Early iPhone design discussions involved putting a rotary-phone like dial around the iPod click wheel — an idea sparked by the Samsung SGH-E910.

We've seen a number of early iPhone prototypes come out as evidence in the Apple / Samsung trial, but today we got our first glimpse at the very beginning of the iPhone process in 2005, when Apple was considering grafting a phone onto the existing iPod line. We now know that's literally true — early discussions involved putting a ring of number keys around the iPod click wheel. "This may be our answer," said Steve Jobs in an email to Jony Ive. 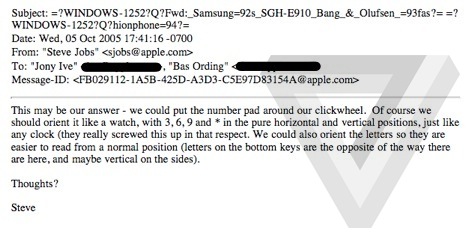 As it happens, in 2005 Samsung and Bang & Olufsen had just released the SGH-E910 "fashion phone" with a similar arrangement, and iPod head Tony Fadell sent an Engadget blog post about the phone to Jobs and other Apple execs. "Weird way to hold the cellphone," said Fadell, but using the round center control pad "seems comfortable." Upon seeing the design, Jobs was typically direct. "This may be our answer — we could put the number pad around our click wheel," he wrote to Jony Ive and Apple designer Bas Ording. "Of course we should orient it like a watch, with 3, 6, 9, and * in the pure horizontal and vertical positions, just like any clock." Jobs was harsh about Samsung's button placement, saying "they really screwed this up in that respect." 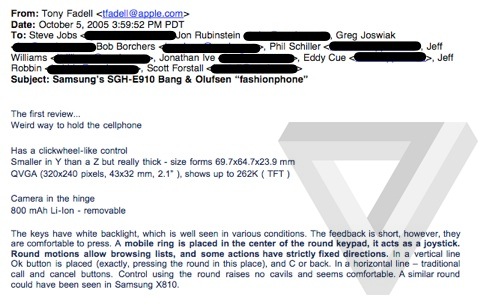 Samsung brought the email out in order to show that Apple is also inspired by Samsung designs, although it's fairly indirect evidence — none of this bore fruit, and Apple quickly dropped the "iPod plus phone" approach to focus on the touchscreen concept that eventually became the iPhone. But it's an interesting look at the early genesis of the iPhone project, and it definitely makes Jobs' joke "reveal" of the first iPhone in 2007 that much funnier.