AT&T has opened its first "flagship" store in downtown Chicago, but what effect might it have on this oft-maligned brand?

Americans: when you think of AT&T, what comes immediately to mind?

For many, the answer might involve a four-letter word or two. Huge tech corporations are rarely celebrated for their attention to quality and customer service — Apple, perhaps, is the most notable exception — but AT&T often takes a particularly hard rap: its policies seemingly generate a revolving door of consumer angst. In many markets, spectrum exhaustion and a proliferation of data-hungry devices render the network nearly useless at times. Its service pricing makes no attempt to compete with value brands like Sprint and T-Mobile. Talk about AT&T long enough, and the derogatory term "duopoly" will probably come up in the conversation.

Indeed, image upkeep is a constant challenge for AT&T and companies like it, and it probably doesn't help that many subscribers' very first interaction with the brand — the place where they buy their handset and sign their life away to a two-year contract — is in a cold, bright, stark corporate-owned retail store trimmed with loud orange accents. So you can probably imagine my surprise when I stepped into AT&T's first "flagship" store, which is currently under construction on the ground floor of a building at the corner of Michigan and Ontario in Chicago's Magnificent Mile district. It opens this Saturday, September 1st.

"The entire store is finished in reclaimed teak wood," said Kent Mathy, president of AT&T's Central region. Teak is a very resilient, beautiful, and expensive wood long prized for its resistance to rotting, and it's kind of hard not to love anything that's covered in it. But Mathy placed his emphasis on "reclaimed" — it's one element of the store's eco-friendly construction, which also involves energy-efficient lighting and appliances. He tells me they're shooting for LEED certification next.

Of course, the attention to materials is just one small aspect of what makes this store — which lies on one of the busiest urban shopping corridors in the world — unique. First off, it's huge, clocking in at some 10,000 square feet underneath the enormous, ultra-touristy Grand Lux Cafe restaurant. Walking around, I estimated that you could probably fit the retail floor space of four traditional corporate-owned AT&T stores inside of it, maybe more. The front of the store holds a portrait-oriented big screen and a small stage that Mathy says is wired for product introductions; in theory, AT&T could roll out new phones or accessories right here, though it seems unlikely that Chicago is the best venue for anything other than minor launches.

Further back, a long counter in front of a wall of staggered monitors of various sizes holds tethered examples of popular AT&T devices: an iPad, an Atrix HD, several others. Each can send video up to the monitors, which store reps can use to demonstrate features or offer how-tos to a group of people. Nearby, Micosoft PixelSense tables show floating bubbles of app categories — passers-by can tap them to expand and explore. Multiple people can use the tables at the same time. AT&T has experimented with PixelSense (née Surface) for several years, so it's no surprise to see them here.

A series of "Lifestyle Boutiques" stock accessories that cater to specific interests — fitness, for instance — and essentially everything that you see on display can be purchased in store, including oddities like the Fitbit Aria and phone cases designed for bike handlebars. I didn't take an inventory, but I got the impression that quite a few of the items weren't stocked in your average location. In the back, cubbies (they look a bit like cozy booths in a restaurant or bar) can be used by reps and customers who need to have longer discussions, while a "Gallery" area highlights custom accessories by selected artists that can only be purchased here. At launch, the artists on display are Cody Hudson and Dalek. Around the corner, a Nissan Leaf (which features AT&T connectivity) sits in front of yet another jumbotron. A few feet away, booths showcase AT&T's U-verse and Digital Life services. Digital Life isn't yet available in Chicago — and AT&T was unable to tell us when it would be — but you'll be able to get a preview of it here.

It's easy to see how you could kill an hour in the store without necessarily buying anything, just messing around with products and accessories. It's a cool space. It reminded me that when Garmin's flagship store opened several years ago just a couple blocks away, the company mentioned to me that it viewed the facility as a showroom as much as anything else — if customers came in and bought things there, that was great, but if they just wandered around and left to buy some Garmin products elsewhere, that was fine, too. Mathy was less diplomatic. "We want customers to buy stuff," he told me.

And buying is another area where the new flagship sets itself apart: there's no retail counter out in the open, just a bunch of wandering sales reps with tablets that they can use to make sales (though there's a dedicated counter tucked away in a corner where reps can process more complex transactions if necessary). If that sounds familiar, it should — it's the Apple model, something that more and more retailers have begun to experiment with in recent years in an effort to fight the "Amazon showroom" effect. I coyly asked how the store would be equipped to handle "extremely popular new products," and while Mathy wouldn't give me specifics, he said they were ready to handle a ton of foot traffic. "You can see how big the space is," he said. 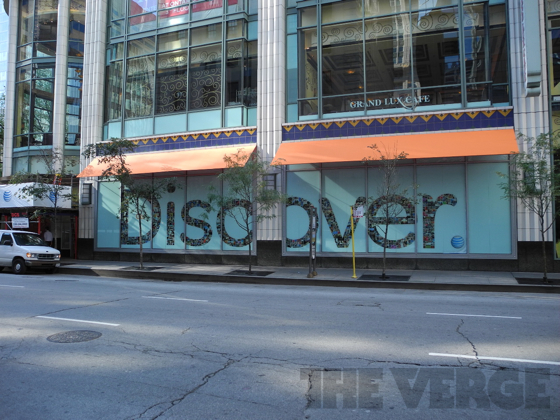 Downtown Chicago's famously poor AT&T HSPA service struck me as a possible Achilles' heel to making this whole concept work, but Mathy pointed out that they've got boosted HSPA and LTE signals ready to go on the show floor. Once you set foot onto Michigan Avenue, you're still on your own — and believe me, it can be brutal — but at least the sales reps won't be fighting stalled connections all day.

Are giant, beautiful, teak-clad stores the magical elixir for all of AT&T's public image problems? Absolutely not. First off, they'd have to commit to building a few more; the Chicago location is the only one and the company isn't talking about any plans for others in the works. But you know what they say about first impressions — and a leisurely buying experience in a big, uncrowded space makes for a pretty great first impression.