In a little over a week, we have seen three companies make headlines with 84-inch, 4K-resolution TVs for the consumer market — LG's set is out now in Korea with global expansion in September while Sony's XBR-84X900 will be available "this holiday season." Toshiba's own "Quad Full HD" (presumably 3840 x 2160) television won't be making it out this year, but a first half 2013 release still makes it one of the first to break the new upper echelon of resolutions.

Powered by Toshiba's CEVO Engine 4K, the TVs on display at its IFA booth are an impressive sight, especially bright colors and larger landscape shots (the accompanying press release implies Google Maps compatibility). A Toshiba representative tells us the TV set is due out first half of the year for both US and Europe, with pricing not likely to be announced until CES. 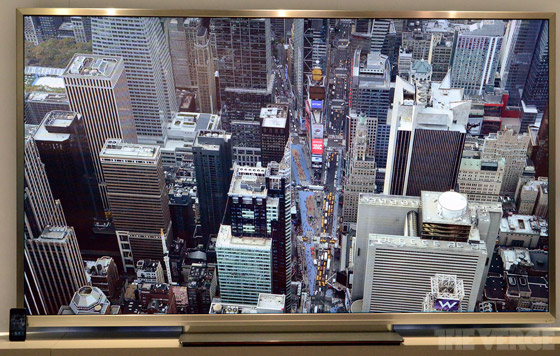 Pictured next to an iPhone 4 (lower left).

More from this stream Best of IFA 2012: live from Berlin