Cadillac CUE: driving is safer (and more dangerous) than ever

Does Cadillac's new in-car entertainment system make drivers better or worse than they are today?

Share All sharing options for: Cadillac CUE: driving is safer (and more dangerous) than ever

No in-car technology should ever compromise safety. Optimally, every new technology that a manufacturer introduces should actively improve safety and make us better drivers — and that's a particularly relevant point as auto manufacturers seem to be introducing new features and capabilities at a faster pace than they have since the formative years of the automobile. So when I was offered an opportunity to try the new Cadillac XTS, I jumped on it.

Could it keep me more focused on the only task that really matters — driving?

This isn't really about the XTS itself, though (it's a superb car, by the way, possibly one of the best that General Motors has ever made). I recently spent a week with Cadillac's latest flagship because it's the first car to launch with CUE, a stack of hardware and software that manages virtually every aspect of a driver's interaction with the machine. It's part of a larger trend in the auto industry that's given rise to systems like BMW's iDrive and Ford's MyFord Touch over the last several years, but CUE might be the most ambitious effort yet to transform the way we command our cars and interpret the data that they're communicating to us as we drive. I wanted to know how it affected driver attentiveness. Could it keep me more focused on the only task that really matters — driving?

I may not write for Car and Driver, but it doesn't take the honed senses of a grizzled auto journalist to know that when you're sitting in the Cadillac XTS, you're peering at bits and pieces of the future. The core of the CUE system is an 8-inch touchscreen mounted in the center of the dash that flows into a set of touch-sensitive buttons below for controlling basic audio and ventilation functions. This entire assembly appears to be a single piece of glossy black plastic; as you run your finger between the display and the buttons, there's no seam. Everything runs together. The effect is broken only by a series of silver-tone ridges below the buttons; a Cadillac engineer noted to me that the ridges aren't touch-sensitive, they exist only to guide your finger to the actual buttons.

CUE's most fascinating features, though, are in the details. The center stack is entirely capacitive and has haptic feedback — touching a button or on-screen control will cause the entire stack to give off a quick, powerful nudge that can be clearly felt (in fact, if your leg is resting against the console, you'll feel it there, too). A proximity sensor below the display detects when your hand is approaching and changes the UI to show menus and other buttons that you'd want cleared when you're merely looking at the screen rather than interacting with it. For instance, when you're just looking at a map of your current location, you don't want to see zoom controls or menu items for selecting a destination — you just want to see as much map as you possibly can.

CUE's most fascinating features are in the details

A GM spokesman was quick to point out that preliminary work on CUE began in 2008 — "this was before the iPad," he noted — but regardless, it all feels as though it was almost certainly inspired by the smartphone revolution of the last five years. That's a good thing: familiarity and consistency between a user's phone, tablet, and car mean that they're less likely to become confused and frustrated while driving. If you're frustrated with a tablet's user interface, it's merely an annoyance; frustration with a car's UI, though, can be a matter of life and death.

And so these are the kinds of details that I thought might have a real, measurable benefit to driver safety. Capacitive touchscreens are less frustrating to use than resistive ones, which means you'll spend less time fiddling with them while driving. The proximity sensor keeps unnecessary UI clutter out of the way. Haptic feedback gives you instant confirmation that your command has registered. 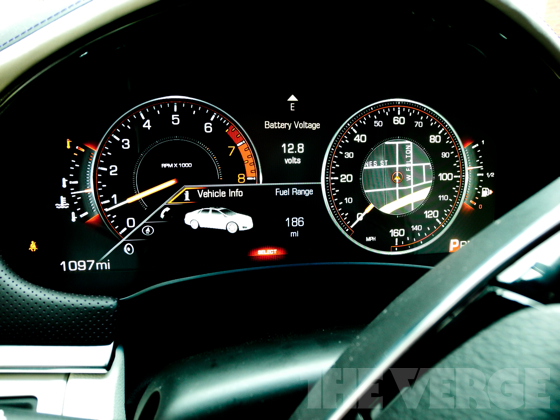 My review car was also equipped with CUE's optional 12.3-inch digital instrument cluster, which entirely replaces the traditional analog gauges with a large LCD that can be reconfigured to your liking. There are four layouts available — ranging from simple to performance-oriented — and individual data fields (like tire pressure and radio station information) can be configured within each layout. Daylight viewability was a bit of a concern for me, but it proved entirely unfounded — it was perfectly readable in all conditions. The resolution and refresh rate are high enough so that the simulated analog gauges (for speed and RPM, for instance) sweep perfectly smoothly and are hard to distinguish from an actual analog cluster.

Fiddling with the instrument cluster is fun. What's my battery voltage? What's my current fuel economy? You can even set it to show a scaled-down version of a map so you don't need to glance at the center screen to get a sense of where you are. But this is where I started to feel like CUE wasn't a slam dunk for safety: the car prevents you from changing layouts unless you're in Park, but there's no prohibition on changing data fields, which can sap nearly 100 percent of your attention from the road for multiple seconds at a time. It's made worse by an awkward steering wheel-mounted directional rocker for making selections that I found difficult to use.

And it turns out that the touchscreen in the center stack can be just as frustrating. The display is large enough so that I was unable to reach the far end of it without physically leaning forward in my seat. At speed, there's enough movement and vibration in the car so that you need to devote some amount of concentration to hitting the right area of the screen for whatever function you're trying to select. I came away with the impression that cars with remote controllers mounted beneath the driver's hand at rest — systems like iDrive, Mercedes' COMAND, Audi's MMI, and Lexus' Remote Touch — are considerably safer for this reason alone: the driver doesn't need to reach for anything, nor is there an element of precision in making your selections. Cadillac claims that the three-core processor it's using in CUE is the most powerful in a production car, but stuttery UI animations and delays of as long as five seconds between commands (in my experience) mean that the driver definitely has his or her eyes on the screen longer than they absolutely need to.

Cadillac isn't unaware of the risks: many commands are locked out while the car is in motion, but the lockouts are inconsistent. For instance, attempting to type in a destination address while moving doesn't fail until the QWERTY keyboard is already up on the screen and you're trying to type your first letter. Why am I even able to get that far? It's the same story with searching for points of interest: you can do so, and it's not until you try to scroll the list of matching POIs that you're warned that the car is moving. CUE is also equipped with a voice command system — sourced from Nuance, of course — but I found that it didn't register commands with 100 percent accuracy (and to be fair, no in-car voice command system I've ever tried has been perfect). It also seems to be incapable of controlling the climate, something I learned after barking variations of "warmer!" over the course of several minutes on the road. A spokesman acknowledged that voice control will continue to improve over the next several years; CUE's is a good start, but it's not the magic bullet for keeping drivers' eyeballs out of the UI. 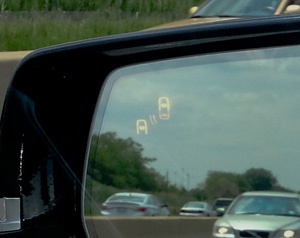 Coincidentally, CUE's safety shortcomings are counterbalanced by a long list of unique and genuinely helpful safety-focused technologies. A blind-spot warning system shows an orange icon in the side mirror when there's a car present that you can't see (it worked terrifically well, and I'm already disappointed to go back to a car that doesn't have it). Powerful motors in the driver's seat vibrate on either side to warn you when you start drifting out of your lane — if you're falling asleep or spending too long playing with CUE, for instance — or when a front-mounted collision sensor detects that you're approaching a car too fast. A heads-up display keeps your eyes on the road if you're looking for current speed, navigation instructions, or radio information; it can even tell you the speed limit of the road you're on.

So what's actually happening is that automakers seem to be adding features that distract the driver (or at least have the potential to distract the driver) at roughly the same pace as features with a measurable safety benefit. It's a wash: sure, you might spend a few too many seconds trying to find the closest McDonald's, but don't worry about it because the lane departure warning system will vibrate your seat if you get into trouble. It's strange to think that the very computer that's stealing your attention is also looking out for you. 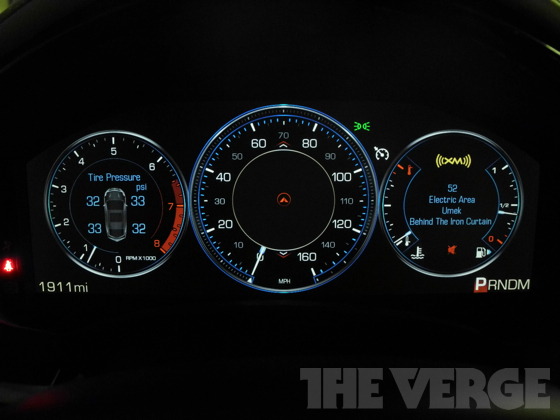 That's not to say that we should stifle innovation that isn't directly related to driver safety — CUE is an amazing platform for entertainment and comfort. These are solvable problems. It's easy to imagine how a next-generation CUE or CUE-like system could almost completely eliminate the potential for driver distraction by removing unnecessary visual chrome and animations, throwing more processor power at the software to make sure that commands are instantaneous, and by doing a far better job of locking down functionality available while the car is moving (in fact, you could even envision an intelligent system that would allow the passenger to enter commands while using sensors to selectively lock out the driver).

GM and its competitors are making efforts to self-regulate

The government has always lagged the automotive industry in recognizing and logically regulating new technology. It's just now starting to take notice of the fact that many cars come equipped with large touchscreens, for instance: new multi-phase NHTSA guidelines start by calling for QWERTY input to be prohibited when the vehicle is in motion. But the guidelines don't go far enough, quickly enough — and they're merely guidelines, not laws. GM and its competitors are already making efforts to self-regulate, but a very technology-savvy set of federal laws and restrictions — forged both by regulators and private industry, who've been researching these systems for years — would do wonders for protecting drivers, passengers, and the people around them. They could even help drivers transition between cars from different manufacturers by standardizing the way certain systems and UI elements operate, so as to reduce confusion on the road.

In the meantime, CUE is an awesome first attempt for GM at creating a holistic, upgradeable, app-friendly system for cars that the iPhone generation can identify with. I just hope you're learning it in your garage, not at 70 miles per hour.