Apple's expert witness struggles as Samsung goes on the attack

Apple's expert witness Peter Bressler took the stand this morning to explain the investigation he conducted between Apple's design patents and several Samsung devices that he feels infringe upon them.

Share All sharing options for: Apple's expert witness struggles as Samsung goes on the attack

Apple's first expert witness took the stand today to outline what appeared to be damning similarities between the company's design patents and several Samsung devices — but Samsung responded with a lengthy and detailed cross-examination that may have left the witness damaged in jurors' eyes.

The day began with Justin Denison picking up where his testimony left off last week, and was grilled by Apple's legal team on whether the strategy officer had ever asked Samsung designers if they had destroyed materials documenting their design process when creating the accused devices. Denison stated that he had no reason to ask that question, but Apple has called out Samsung for destroying evidence more than once — and the company has been sanctioned by the court for its practices.

Denison was shown notes from an internal Samsung communication reacting to the iPhone, which stated that top executives felt the company was facing "a crisis in design," and that when looking at the user experience of its own Omnia phone, "compared to the unexpected competitor Apple's iPhone, the difference is truly that of Heaven and Earth." Denison claimed the phrasing was simply hyperbole, intended to rally Samsung's troops internally, and didn't represent a true response on the part of the company's executive team.

"The design of this phone would be considered substantially the same."

Apple then called industrial designer Peter Bressler, who walked the jury through three of Cupertino's iOS design patents and explained the specific details covered in each. Several different side-by-side comparisons were shown in the courtroom during Bressler's testimony, putting illustrations from Apple's iPhone patents up against the Galaxy S 4G. "It's my opinion that this phone, the design of this phone would be considered substantially the same" when viewed by regular consumers, Bressler said. Apple's legal team introduced a similar comparison between the Galaxy Tab 10.1 LTE and Apple's iPad design patent, with Bressler also pointing out several "alternative designs": tablet computers on the market that feature designs that are clearly different from Apple's device. Bressler was also asked about an internal Samsung sales research document, which noted that Galaxy Tab 10.1 devices sold at Best Buy outlets had been returned due to consumers thinking they had purchased an iPad 2. 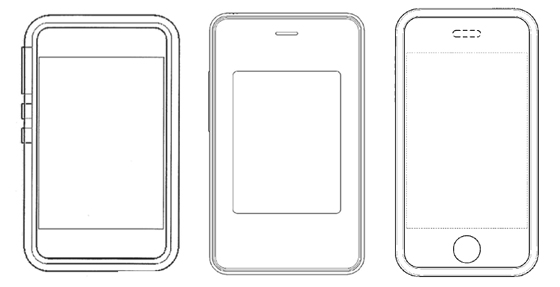 Samsung fired back during cross-examination, with counsel Charles Verhoeven bringing up no less than four different examples of prior art that bore similarities to the iPhone's front face. Bressler resisted the line of questioning, calling the comparison an "improper analysis," pointing out that one should look at all eight patent illustrations when evaluating prior art, rather than the single, straight-on image that Samsung was using.

Verhoeven then attacked the importance of both the original iPhone's bezel and its flush glass face — two elements designer Christopher Stringer underscored in his testimony last week. Again, Bressler reiterated his point that the standard was not to focus on individual design elements in isolation. "I believe the ordinary observer should be getting an overall impression of what the design of the phone is," he said. "I don't believe they should be examining teeny details the way you're doing."

"You're asking me to compare peanut butter with a turkey."

Samsung went so far as to make it a game of millimeters — literally — by pointing out differences in the radial measurement of the corners on one of its devices versus the iPhone. After Samsung's deep dive into granularity, Bressler's frustration continued, eventually causing him to complain, "You're asking me to compare peanut butter with a turkey."

After continued questioning the cracks began to show

Verhoeven continued his attack on Bressler's testimony, even bringing up the much-discussed Samsung F700. Bresssler had referred to the device in his report as an example of a device that was different enough from Apple's patents to not infringe, something that Samsung was eager to capitalize on given the similarity between the F700 and some of the company's other devices.

After continued questioning by Verhoeven, cracks began to show. First Bressler appeared to contradict his own deposition testimony as to whether he had expertise in smartphone functionality, followed by a lengthy back-and-forth about the reflectivity of the back of the Galaxy Tab. According to Bressler's testimony earlier in the day, the iPad design patent illustrates a device with a shiny or reflective back. The Tab has a matte finish, but Bressler insisted the patent still describes the device — prompting Verhoeven to approach the witness and ask if he could see his own reflection in the back of the device.

Another small hiccup — which had nothing to do with patents at all — may have had the most direct impact on Bressler's credibility, however. After stating that he wasn't promoting his consulting services outside of an industry directory, Bressler was asked about his personal website, which he claimed was under construction and not accessible. Verhoeven responded by showing the jury Bressler's site, live and accessed directly from the web. To be fair, going to Bressler's domain name does bring up a generic "under construction" placeholder, with the information shown in court available only from a subsite — but that distinction was not made in court.

With so much of Apple's design patent infringement case seemingly resting on testimony like Bressler's, it's hard to minimize the day's events, but fortunately for Apple the company's legal team will have the opportunity to question him further tomorrow. He'll be followed by Susan Kare, a graphic designer responsible for some of the original Mac's classic icons. We'll be in court to let you know what happens.