After having successfully landed on the Mars yesterday, NASA's Curiosity rover has now begun transmitting images taken during its dramatic descent.

After having successfully landed on the Mars yesterday, NASA's Curiosity rover has now begun transmitting images taken during its dramatic descent. The craft's onboard Mars Descent Imager (MARDI) captured a total of 1,054 images during Curiosity's landing, 297 of which were beamed back to Earth on Monday. These early color photos are of low resolution, though when sharpened and combined with the remaining images, they should provide a more fluid depiction of Curiosity's entry and descent into Gale Crater.

For now, NASA has arranged these 297 thumbnail frames to create a stop-motion video of Curiosity's arrival on Mars, providing an abbreviated glimpse at the last two and a half minutes of its descent. The clip, embedded below, is of admittedly fuzzy quality, though its dusty finale certainly packs plenty of drama, with the craft's thrust rockets kicking up clouds of Martian soil.

Curiosity's MARDI camera began snapping these images as soon as the craft's heat shield peeled away. Those selected for early downlink to Earth depict the craft at various critical points of its landing. One set, for example, shows the craft gyrating as it parachuted downward, while another depicts its heat shield just moments after falling away.

NASA has also closely analyzed these images, and has discovered details that may have been obscured in the first batch of photos it received. The following photo, for instance, was taken by NASA's Mars Reconnaissance Orbiter (MRO), and depicts Curiosity as it parachuted to Mars. It seems largely similar to the image NASA released yesterday, though at the bottom is a small black speck that the MRO team believes to be Curiosity's heat shield, still in free fall after being ejected. 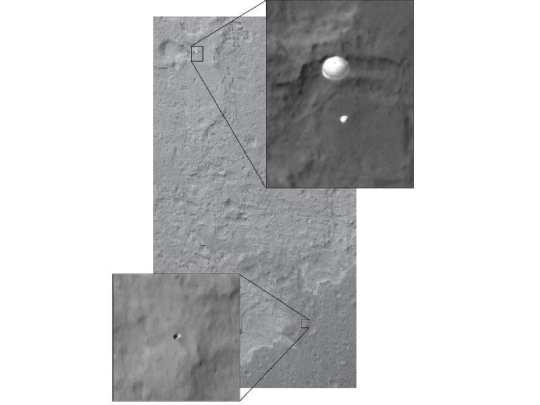 At the moment, NASA's MARDI images are of just 192 x 144 resolution, though as communications improve, the agency hopes to retrieve full-size, 1600 x 1200 photos. Yet even in its relatively crude state, NASA's early imagery has already sparked a palpable sense of excitement among researchers, who believe these photos could have an impact that goes far beyond the realm of Curiosity's mission.

"The image sequence received so far indicates Curiosity had, as expected, a very exciting ride to the surface," said Mike Malin, an imaging scientist at San Diego's Malin Space Systems. "But as dramatic as they are, there is real other-world importance to obtaining them. These images will help the mission scientists interpret the rover's surroundings, the rover drivers in planning for future drives across the surface, as well as assist engineers in their design of forthcoming landing systems for Mars or other worlds."

You can browse through more imagery over at NASA's Curiosity photo gallery.