An interview with Marek Rabas, CEO of Madfinger Games, who recently decided to cut the price of zombie FPS Dead Trigger in response to what he describes as rampant piracy on Android

As the maker of the popular Samurai and Shadowgun titles, Madfinger Games has built a decent following among mobile gaming fans, but its biggest moment in the spotlight came when it openly bemoaned Android's piracy rate as being "unbelievably high." That complaint came just as Madfinger was lowering the Android price of its zombie shooter Dead Trigger from $0.99 to free, in a re-pricing move that has also been repeated on Apple's iOS platform.

I've been exchanging emails with Madfinger's CEO, Marek Rabas, in the time since then, and trying to understand the motivations and challenges underpinning these decisions. Just how do you monetize content if the greater proportion of your audience is consuming it without paying the asking price?

"We didn't want to punish iOS players for the lower piracy rate on iOS."

It's probably best to start off with the statistics behind Madfinger's claims of rampant piracy: in the period before it was made free to download and play, some 80 percent of Dead Trigger's players on Android and 60 percent of those on iOS were apparently playing pirated copies. The company gets these measures by comparing analytics data it pulls in from Flurry and Localytics against the official sales reported by Google and Apple. Its higher-end games, Shadowgun and Samurai II, hardly fare any better, hitting peaks of over 90 percent and 87 percent pirated copies in their first couple of months of availability.

In short, selling games, even at throwaway prices like 99 cents, seems to be a fool's errand so long as users are able to circumvent the given app store's defenses and obtain them for free. And, although the iOS price reduction was not accompanied by any more blunt outbursts from Madfinger itself, the challenge there is not a million miles away from the daunting task the company faces on Android.

Being a small independent developer, says Rabas, allows his company to experiment with various pricing models. Even before it went free, Dead Trigger was a game heavily reliant on in-app purchases as a revenue stream. Describing this as a paymium model — one where you're paying for both the app and premium in-game items — the Madfinger CEO opined that it seemed to strike the right balance between initial outlay for users (who could then proceed to finish the game even without recourse to in-app-purchases) and additional content for those who wanted it. The only problem, as it turns out, was that many players would rather spend time tracking down a free copy than pay the small entry fee. So now Dead Trigger has been switched over to a free-to-play model, essentially the same thing as before, minus the initial charge.

In the grand scheme of mobile app development, this change is infinitesimally small. Hell, even Madfinger's bottom line is unlikely to be affected materially given Dead Trigger's not-so-subtle focus on in-app purchases. But the real problem may well reside in what happens to the so-called AAA games. As Rabas' experience with Shadowgun has shown, when you try to sell more premium software to such a price-sensitive crowd, you clash with the real problem of piracy:

"Being sold for $8, there was no effective way of defending against piracy."

Without recourse to microtransactions as a way to keep a game profitable, and without people actually paying to play it, the impetus to invest in more development-intensive games is reduced. As far as Rabas is concerned, there's only one entity that can rectify things and that's the platform provider:

"Every producer of a gaming device should help developers with piracy if they want to have great content on it."

That seems fair enough, and the Madfinger boss believes both Apple and Google are making sincere efforts at curtailing piracy within their respective mobile ecosystems, but he's also somewhat short on ideas for how they can step up those efforts. Jelly Bean's app encryption is a move in the right direction, he says, leaving open the question of how to properly educate users about the value of paying for the software they enjoy using. 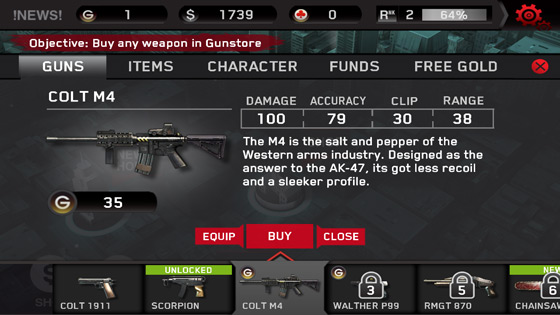 Ultimately, we needn't feel too sorry for Madfinger Games. It's a studio that manages to find ways to generate a profit from its operations and looks likely to continue to thrive. But the signals that we, as users and players, are sending to these game makers are not ones that will lead to higher-quality content being produced. If we make it clear that we prefer spending money in a nickel-and-dime fashion on free-to-play games, that's what we'll get — while the ambitious projects that could truly harness our overspecced mobile devices remain on the drawing board for fear of being pirated to death.