The FCC's cell phone radiation limits are out of date.

Americans are getting pretty cozy with their cell phones. We're on them at work, at home, on the weekends, and even in bed; we're also getting our first phones at a younger age than in the past. There's a niggling notion that all this intimacy with our devices may not be healthy, especially since science has been flip-flopping on the issue for years. The US government has mostly stayed out of the debate, but a federal report released today says it's time to "reassess" the 16-year-old limit on how much radiation may be emitted by cell phones sold in the US.

The Government Accountability Office spent a year reviewing three things: current research on the effects of exposure to radio frequency by cell phones, US law governing the cell phone industry, and to what extent the American public has been educated about potential health risks. The resulting report zeroes in on the radiation limit, which is based on research dating back as far as 1991.

Some research suggests the current radiation limit is too conservative

Cell phones emit radio-frequency energy, and there has been endless debate over whether this radiation can have adverse effects on humans. There is no conclusive evidence that frequent and prolonged use of cell phones is harmful. Still, the Federal Communications Commission set the limit at 1.6 watts per kilogram, averaged over one gram of human tissue — a metric called the specific absorption rate (SAR).

All phones sold in the US must be certified for compliance with this limit, which "provided a proper balance between protecting the public from exposure to potentially harmful RF energy and allowing industry to provide telecommunications services to the public in the most efficient and practical manner possible," the report says.

The FCC's certification process is pretty intense, according to the report:

To test mobile phones, a mold in the shape of an adult torso and head is filled with fluid mixture designed to simulate the electrical properties of human tissue. A phone is placed near the head or torso... and operated at maximum power. A probe attached to a computer-controlled mechanical arm is inserted into the mixture at various locations to measure SAR. This procedure is repeated for a number of closely specified phone positions and operating frequencies.

The process results in two SAR measurements, one for the head and one for the body. The latter test, which was designed to approximate the effect of carrying a cell phone around in a holster, shows that the rules could use some updating. Some research suggests the current SAR limit is too conservative, and that radiation levels could be higher. Raising the limit could make things easier for manufacturers and potentially have implications for industrial design and signal strength. Regardless, the FCC is being asked to formally review and update the limit and testing requirements in order to reflect the latest research. The FCC has initiated the process of revising its rules, and says it plans to address the GAO's recommendations. 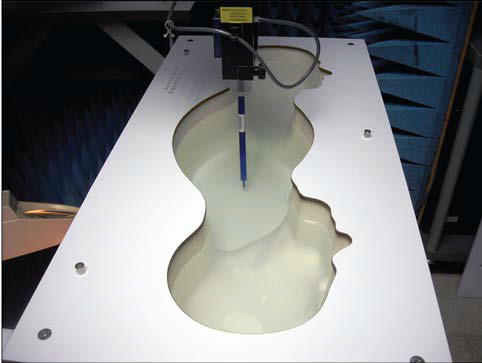 The news comes around the same time as the proposed Cell Phone Right to Know Act, a bill introduced by Dennis Kucinich (D-Ohio) that would slap cigarette-style warning labels on cell phones. (Some cities and states have attempted the same thing, though it has not been implemented anywhere yet. A judge recently scuttled a radiation warning law in San Francisco in one high-profile effort.) Rep. Kucinich compared the dangers of cell phone radiation to the dangers of smoking, which the public was largely unaware of for years.

The authors of the GAO report surveyed the public information on cell phone radiation available from the government and the mobile industry. They don't mention warning labels, but they do note that some consumer groups "raised concerns that the information on federal agency websites about mobile phone health effects is not precautionary enough" given that the effects of longterm cell phone use are still largely unknown. In the meantime, even manufacturers say you shouldn't keep your phone in your pocket. All but one of the users manuals reviewed by the GAO included a warning that phones should be stored 1.5 to 2.5 centimeters away from the body.