Court documents exposed in the Apple v. Samsung case provide a look at confidential US sales numbers for the iPhone, iPad, and an array of Samsung devices.

The Apple v. Samsung trial has already provided a bonanza of inside information on both companies, and the trend continued today with a court filing that revealed US sales numbers for both companies. The document, prepared for the trial by the Invotex Group, lists the US sales numbers for the iPhone, iPad, and iPod Touch, as well as 24 different Samsung smartphones, and three members of the Galaxy Tab line. While Apple usually prefers to tout global figures, in the document we see that the company sold over 85 million iPhones in the US up through the second quarter of this year, with revenue coming in at over $50 billion. Cupertino moved more than 34 million iPads in the same time period, bringing in more than $19 billion in revenue.

As for Samsung, the document covers the time between June 2010 through June 2012, and offers a grab-bag of information. Standouts include the Galaxy S II Epic 4G Touch, which sold 1.675 million units, bringing Samsung $764 million in revenue, and the original Epic 4G, which moved almost 1.9 million units over its lifetime. All told, the Samsung smartphones Apple is accusing of infringement sold more than 21 million units. The charts also reveal how poorly the Galaxy Tab 10.1 LTE did in comparison to the rest of the Tab product line. While Samsung sold 585,000 units of the original Galaxy Tab 10.1, the LTE variant came in at just 125,000.

The trial kicks back into gear tomorrow morning in San Jose where Apple will continue to make its case to the jury — and we'll be there when it does.

Update: As Ars Technica points out, Apple has also included numbers for its more rarely discussed iPod touch line. The iPod touch hasn't seen the same growth trajectory as the iPhone or iPad, but it's stayed strong even as the overall popularity of iPods declines, holding between 10 and 13 million sales each year since 2009 with a total of 46.5 million units. That's about half as many as the iPhone, with substantially lower revenue (roughly $10.3 billion), but people are clearly still buying the Wi-Fi-only devices. 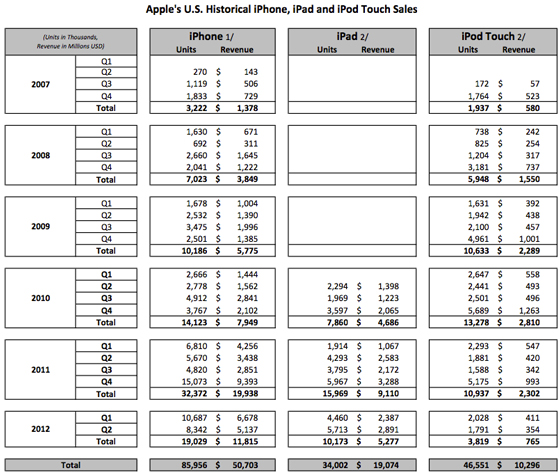