Curiosity's camera project leader explains the decision to put 2-megapixel sensors in Curiosity's Mastcams. Bandwidth constraints and the team's familiarity with the sensor were major considerations.

Chances are good that if you bought a cellphone within the last five years, its camera shoots higher resolution images than those on NASA's Curiosity rover. But in case you forgot, megapixel counts only tell part of the story, and there’s a lot more behind the choice of sensors in Curiosity’s Mastcams than you might guess.

You thought your data cap was bad

Here on Earth, we've grown accustomed to throwing around high-res photos on fast wireless broadband networks, but in order for Curiosity to send images home it needs to rely on plain old UHF, explains the camera project’s manager Mike Ravine to Digital Photography Review. So while a 5GB monthly data cap on your cellphone plan might seem restrictive, Curiosity can only transmit about 31.25MB per day, or less than a gigabyte per month, and that quota has to cover readings from a bunch of other instruments on board. Still, even despite the low bandwidth the team might have gone with higher resolution sensors if the specs for the project hadn’t been settled on eight years ago.

Other big considerations were the sensors’ reliability and the team’s familiarity with them. The same Kodak Kai-2020 sensor is in four different cameras on the rover, giving the team a common platform to work with. "They’re a very easy CCD to drive," explains Ravine. And while today’s cellphone cameras get great results with low-power CMOS chips, "the state of CMOS sensors wasn’t credible in 2004," says Ravine.

Despite the cameras’ comparatively low resolution, many photos can be stitched together to create panoramas, just like today’s 360-degree capture of Gale Crater below, the first to make it back from Curiosity. It's just too bad the concerns about wet lubricants kept James Cameron's dream of zoom lenses (and 3D movies from Mars) grounded. 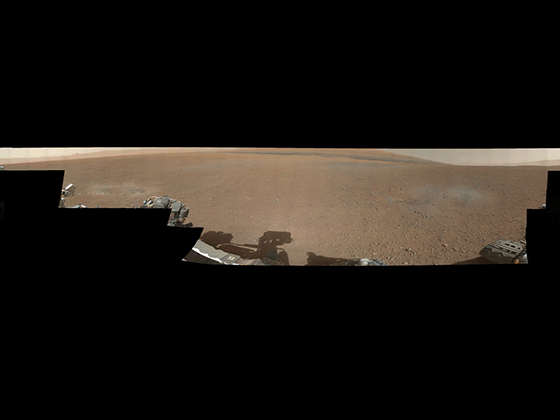