Hands-on with Emotion UI, a custom Android 4.0 skin from Huawei.

After years of releasing carrier-branded devices, Huawei is making a push for recognition in its own right. Along with a high-end flagship phone and a team dedicated to teaching Americans to pronounce its name, the phone maker recently released the Chinese version of Emotion UI, an Android 4.0 skin for its Ascend P1, P1E, and Honor phones. At IFA, Huawei is showing off a P1 with Emotion, giving us a look at the new skin.

While there are plenty of extra themes, it's possible to keep most of the look and feel of stock Android on Emotion. Changes come either in the form of extra apps and services — including baked-in cloud storage and the Profiles feature, which allows for quick switching of volume, network, and other settings — or as tweaks to the way settings and features are accessed. Although there's a surprising amount of customizability, it's clearly designed to be friendly to first-time users: among other things, a dedicated help center offers tutorials for uninstalling apps, using gestures, and accessing settings. The notification area also includes more setting toggles than in stock Android. 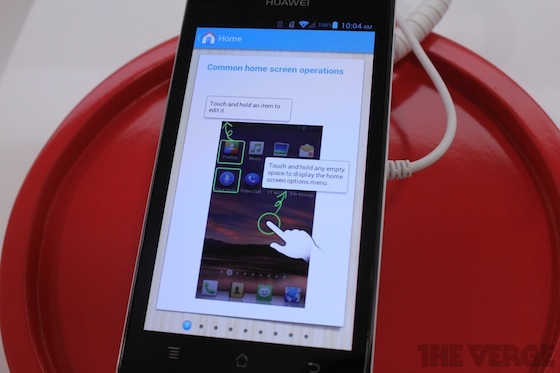 The most obvious difference between Emotion and stock Android is the exclusive focus on homescreens. There's no app drawer; instead, applications are moved and uninstalled directly from their homescreen. Widgets, meanwhile, can be added by pressing and holding a blank section of the wallpaper. If you're used to Android already, these changes are a little confusing, but they also mean all your apps and widget options are right up front, another potential benefit for new users. Unfortunately, we weren't able to find a way to switch to stock Android, so buyers may simply have to get used to Emotion's way of doing things.

Most of the widgets aren't so different from what you'd see on Ice Cream Sandwich, with one exception: the "Me Widget." Essentially, it's a folder of grouped widgets that the user can customize and then move as a single unit, ostensibly providing quick access to favorite contacts, photo galleries, or the music player. In practice, it didn't seem much better than just adding individual widgets, but since using it is optional, it also isn't annoying or distracting. 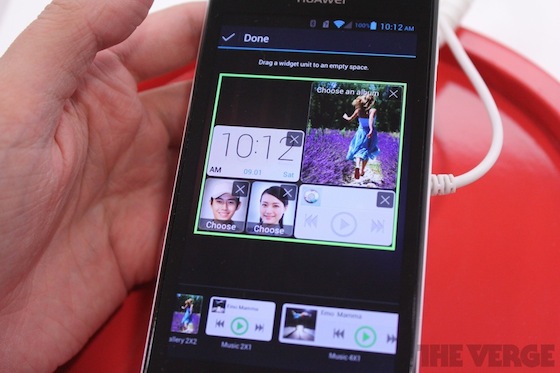 Somewhat more helpful is the Profiles app. Emotion comes with presets for things like driving, attending meetings, or going outdoors, a common feature phone option that never really took off on smartphones. Adding new profiles or changing an existing one is intuitive, and a button in the notification tray brings up a wheel to toggle between them. As with the Me Widget, it's fairly easy to ignore, but we could actually see it being useful if you want to change a whole batch of settings at once. The final version is also supposed to have a series of "smart triggers," which activate profiles automatically when they detect something like a specific location or a low battery level. Unfortunately, that didn't seem to exist in the version we tried. 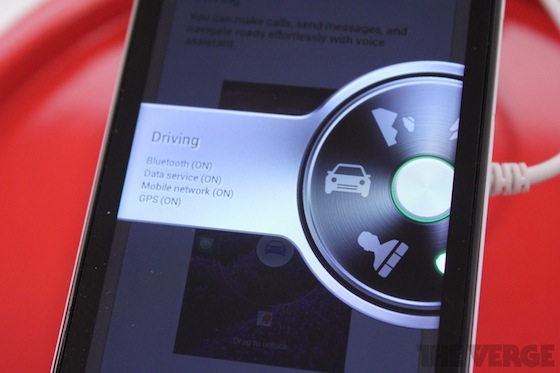 Chinese-speaking users will find a few extra options in Huawei's custom input settings. Most prominently, you can toggle various shorthands for romanized Chinese characters, and the phone supports typing in a mix of Chinese and English. Since a non-Chinese version of the UI isn't expected to launch until the fourth quarter of 2012, we're not sure if other languages will get similar options.

Emotion probably isn't a skin I'd choose, and the apparent inability to turn it off is an annoying change for Huawei. That said, there's a consistent logic behind it, and some of the extra features could be genuinely useful. If Huawei wants to differentiate its phones from other Android devices, there are certainly worse ways to do it.