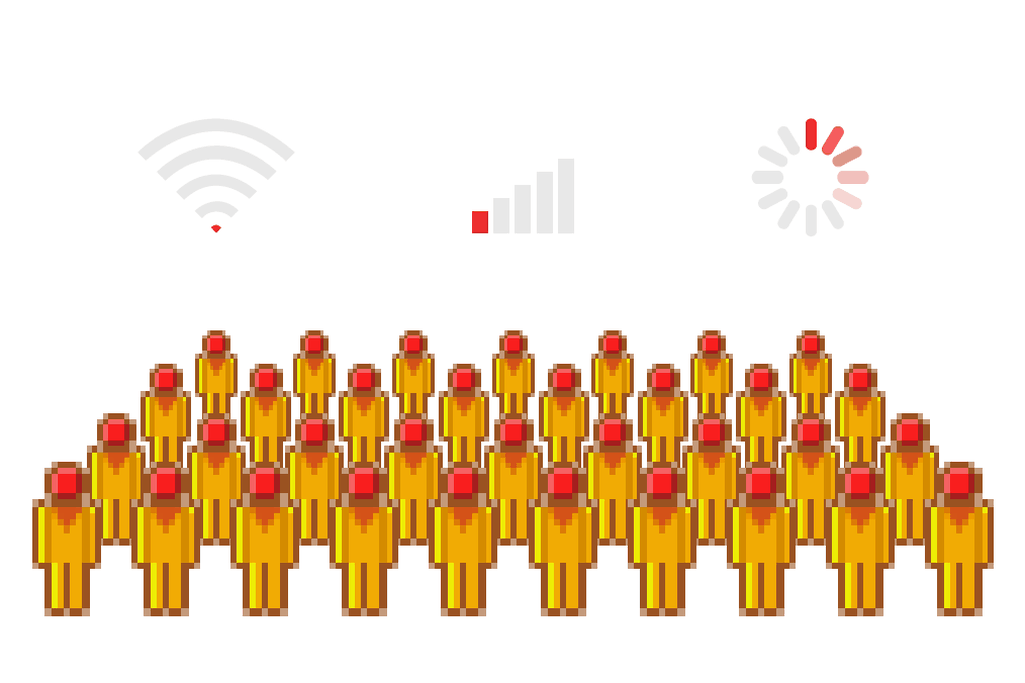 In 2009, Louis C.K., a comedian known for tackling politically charged subjects from gay marriage to white privilege, went on Conan O’Brien and delivered one of his most famous impromptu sermons:

Now, we live in an amazing, amazing world, and it’s wasted on the crappiest generation of just spoiled idiots that don’t care because — this is what people are like now, they got their phone, they’re like, “[imitates someone thumbing a BlackBerry] Ugh! It won’t…” Give it a second! It’s going to space! Can you give it a second to get back from space? It’s the speed of light!

The comedian elaborated on the video in an interview later that year on Opie & Anthony: “The thing is that people expect things… people think it’s in the Constitution that they just have a clear signal without any interruptions.”

I’ll be the first to admit that there are much, much more pressing global problems at the moment than the accuracy of your phone’s GPS signal, or the economics of flying cars. But that doesn’t mean we shouldn’t keep pushing the boundaries of what’s possible.

Unfortunately, the limits of consumer technology aren’t always constrained by the physical limits of the universe, as Louis C.K. implies at the end of the quote. Rather, the adoption of new technologies is driven by a complex interplay between industry leaders, government regulatory bodies, and the realities of the consumer market. And even though our nation is slowly moving towards a better future, the path is full of twists and turns — and more than a few dead ends.

Why your phone’s GPS sucks

I traveled to Italy earlier this year with no data service. (Protip: don’t travel without data service unless you plan on writing a pithy blog post afterwards about how wonderful it was traveling without data service.) Wandering the streets of Rome with nothing more than a glossy map and the sun to guide me, I felt something akin to the blind man in Apple’s “Making a Difference” video from the WWDC 2012 Keynote. In the spot, the man explains how he was unable to wander the woods outside his home in Germany until he discovered the Ariadne GPS app. The accessible navigation app literally serves as his eyes when hiking without the need for a guide dog.

The Global Positioning System is a rare example of international space cooperation, and its applications are diverse and far-reaching. It keeps boats from getting lost at sea, guides researchers through areas that would otherwise be impossible to navigate, and helps us make friends nearby.

Eventually, GPS will replace instrument landing systems (ILS) in aircraft, which will allow planes to perform much more precise flight patterns. The NextGen Air Transportation System will seriously improve flight times; with GPS tracking, more planes can be in the air at once, flying on less fuel, with dramatically reduced takeoff and landing times. Efforts to develop the system could be hurt by budget cuts next year, however, stalling progress on the $42 billion project.

While over-reliance on GPS may not be the best thing for our brains, it’s still a small (but daily) irritation when using maps on a smartphone to have to wait for the signal to home in. This is known as a “cold start”, and affects all GPS hardware to varying degrees.

The iPhone uses Assisted GPS (A-GPS), and Android users can enable the feature in the Location & Security Settings. A-GPS uses cell tower and crowdsourced Wi-Fi network location data to save battery life and reduce the duration of the cold start. Still, it’s not instant. And while, as Louis C.K. noted, it is going to space, there’s no way soldiers are waiting a few seconds for a location while being shot at.

As it turns out, the U.S. military has its own standard when it comes to GPS. Meet the Defense Advanced GPS Receiver (DAGR). Even if you managed to get your hands on one of these — which would be completely illegal — you’d still have to at least skim through the unit’s 300-page manual in order to pass this test from the U.S. Army Soldier’s Manual of Common Tasks. So what makes the DAGR so much more useful than the GPS units available to civilians? To start, it uses a more precise (and encrypted) signal unavailable to the public:

The C/A code is a 1,023 bit long pseudo-random code broadcast at 1.023 MHz, repeating every millisecond. Each satellite sends a distinct C/A code, which allows it to be uniquely identified. The P-code is a similar code broadcast at 10.23 MHz, but it repeats only once a week. In normal operation, the so-called "anti-spoofing mode", the P code is first encrypted into the Y-code, or P(Y), which can only be decrypted by units with a valid decryption key.

In addition to the more accurate signal, DAGR units provide real-time position, velocity, navigation, and timing information, and are better-equipped to handle moving targets. It’s also equipped with some niche features, like azimuth detection, which along with elevation data helps soldiers perform the calculations needed for engaging in indirect fire.

Most of us don’t need (and aren’t allowed) to use the encrypted P(Y)-code GPS signal that the DAGR uses. But there is hope for the future of consumer GPS signals. Beginning in 2014, the U.S. Air Force is scheduled to begin launching next-generation GPS III satellites built by Lockheed Martin. Besides transmitting the ultra-high-accuracy and jam-resistant M Code signal for military use, the new satellites will transmit a range of new civilian signal types designed to improve navigation for “safety of life” GPS applications (e.g., aeronautical navigation) and augment the existing Civilian L1 (L1C) signal used by consumer GPS units and mobile phones.

Why your car doesn’t fly

With the possible exception of the jetpack, no other means of transportation has captured the popular imagination in the twentieth century more than the personal air vehicle (PAV).

Still, for all the consumer interest, it’s 2012 and nothing is even close to market. NASA announced in 2005 that the year’s Centennial Challenges program would focus on PAVs, and awarded the winners two years later, but none of the winners has released a commercial product. Boeing announced that the company was researching the feasibility of PAVs in 2004, but has announced nothing since then except this concept video from 2011.

So why aren’t flying cars available yet? One reason is that the definition of “street-legal” varies from country to country, and in the U.S. from state to state. While this allows for a considerable amount of variation in vehicle designs, it also places a number of design constraints which normally don’t apply to aeronautical engineering.

It’s certainly possible to produce a street-legal vehicle that’s capable of flight — both the PAL-V and Terrafugia are both working prototypes. But they’re a far cry from the Zemeckisian dream of shuttling your children through the skies to soccer practice. And what happens when your uncle has a few too many at Christmas dinner and takes off in his flying car? And what about rush hour? No one wants to end up stuck in traffic at a few thousand feet on limited fuel. Without the navigation systems that Boeing described in their initial feasibility study, these vehicles will never be cleared for anyone to use with just a few hours of driver’s ed and a road test — if you want to fly one of them today, you’ll need a pilot’s license.

And let’s be honest, since we’re all good friends here: we can all count on one hand the number of people we trust behind the wheel enough to get into a flying car with them.

Still, while one might think the FAA would have a few bones to pick with the idea of flying cars, the administration has been remarkably friendly to the nascent industry, classifying the Terrafugia Transition as a “light sports plane”, even though it was 120 pounds too heavy to quality. This distinction is crucial to the technology’s adoption, as it requires only 20 hours of flight time (5 of it solo) instead of double that, in addition to night training and medical certification.

If you don’t have one and yet still dream of flying your own personal aircraft, you might consider the safer (if a bit controversial) option of commercial drones.

Why the Wi-Fi is terrible in packed conferences

Anyone who’s been around the tech conference circuit will tell you the same thing: Wi-Fi sucks at CES, WWDC, SXSW, and anywhere else nerds congregate to nerd out about nerdy things. It’s not just because hotels are too cheap to install decent hardware for the occasional influx of conference-goers. The bottleneck is with the Federal Communications Commission, the same agency that comes knocking when civically-minded radio enthusiasts overstep their bounds.

The problem is that there just aren’t enough frequencies within the low-intensity microwave ranges which the FCC has allotted for Wi-Fi. This means that when 5,000 people are packed into a single room (for example, to see a man demo a new consumer electronic device), things tend to slow down a bit.

The problem has not gone unnoticed: as early as 2006, Intel released a set of guidelines for conference organizers wishing to get the most bang for their spectrum. The guide recommends, among other things, that organizers pay careful attention to the configuration of access points and Wi-Fi channel assignments, and keep a sharp lookout for users who set up their own ad-hoc wireless access points.

The spectrum battles are not limited to Wi-Fi, however; high-speed mobile Internet is also affected by the spectrum shortage. As part of the economic stimulus package of 2009, the Obama administration earmarked $7.2B for a National Broadband Plan which aimed to add 300 MHz of additional wireless spectrum to by 2015. Unfortunately, the plan has been a dismal failure, and some are already calling for a new plan.

Private companies seeking to improve the situation face significant regulatory hurdles. Consider the grisly fate of LightSquared. The startup had dreams of building a nationwide LTE network which could be sold wholesale to smaller regional operators, bringing mobile broadband to under-served markets. It hoped to run the network on an unused block of frequencies next to those used for GPS, which it purchased before receiving final approval from the FCC. That spectrum became essentially worthless when the agency declared it unsafe for broadband use due to possible interference with GPS signals, and the company filed for bankruptcy protection earlier this year.

Soon, Wi-Fi networks (and the operators’ strained cellular networks) could improve noticeably in areas with low population density thanks to an impending auction of unlicensed “white space” airwaves left over from analog television. These frequencies below 700 megahertz are highly prized by communications companies for their long range and ability to travel through miles of air, trees, and other physical obstructions. The recycled spectrum will allow rural users to share a single wi-fi hotspot over large distances. Unfortunately, “Super Wi-Fi”, as it’s come to be known, will do little to improve municipal Wi-Fi in crowded urban markets.

It’s easy to explain away the slow adoption of groundbreaking technologies by pointing to government regulations, antiquated legislation, and technically conservative and out-of-touch government agencies.

But while this line of reasoning might be a libertarian’s wet dream, it ignores the complex interactions between businesses, the government, and (most important) consumers. Do we really want flying cars, or do we just say we want them because they sound cool and were a powerful symbol of the future we now find ourselves approaching? Are we willing to pay more money for better GPS tracking and Wi-Fi, even indirectly through government subsidies?