Question-and-answer site Quora has historically skewed toward techie early adopters, making it an excellent source of Silicon Valley gossip since 2010. But the company introduced two major changes today — simplified topic pages and trending topics — as part of a general push to highlight the range of expertise on the site and introduce Quora as a rival to Wikipedia for the best single source of human knowledge on the internet.

The content on Quora has gradually diversified over more than 250,000 topics ranging from "eggs" to "food groups" to "2012 U.S. Presidential Election." The site is also full of one-off gems, such as this convicted murderer opining on prison design and these tricks for mailing large amounts of cash. Quora has even attracted some well-known figures including Republican vice presidential candidate Paul Ryan, director JJ Abrams, and producer Tim Gibbons. However, it has yet to achieve the same level of quality and participation across topics outside of tech.

Quora's redesigned topic pages now look more like Wikipedia articles. Topic pages were previously cluttered with top answerers, related boards, most recent questions, ways to edit the page, and more. These cluttered pages were typical of Quora's design, which a Wall Street Journal review described as "uninviting, geeky and poorly explained." Quora has now buried all the extra functionality; topic pages now consist of a brief description and a feed of interesting answers. The idea is "to help make it more fun for users and easier to look for content when they're in the mood to focus on a certain topic," said Marc Bodnick, who handles product and operations for Quora. 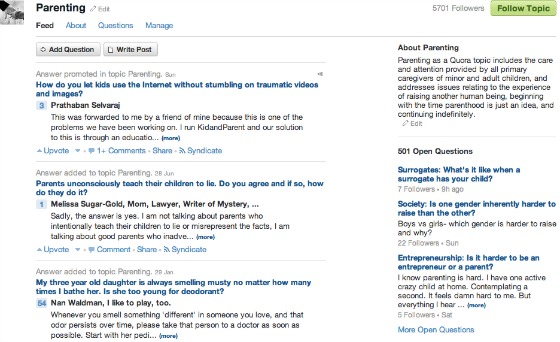 Additionally, the Quora homepage will display the five "most exciting" topics as determined by a recent surge in activity. The topics will be the same for all users for now, although Quora may personalize them in the future. "A lot of content on Quora is interesting to people even if they don't think to themselves, 'oh, I didn't know I was interested in Japan,'" Bodnick said. "Trending Topics really inflame people's curiosity."

Bodnick says Quora is no longer techie-centric, pointing out that a popular answer is more likely to be about movies than about startups. Tech and business now account for just 24 percent of the total answers. Yet a list of top Quora users shows that the internet industry is still overrepresented, with Silicon Valley entrepreneurs answering questions in every category.

Quora has had a string of product announcements this month. A feature called "Views" that broadcast what posts users were reading was a spectacular flop; the release of an Android app and integration into Bing's "social sidebar" got better reception.

As Wikipedia struggles with its own diversity issues, there could be space for Quora to gain traction. But making the site less geeky is just one of Quora's challenges. The site is also attracting questions like "What is the cutest thing you've ever seen a dog do?" and "What makes bacon and eggs so awesome?" that don't exactly fit the mission of crowdsourcing wisdom. The umbrella topic "bacon" is described as "cured meat prepared from a pig's belly mussles and fat" [sic]. There are 11 questions about bacon with zero answers. In the navel-gazing topic "Quora" there are no fewer than 1,989 unanswered questions.

Making the site less geeky is just one of Quora's challenges

By contrast, competitor Stack Exchange has robust question-and-answer sites around cooking, philosophy, travel, and movies and television. Ninety-three percent of questions have at least one answer. Stack Exchange's participation rate is high because each topic-based site is first proposed by users on a testing site called Area 51. If a new topic gets enough traction on Area 51, Stack Exchange will launch a site for it.

Bodnick declined to release any numbers, but he said Quora has been growing steadily since launch and is "hitting new traffic and usage numbers every couple of weeks." Outside estimates put Quora's traffic as high as 2.8 million visits per day, and 280,000 people log in monthly via Facebook.

If you want to know why Marissa Mayer left Google or what it's really like to work at Square, or whether Adult FriendFinder is really going around the Valley begging VCs to invest in them, it's widely known that Quora is your best bet. It just so happens that Quora is also collecting brilliant answers on topics as obtuse as astronomy. The problem is making sure people can find them.