There's no LTE iPhone on the UK horizon just yet, but Everything Everywhere is proceeding with its planned rollout of the nation's first 4G network.

There's no LTE iPhone on the UK horizon just yet, but Everything Everywhere is proceeding with its planned rollout of the nation's first 4G network. Starting today, the company will rebrand itself, its network, and its consumer service to simply EE. It will combine Orange and T-Mobile's networks in the UK, however those older brands will persist and "stand alongside" EE in the future.

In simple terms, if you want 4G, you'll go with EE. Olaf Swantee, EE's CEO, introduced the new brand as "a simple, visible signal to our customers," replacing the clunkier Everything Everywhere label. EE will offer both 4G mobile connectivity and broadband fiber connections for home and business customers.

Seven launch devices for EE's 4G service will be available "in the coming weeks." Samsung's Galaxy S III and HTC's One XL headline the list, though EE has also claimed a limited-term exclusive on Nokia's upcoming Lumia 920. The Lumia 820 will also be available for more budget-conscious customers, while Huawei will provide the Ascend P1, a USB dongle, and a wireless hotspot compatible with the new network. "And one more thing, we'll be announcing more devices shortly," said Olaf, potentially in a subtle hint toward the next iPhone.

"And one more thing, we'll be announcing more devices shortly."

London, Birmingham, Cardiff, and Bristol will be the first four cities to turn on 4G, starting today in testing mode. By Christmas, promises Olaf, they'll be joined by Edinburgh, Belfast, Leeds, Sheffield, Manchester, Liverpool, Newcastle, Nottingham, Derby, Hull, and Southampton — all of them offering LTE service to consumers by the end of the year. 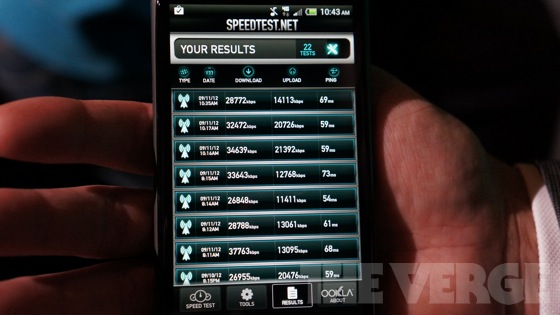 Late To Everything: the story of LTE in the UK