This is Paul Miller's next phone.

Share All sharing options for: This is my next: Huawei U2800A

This is my next is a special feature where writers of The Verge sound off on their latest deep, dark desires from the world of technology.

Before I left the internet, I optimistically drafted a "This is my next" post about my new Nokia phone. I'd ordered a decade-old Nokia 3310 on eBay, and expected to hop over to that handset as soon as it came in the mail. I sold my iPhone in anticipation, and in the meantime I was using a dirt-cheap, Huawei-built AT&T Go Phone which I described in my piece as "offensive" and "tragic."

My forthcoming Nokia, I knew, would be a hit at parties. Everybody would coo over the familiar form factor, describe how much abuse they heaped on theirs "back in the day," and attempt to get that old Snake mojo back. Inevitably, as this theoretical phone was passed around, girls would add themselves to my contact list, and I'd call one of them, and we'd fall in love and start a family. That Nokia 3310, purchased from eBay user "r-phone," was my ticket to a brighter future.

That Nokia 3310 was my ticket to a brighter future

I ended up buying three different 3300-derivative Nokias online, and was given a fourth — none of them worked. All of the phones "worked," of course. I could turn them on and play a wistful game of Snake, but the signal bars were stuck at zero. That 3310 from Mr. R-phone was designed for UK bands, the AT&T variants I purchased didn't have SIM slots, and the T-Mobile one I got would require me to switch networks before my two-year contract was up.

As the Time of Unplugging neared, I turned to increasingly drastic and irrational measures to rid myself of the hated Huawei. I worked feverishly to get my old European MOTOFONE unlocked, only to find out it was on the wrong bands. I dug up my busted RAZR V3, but decided that using a phone with a blanked-out screen was too much of a challenge. Finally, I bought a couple StarTACS (and spare batteries, and chargers, and power adapters) at a flea market, as if they were retro-amulets that would restore my other useless devices. They didn't.

But mostly I would just drop the Huawei on the ground and see what happened. Nothing at all, ever.

I give Huawei zero credit for the phone's resiliency. Unlike the strong, high-grade plastics used in the Nokia 3310, the Huawei feels like dollar store plastic. And that's its secret. The phone is unbreakable in the same way a bought-in-bulk kazoo is unbreakable. It's useless, cheap, and too lightweight to do any damage to itself in a fall.

The phone probably falls to the ground once a week, which usually causes the loose battery cover to pop off, but no noticeable scratches. Once a month, though, I'll drop the phone out of my pocket while riding my bike. The phone will crumble into its three parts — battery, battery cover, horrible phone — but other than a couple scuffs, no lasting damage will be imparted. One time it got ran over by a cab, and yet still it rings on. It's astonishing for a device with a screen membrane thinner than some peel-and-stick scuff protectors. 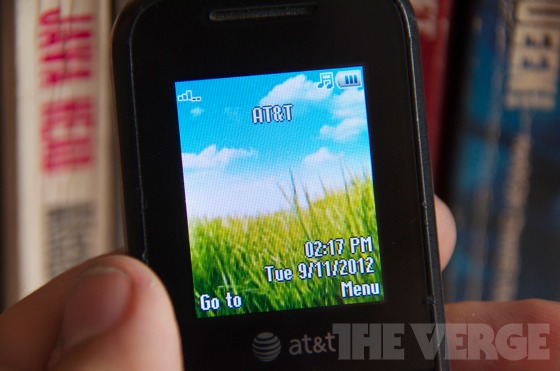 Without a handy vat of acid to submerge this phone, I seem to be stuck with it. And so, despairing for my Nokia, and true love, I've learned to love the one I'm with. The Huawei gets amazing battery life — I can go three days without a charge. The UI is dead simple — I can set an alarm, return a phone call, and add somebody to my address book much faster than I can do any of those things on an iPhone. Unlike most phones these days, the Huawei doesn't get very warm during phone calls, and it's also half as heavy as a smartphone.

I love most of all how tactile the device is. There are 20-something spongy, absurdly cheap buttons to press on the face of the phone. On the five key there are those little raised bumps that help you center your thumb before dialing. The non-scrolling ring around the center button has delicate, vinyl-like grooves in it that I like to follow with my fingertip, or scratch with a nail. I pop the battery cover on and off when I'm bored. If I were to become a "power user," there are numeric shortcuts to almost every function on the phone, and if I texted I could do blind T9 texting. I could also probably throw it very, very far.

It's still a terrible phone, and I hate it. It's as aesthetically offensive as an early '00s college football logo. "Sound quality" would be too generous a metric for the earpiece's bleating. I butt dial people all the time, because it's hard to keep the phone locked. Sometimes the speakerphone gets turned on accidentally, and the phone blares corrosive, tinny noises into my ear. There's no camera, the voice recorder is terrible, and the calendar is flawed beyond usability. I have no way to backup my contacts to my computer, and so now I live in fear of losing the phone and therefore losing all my new post-internet friends.

"This is my next" is a chance to stand up and challenge your own status quo. It's believing the grass is indeed greener on the other side, and actually making the jump. For me, this AT&T Go Phone challenges a status quo of consumption.

For me, this AT&T Go Phone challenges a status quo of consumption

I'm typing this article on an iPad 3 with multiple orders of magnitude more pixels, processing power, and sex appeal than the Huawei, which is sitting nearby on the desk, looking stupid and worthless. The iPad 3 is a gadget I bought because I wanted something newer and shinier, not because of "need." It serves as a painful (but beautiful, wonderful, glorious) reminder that I can be a spineless consumer, in thrall to Apple's machinery of incremental innovation and glossy marketing.

When the new iPhone comes out, a few weeks from now, it will be the first time in 5 years that my decision on buy-or-not-to-buy won't be a gut-wrenching one. I won't have to review my budget, or consider the pros-and-cons up against encroaching Android competitors, or ask myself "what will the neighbors think?" I just won't buy it because I don't need it.

Or maybe I'll stick my Huawei into a Blendtec, sprint to the nearest Apple Store, and stop kidding myself with this whole spirit quest thing.