Sony bets big on small full-frame cameras with the RX1, A99, and VG900

Sony bets big on small full-frame cameras with the RX1, A99, and VG900

In the digital camera world, Sony's still a relatively small name next to Canon or Nikon. But the company's hell-bent on changing that, and its primary tactic has been simple: shove gigantic sensors into tiny cameras. The RX100 and the NEX lineup are great examples of that, but the company's gone a giant leap further today. It's released three new full-frame cameras, including the Cyber-shot RX1, which might just be the smallest full-frame camera we've ever seen. The RX1 launches alongside the Alpha A99 DSLR and the NEX-VG900 camcorder — all three have gigantic sensors, and together essentially redefine Sony's top-tier offerings.

The Cyber-shot RX1 is the real technical achievement of the bunch. It's always been simply assumed that full-frame cameras had to be big, in order to handle the large sensor. Full-frame DSLRs are typically large, heavy, and more suited to a tripod than to mobile shooting, but apparently that doesn't have to be the case. The 24.3-megapixel RX1 measures only 4.5 inches by 3 inches, and weighs just over a pound. It's closer in size to Sony's NEX cameras than to just about any DSLR, despite internals that promise far better image quality. Its native ISO range goes up to ISO 25,600, and can shoot 1080p video at 24 frames per second. 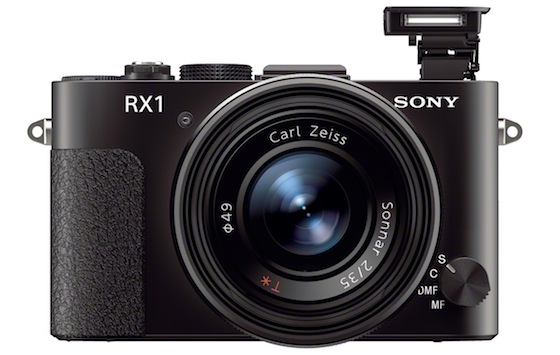 It's hard to believe the RX1 could possibly be full-frame

The biggest drawback with the RX1 is that it doesn't support interchangeable lenses; that's surely a space-saving move, but it means you're stuck with the included 35mm f/2.0 lens. There's also not a lot of manual control available — there are rings on the lens for changing focus and aperture, plus a mode dial on top and a few buttons on the back. The RX1 is really a pro version of the RX100 point-and-shoot, and like the RX100, it's far more expensive than just about anything its size: it'll cost about $2,800 when it's available in November. At that price it feels a bit like a proof of concept, Sony simply showing off its engineering prowess — but it works, and it gives Sony something no other manufacturer can possibly compete with. 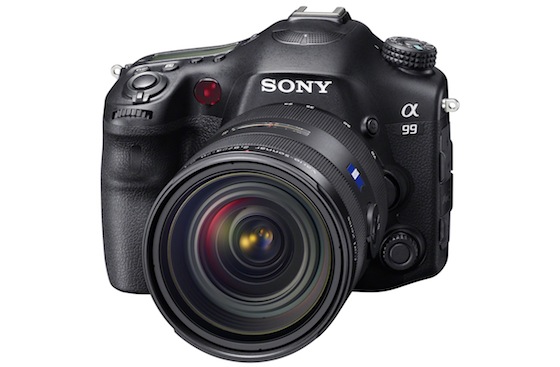 The Alpha A99 is Sony's new flagship camera, replacing the three-year-old A900 in the company's lineup. It's a camera four years in the making, and it's a significant update over its predecessor. Inside "the lightest full-frame SLR in the world" are a 24.3-megapixel full-frame sensor, Sony's latest Bionz processor, and a hybrid autofocus system much like the NEX-5R and Canon's T4i. It's an SLT camera rather than an SLR, which means the mirror doesn't need to flip up for a picture to be taken — it's translucent, so light goes through it. It also means there's not enough light for an optical viewfinder, so Sony's using the same OLED EVF as on the NEX-7. The missing OVF could be a problem for some users, but the NEX-7's is very good as EVFs go, and Sony says a full-frame sensor makes it even better.

It's Sony's answer to the 5D Mark III

Sony's also throwing the A99 into the race between Nikon and Canon to build the most video-friendly DSLR. The dual autofocus is available while recording video, and you can shoot 1080p video at 60 frames per second — Sony says it's the first full-frame camera to do so. There's also a headphone jack, an XLR adapter, in-camera audio leveling, and plenty of other video features. At $2,799 body-only it's right in line with similar products from Canon or Nikon. 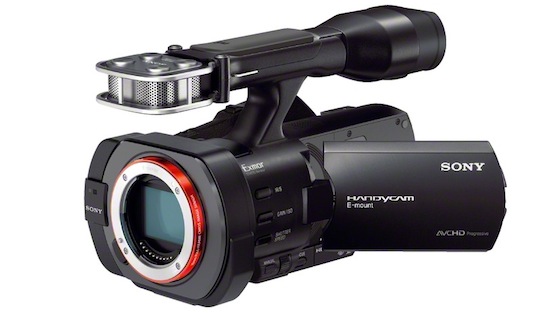 Of course, if video is what you're after, the NEX-VG900 is the truly drool-worthy new addition to Sony's lineup. Rather than take a DSLR and add video capabilities, the VG900 is primarily a camcorder onto which Sony has added DSLR functionality. Like the A99, it has a full-frame, 24.3-megapixel sensor, an E-mount (which works with Sony's NEX lenses, or its A-mount lenses via an adapter), and every pro-level video feature you could want, from uncompressed HDMI out to much-improved audio recording. It'll be out in November, for $3,299.99 body-only. (If that's a little steep, Sony also introduced two new models with APS-C sensors and far lower prices.)

Without the brand power of a name like Canon or Nikon, Sony's had to make some pretty bold moves to make a splash in the market. Whether or not any of the cameras Sony announced today will sway buyers away from the DSLR stalwarts remains to be seen, but Sony continues to push the market forward in a way none of its competitors can equal.