Sony has announced the latest in its NEX line of mirrorless cameras, the NEX-6. As previously leaked, the NEX-6 has a large 16-megapixel APS-C sensor inside a body similar to that of the company's flagship NEX-7. The layout has been tweaked a bit, with a traditional DSLR-style PASM dial sitting on top of a mode-specific control wheel, but otherwise the buttons, OLED electronic viewfinder, and rear dial are laid out in the same way.

Like the recently-announced NEX-5R, the NEX-6 features Wi-Fi support, both for transferring photos to mobile devices and for using apps and uploading to Facebook directly from the camera itself. The NEX-6 also uses the 5R's new hybrid autofocus system which combines both phase and contrast detection methods for faster, more accurate subject lock-on. At around $850 for the body and $1,000 with a 16-50mm f/3.5-5.6 kit lens, the 6 will slot right in between the 5R and 7 in Sony's NEX lineup when released this November. 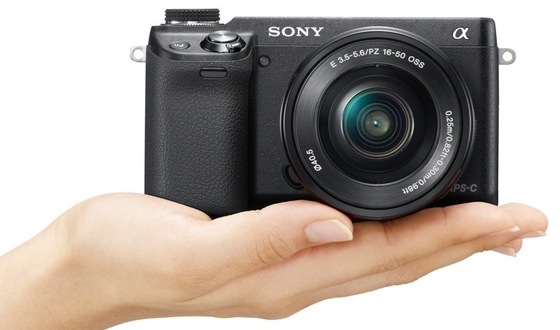 It's definitely taken time for Sony to build up a decent library of NEX-compatible lenses, but it's getting there, and the announcement of three new options today brings the total to 13 (including two converters). The aforementioned 16-50mm kit lens is actually a pancake power zoom measuring only 29.9mm thick, allowing for a much more pocketable package than provided by most NEX lenses to date. Available separately for $350 in January, it features a dual-function control ring that lets you either focus manually or use a standard twist-to-zoom action when in autofocus mode.

Also announced is a $450 35mm f/1.8 prime lens which should give a versatile option for blurred backgrounds and fast performance in low light, along with an $850 10-18mm f/4 wide-angle zoom lens for more extreme perspectives. Both of these will be available in November alongside the NEX-6.