The famous design of the London Underground map was first conceived in the 1930s by engineering draftsman Harry Beck, who based his idea around the clarity and simplicity of electrical schematics — now, Japanese designer Yuri Suzuki has taken the concept full circle, creating a functioning radio using the Tube map as a circuit board. Currently on display at London's Design Museum, the printed circuit board (PCB) covers the full length and breadth of the city's present-day transport network, using strategically placed resistors, capacitors and other electrical components to harness the interconnections in the system.

"I think the PCB is a remarkable invention," says Suzuki in an explanatory video. "Due to the process and efficiency of the electronics, you can see a really complex maze." His radio makes use of all 11 of the London Underground's lines, as well as the Overground and the Docklands Light Railway (DLR) — it even incorporates the Emirates Air Line, the new cable car system that runs 295 feet above the Thames in East London. 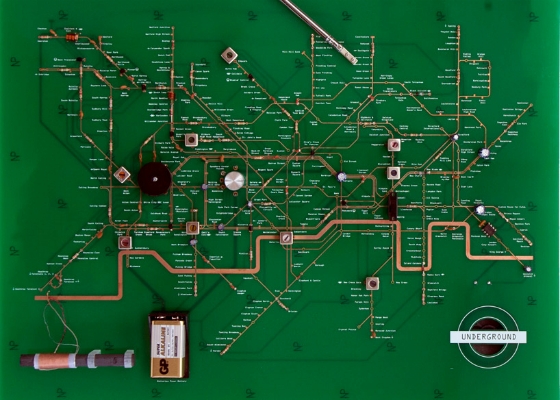