The Apple A6: a smaller processor for the iPhone 5 with twice the performance

Apple's new iPhone 5 has some fresh muscle inside: The Apple A6.

Share All sharing options for: The Apple A6: a smaller processor for the iPhone 5 with twice the performance

Apple's new iPhone 5 has some fresh muscle inside: The Apple A6. The new system-on-chip is 22 percent smaller than the A5, and Apple says it has twice the CPU power and twice the graphical power inside.

Mind you, that's apples-to-apples comparison with the iPhone 4S, and not necessarily the third-generation iPad's A5X. The latter chip had a dual-core CPU with quad-core graphics, and we were expecting either a shrunken A5X or a new quad-core CPU for Apple's new phone. With twice the performance across the board, it could be quad-core with quad-core graphics, or it could simply have a new design, like ARM's Cortex-A15 architecture. Apple's not really talking specs, but we did learn a few things.

Apple says it's a good bit speedier at general tasks: 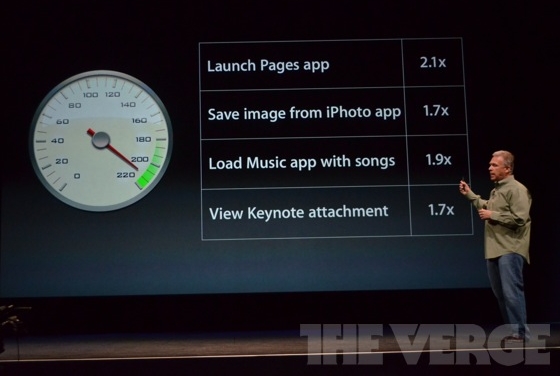 For another thing, battery life appears to be improved, possibly due to the A6 chip. Apple claims the iPhone 5 can browse the web at LTE speeds for eight hours, video for ten, and achieve 225 hours of standby.

Camera potency is another focus here: Phil Schiller says the A6 has a next-gen signal processor that allows the iPhone 5 to capture images 40 percent faster, and has better low-light performance with spatial noise reduction. Video stabilization has also been improved, and you can take photos while recording video, both tasks that can use the new horsepower.

One thing that doesn't appear to be present is integrated LTE, like Qualcomm's popular Snapdragon S4 MSM8960 chip. There's a separate radio for both LTE data and voice here, which is rumored to be Qualcomm's MDM9615.

It certainly doesn't sound like we're getting a quad-core processor here, but often Apple is rumored to introduce new technology entire product generations before it actually happens. The iPad 2 was reported to have an incredibly high-resolution screen, which made it into the third-generation iPad instead. Allegedly, Apple had a quad-core processor ready for the iPad 3, but the S5L8945X turned out to be the A5X and sported a quad-core graphics engine rather than a quad-core processor for general purpose computing. Still, we've been wondering what the other leaked S5L8950X chip might be, and perhaps we'll find it inside one of the devices introduced today.

Apple's iPhone 5 announcement: everything you need to know