With the iPhone 5, Apple has finally tackled key areas where its Android competition previously held an advantage: a larger display, high-speed 4G LTE networking, and an improved camera are all inside the new flagship iOS device. But how does the iPhone 5 rate against the latest handsets running Android and Windows Phone? We've compared them all here.

With the iPhone 5, Apple has finally tackled key areas where its Android competition previously held an advantage: a larger display, high-speed 4G LTE networking, and an improved camera are all inside the new flagship iOS device. The company has also pushed forward its reputation for stellar build quality with a unibody aluminum shell that should scale back the number of Genius Bar visits for shattered rear casings — a particular problem for the fragile iPhone 4 / 4S. But how does the iPhone 5 rate against the latest handsets running Android and Windows Phone? With this launch, Apple is facing stiffer competition than ever before.

A larger display still dwarfed by the competition

The most obvious upgrade from prior iPhone models is that new display. The 4-inch Retina panel is an appreciable upgrade over Apple's old hardware, but doesn't measure up to the monstrous screens found on some competing devices. Whether that's a good or bad thing will vary between users; if you're looking for maximum screen real estate, you may still gravitate toward a Galaxy S III, Galaxy Nexus, HTC One X, or the upcoming Lumia 920. In terms of other physical traits, Apple describes the iPhone 5 has its thinnest and lightest phone ever. That's true, and it also bests competitors in this regard. Apple wins the dimensions game. 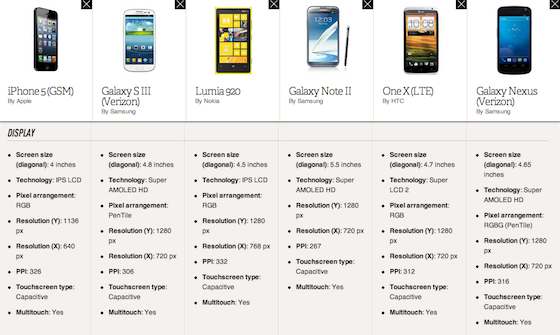 Strong camera performance has been a priority for Apple in iPhones past and that trend continues here. Behind the hardened sapphire crystal lens is an 8-megapixel backside-illuminated sensor offering f/2.4 aperture. Apple says this all leads to faster shooting and better low light photography. Can it compare to the impressive PureView camera within Nokia's latest Lumia line? Or the stellar optics offered by the Galaxy S III? We won't be able to determine that until we can put them head to head. Suffice it to say, like the 4S before it, the iPhone 5 can easily fill the role of a traditional point and shoot.

Powering the iPhone 5 is Apple's A6 chip, which the company claims offers twice the graphics performance over its predecessor. What was once a strong suit for Apple's hardware isn't such a clear advantage anymore, however. Android devices have been rapidly catching up with Apple's silicon in recent months, owing primarily to powerful chips from Nvidia and Qualcomm. Even so, if gaming is among your primary concerns when choosing a smartphone, the depth of titles inside Apple's App Store could be the deciding factor.

And finally, there's the important issue of cost, which sees Apple holding steady with its traditional pricing structure. The 16GB iPhone 5 will run you $199 on-contract, putting it at parity with the price tag you'll find on the latest handsets from Samsung, Motorola, HTC, and Nokia. We've reached a point where your operating system preference will likely rank higher than price when picking between the latest crop of top-tier phones. Which will it be?

William Savona contributed to this article.

More from this stream The new iPhone 5: everything you need to know