It happens every year. Apple announces a new iPhone and iOS, and developers have about a week to update their apps to work on the new hardware and software. Most years, the process isn't too difficult, but some years, Apple updates the iPhone's display and developers need to put in extra legwork to prevent their apps from looking like crap. Last year it was adapting to the retina screen and this year its adapting to the larger screen. No one wants their app enveloped by ugly black letterboxes. Fortunately, developers say that updating apps for the iPhone 5's 4-inch screen won't be as tough as you might expect. But is taller better?

Share All sharing options for: For app developers, iPhone 5's bigger screen is a mixed blessing

It happens every year. Apple announces a new iPhone and iOS, and developers have about a week to update their apps to work on the new hardware and software. Most years, the process isn't too difficult — but some years, Apple updates the iPhone's display and developers need to put in extra legwork to prevent their apps from looking pixelated. In 2010 it was adapting to the retina display, and this year it's adapting to the iPhone 5's taller screen. No one wants their app enveloped by ugly black letterboxes, which will be especially obvious when displayed on a white iPhone 5. Fortunately, developers say that updating apps for the iPhone 5's 4-inch screen won't be as tough as you might expect. But is taller better?

"Apps have always had to support flexible heights."

"Apps have always had to support flexible heights because of the 'In-Call' indicator" that pops down while you're on a phone call, one prominent iOS developer told The Verge. "If the developer was hygienic and didn't sprinkle in too many hard-coded values, the implementation [of a taller app] should be pretty straightforward," he added. Even with more screen real estate to work with, many developers will likely follow Apple's lead and simply make apps "taller," like the Mail, Safari, and Messages apps the company demoed at its keynote. "I bet some people will add an extra set of buttons [in the navigation bar] as a gimmick, but I don't see most people doing it. It fragments the UI's you'd have to support," he says. "For the apps that do it the 'right' way and use standard UI elements, it should be stupid easy," Dark Sky developer Adam Grossman concurs. "It's probably about a day of work for us and then testing, but that's what this weekend is for," Lickability co-founder Matthew Bischoff says. 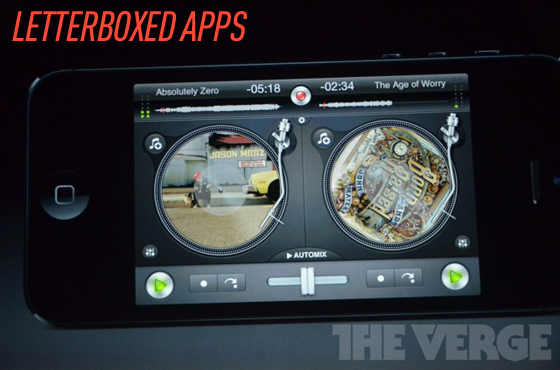 Even if updating most apps is relatively simple, not all app developers are hot on the idea of a taller screen. "For many people, getting to the top of the navigation bar is no longer going to be doable one handed," App Cubby founder David Barnard says. The "Back" button in many apps is at the top left of the screen, which is now the furthest point from a right-handed user's thumb. Also, a larger screen means some landscape-oriented apps will have to be redesigned entirely. Some people aren't even convinced that the large screen is even practical for one-handed use to begin with, despite Apple's claims. "New designs have emerged which focus less on buttons at the top of your screen... You can swipe horizontally to access the side navigation in the new Facebook app," Barnard says. "I think we might start seeing some interesting changes in how apps are laid out." More importantly, Barnard is worried about supporting and selling apps to users of last year's iPhone. "Apple will still be selling the old devices by the millions," he says. "We can't just abandon the old resolution, so building great apps for both is going to be tough."

Apps like OpenTable, Djay, and CNN were featured in Apple's iPhone 5 announcement and got a head start in preparing for a larger screen. "I wish we could have had a little more notice," Tapity founder and award-winning app developer Jeremy Olson says, who's currently on vacation and might not have the time to update his apps before the iPhone 5 launches. With each iPhone or iPad release, impatient app users inevitably become upset with developers for not updating their apps quickly enough. "I guess we had the rumors," to prepare with he says. 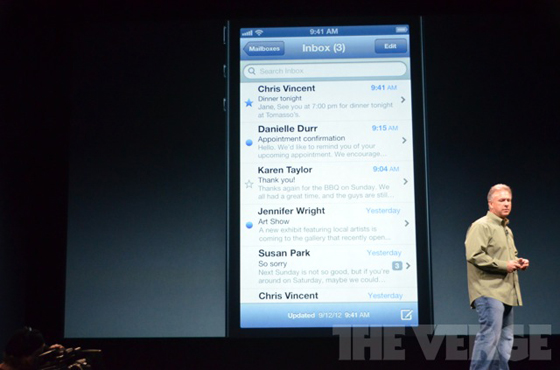 Day One developer Ben Dolman wanted to avoid any possible surprises and tested his app using a hacked iOS simulator that made the iPhone on his computer screen appear taller. "The only thing we had to change was our home screen, and that only took us a few minutes," Dollman says. However, he isn't as confident that apps down the line will simply scale their midsections vertically. "New apps will definitely take advantage of the additional space, and some existing apps (games in particular) will introduce new layouts," he says.

A bigger screen might mean more pixels to serve ads on

For some developers, a bigger screen simply means more pixels to serve ads on. "I can see some developers using this opportunity for bigger ads or more chrome," Bischoff says, "but the smart ones will just show more content. That's what users care about." Impending co-founder Phill Ryu says," Seeing more content without having to scroll is great, but I just hope most developers don't treat the extra pixels as more space for ads." Ads on iOS have traditionally been served as banners at the bottom of many applications, and the iPhone 5's new screen real estate provides a pretty simple place to slot one in.

Developers can update their apps and prepare for the imminent launch of the iPhone 5, but ultimately, using the actual device could be the biggest factor in deciding how best to cater apps to a larger screen. "I can look at pictures and make some assumptions," Barnard says, "but until I have it in my hands, I don't think I'll fully understand how the changes will impact the UI." Fortunately, adding some "belly room" to apps doesn't pose much of a problem for current developers. Supporting fragmentation among screen sizes for older iPhones and coming up with innovative new navigation ideas could make this iPhone launch the most challenging one yet for developers.

The new iPhone 5: everything you need to know