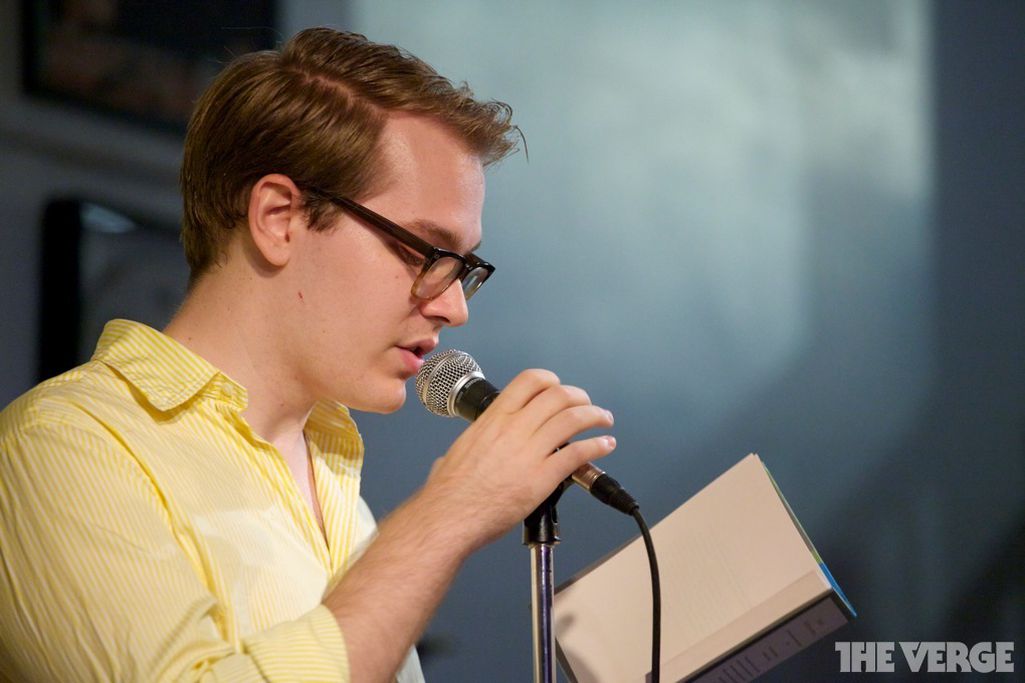 What is privacy? What is identity? What is anonymity? These are questions in the background of Cole Stryker’s new book, Hacking the Future: Privacy, Identity, and Anonymity on the Web. You’d think with all three in the title they’d be at the forefront, but Stryker largely leaves the philosophical questions unasked and unexamined. His concerns are in the real world — be it the physical or digital one — and his definitions of the above are thusly what you’d expect. As a so-called “digital native,” Stryker is willing to take a stab at explaining why anonymity is so worthy of protection, but his perspective also thankfully belies his belief that it is and should remain a given on the internet — even as our outward concerns about privacy erode and we grow ever more comfortable living in the age of “over-sharing.” 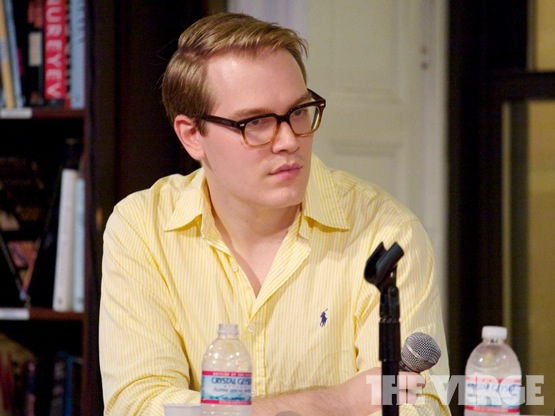 Hacking the Future starts with a somewhat bold premise — that in the continuing "warfare" on the Web, the next "primary battleground" will be the identity space. His argument is based around the co-mingling of his ideas of privacy, identity and anonymity into one hyper-politicized "yes" or no "question." While other people thinking about the future of the internet would argue that something like net neutrality rates higher than privacy on the web, Stryker told me that while net neutrality is "trendier at the moment," he thinks identity will be a more consistently important topic as "data mining companies increasingly scrape our personal data," and "governments are caught illegally surveilling.

"Every publicized hack, leak, and privacy intrusion," he says, will contribute to a growing public concern. Net neutrality, he told me, deals with access to the internet, but identity deals with "the nature of how the internet itself works." In his opinion, the latter trumps the former. Another privacy advocate, Andrew Keen — whose recent Digital Vertigo covered some similar concerns, albeit with a more philosophical bent — told me that he agrees that identity is the primary focus of conflict on the internet. The future, he says, will be "characterized by reputation wars" where we will be increasingly "defined by our digital reputations." This comes up in Hacking the Future, too, where anonymity doesn’t always mean invisibility. Stryker details one famous pseudonymous blogger — Coke Talk — who has two completely separate "reputations" she manages. One, in her actual life and day job in fashion where she goes by her (unknown) real name, and another under her (kind of horrible) pseudonym. Reputation, it seems, is not something we can easily escape, even when we aren’t using our real names. So, if we accept the premise that identity — and the right to deal with communities on the internet anonymously — is a war worth waging, where are the threats?

Stryker rightly argues that media coverage of high-profile hacktivist groups like Anonymous, and transparency-at-all costs, fight-oppressive-regime extremists like Wikileaks have struck sometimes unnecessary fear, uncertainty and doubt into the masses. This, he argues, leads many people to believe that maybe we’d be better off if we had to operate under our one, "real identity." Mark Zuckerberg’s famous quote that you only "have one identity," and if you feel the need for more than one you are somehow "inauthentic," echoes the opinion of his sister, Randi, who is quoted by Stryker back in 2011 when she was the marketing director of Facebook. To the magazine Marie Claire, Randi Zuckerberg argued that "anonymity on the internet has to go away. People behave a lot better when they have their real names down." It seems then, that not only are citizens in fear of hackers stealing their identities, but that leaders of huge, respected companies such as Facebook are also joining in the fight to stamp out the damaging threat of anonymity. And, in reality, many moves have in fact been made away from anonymity. Blog comments, long-known as the bane of internet writers, have been in some places replaced with Facebook comments, where no one can comment anonymously. This works effectively by forcing the user to ask him or herself, "do I want everyone to know that this is a comment I made?" Of course, the stakes aren’t often that high — if you’re commenting on a post about a new iPhone, your Facebook-ified comments might now be more civil (hurray!), but there wasn’t much to lose if you didn’t make the comment at all. Where the issue is more limiting, however, is if the words you want to speak are in fact of any importance, or of a controversial nature. But Facebook commenting hasn’t become ubiquitous, and anonymity on the internet has thus far, remained largely intact.

Stryker admits that many concerns about privacy on the internet often do speak to our fears about "dark, worst-case scenario hypotheticals," but that that doesn’t make preparing for those hypotheticals any less of a concern. The government, he says, has largely backed away from major initiatives which would threaten how the internet functions. SOPA and PIPA, two proposed legislations widely believed to threaten free speech, failed to pass, and Secretary of State Hillary Clinton — as quoted by Stryker — has taken an "if it ain’t broke, don’t fix it" attitude about federal policing of the open internet. In Stryker’s book, the main threats to privacy and anonymity on the web (once you move on from hackers, identity thieves, and general mischief makers) are unsurprisingly private companies, such as Facebook. Facebook and Google are very, very often the targets of media privacy concerns, and for good reason: they are mining, collecting, and drawing conclusions about our "data," which increasingly stands in for who we are as people. Much of this information is used to sell ads against, of course. Stryker doesn’t speak nearly as much to services such as Twitter, of course, because Twitter never had a "real name" requirement, but that doesn’t mean that reputation plays no role in its functionality. In fact, "verified users" are the elite, authenticated and authentic minority which comprises much of Twitter for many, many users.

The hacker mindset, ultimately, is the one which Stryker sides with; the one which weeds out its own troublemakers (or helps the authorities find the worst offenders, like child phornographers), and respects the important borders that anonymity provides to citizens of the internet. Stryker told me that the internet, he believes, will "continue to be a place for people to speak truth to power," and his book is strongest when he argues that anonymity is something which should be embraced, regardless of the mostly low-impact tradeoffs. Andrew Keen, though also a believer in anonymity on the web, takes a somewhat dimmer view of the hacker ethic, which he describes himself as "hostile to" (if you’re familiar with his work, you already likely know that he’s hostile to plenty of things). Hackers, he says, are "part of the new elite," and their ethos will inevitably "become a kind of orthodoxy," because in his view, in the future, no one but the wealthy and powerful will be able to afford anonymity, and besides the great cost, it will require a sense of "entitlement and virtue" — two traits which many hackers can probably be said to already possess. But their sense of entitlement and virtue isn’t necessarily without merit: they are the in many ways the direct descendants of those who built the internet. 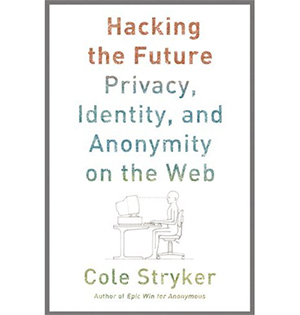 Hacking the Future: Privacy, Identity, and Anonymity on the Web
By Cole Stryker
$25.95 Overlook Duckworth

Stryker ultimately differs from many advocates of privacy and anonymity on the internet because he doesn’t favor government regulation to protect citizens, saying that using Facebook, for instance, is a choice, and that companies like it "only have as much power to monitor as we give them." Instead, he advocates for education, and I suspect that was part of his goal in writing the book. As such, Hacking the Future does an admirable job of laying out the current state of affairs on the internet, and it lays a good groundwork for understanding the darker side of the internet, giving its reader a fair assessment of what we should fear, and what we should not. As I mentioned in the beginning, however, the book doesn’t really look into why or how our behaviors have changed as the internet has gone social. He doesn’t delve into our increasing need to share minor (and major) details about ourselves with anyone who will listen, geolocating ourselves within a few feet. It’s likely that while Stryker wouldn’t see the need to "overshare" as being at odds with our increasing concern for the safety of our data (though of course the two feed directly off one another); he would simply defend our right to overshare anonymously, should we choose to do so.

Even if you don’t fully accept the argument that privacy and anonymity is the primary issue for the future of the internet, Hacking the Future presents a cohesive argument as to why we should protect these things regardless. His thought is a bit weaker once he approaches how these freedoms are to be protected, however. While he says he doesn’t think the government which so badly bungled SOPA, PIPA, and CISPA could be trusted with protecting a basic freedom like internet identity, that is, after all, what the US government has historically been fairly and consistently great at doing. After all, the freedom of speech (including the right to anonymous speech) is a constitutionally given right, one which does not have much in common with most of the world. This isn’t necessarily a knock against Cole Stryker — almost no one who advocates on behalf of privacy and anonymity has the perfect path forward mapped out. The point is to look for one.