Apple could have blown open the smartwatch market, but it instead chose to go after one more season of holiday iPod sales.

By all accounts, Apple's new iPhone 5 is a fine product, a line drive down the middle. It will easily sell millions and likely even break some records — the massive iPhone ecosystem alone will guarantee that. It's also a little boring, which has led to serious questions about Apple's willingness or ability to innovate.

But the iPhone 5 isn't the place to look for those answers. It's been deliberately engineered to be an iterative update to the iPhone 4S with a larger screen and faster networking, and that's what it is. People will love it, because people already love the iPhone. It might be boring, but Apple isn't going to take any risks with its biggest and fastest-growing business.

The biggest danger sign for Apple is the iPod nano. 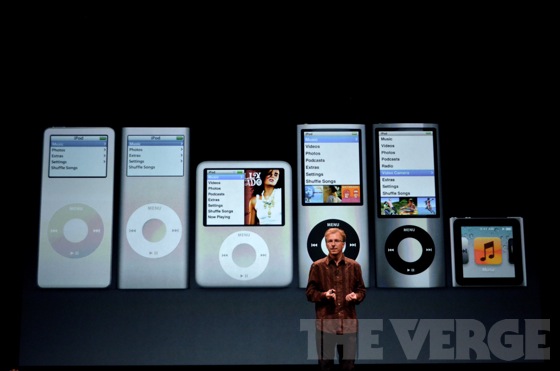 Apple loves reworking the nano — constant change is in the DNA of a product that itself was the bold replacement for the bestselling iPod mini. One year the nano was plastic. Then it was metal. First it was thin, and then it was fat. Then it was thin again. Then it was Apple's answer to Flip video cameras. Then another revolution as the nano became a tiny slab of aluminum with a multitouch screen just slightly bigger than a watch. Now the latest nano, which is once again tall and thin, with a 2.5-inch display and an ersatz riff on the iPhone interface.

The MP3 player market is dead, and Apple doesn't seem to know how to move on

Why all the changes? According to insiders, Apple reworks the nano every few years to kick off a cycle of upgrades — the $150 nano is an impulse buy holiday present that almost makes it seem like you care about the recipient. "It's a new iPod nano!" you say to your giftee. "It indicates my hope that something shiny will distract you long enough for me to escape without having to feel any genuine emotions in this situation."

But that's the old market, and the old way. It is, you might say, the Samsung or Sony way. It has not been the Apple way — iPod sales decline steadily every quarter, and cynically changing the nano into a tiny fake iPhone to juice sales one last time won't stop that slide. The MP3 player market is dead, and Apple doesn't seem to know how to move on.

There was a glimmer of hope a year ago, when Apple updated the previous watch-sized iPod nano with new clock displays and even began selling nano watch bands in its retail stores. The nano wasn't a very good watch, but the potential was blindingly obvious — it was Bluetooth and a connectivity protocol away from being the ultimate iPhone accessory. It felt like a brewing revolution in wearable computing that guaranteed an extra $149 in revenue from every iPhone owner.

And the demand for smartwatches is real, and growing from the grassroots. The TikTok and LunaTik iPod nano watch bands were the original Kickstarter success story, now sold in Apple stores. The Pebble smartwatch that connects to the iPhone shattered previous Kickstarter records and raised an incredible 10 million dollars in just over a month, with no clear ship date in sight. It became mainstream news, and the more people heard about it, the more people signed up. You don't need to do market research to figure out what people want in 2012; you just have to wait and see what nonexistent products the people are raising millions for all on their own.

"The nano in that form factor gave me a reason to have three iOS devices on my body."

Apple could have blown the smartwatch market wide open with the first truly must-have phone accessory in years. Even TikTok watch band designer Scott Wilson was ready for Apple to upend his business with an actual watch. "I was hoping they would keep it the same or tweak it a little so we could stay in the business," he told The Verge. "But if they didn't I was hoping they would at least make an Apple watch because I want to wear that." He's genuinely disappointed. "The nano in that form factor gave me a reason to have three iOS devices on my body, and now I don't." 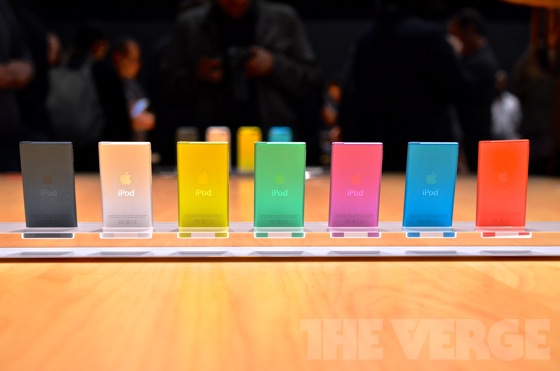 Instead there's the new iPod nano. It is a cautious step towards familiar price points and predictable sales numbers down a path of declining revenues, not a risky first step towards a revolutionary new platform. Worst of all, it's not even a compelling product. Take away the multitouch screen and it might as well be a Samsung Yepp from 2007. It runs a goofy proprietary OS, comes in just one storage size, doesn't support apps or popular next-generation music services like Spotify or Pandora, and generally makes no case for existing in a world where most teenagers get their music from YouTube. Anyone thinking about spending $149 on the iPod nano should tap-dance on street corners until they make the extra $50 it takes to buy the entry-level iPod touch instead.

Killing the iPod mini in favor of the much-improved iPod nano was once the shining example of Apple destroying the old to make way for the new. Now it appears to be a cynical ploy to squeeze the last drops of revenue from a fading empire.

It's no secret that Apple's iPod team was virtually disbanded after the success of the iPhone; many people left Apple, and the remaining high-level talent was reassigned to other projects. There's no clear focus or investment on the iPod and what it can become next — just what appear to be committee-driven decisions on how to maintain the revenue engine of the past. It is a dangerous sign for Apple's new leadership; Jobs was insistent that past success not forestall future innovation. "I hope that they're working on their own iWatch or whatever it is," says Scott Wilson. "Whether I'm in the business or not of making nano watches, that's what I want in the future."

Just think: if Apple had introduced a completely re-imagined iPod nano that served primarily as a watch companion to the exact same iPhone 5 on Wednesday, we wouldn't be asking if the company's products had gotten tired or stale or safe. We would be asking if Apple could make enough iPods to match its inevitably chart-topping iPhone sales.

More from this stream Apple's iPhone 5 announcement: everything you need to know