Samsung responds to the iPhone 5 with inflammatory new ad

Now that the iPhone 5's full feature list has been detailed, Samsung has taken it to task with its own, highly objective, spec sheet comparison.

Share All sharing options for: Samsung responds to the iPhone 5 with inflammatory new ad

Even after suffering a very public and costly defeat to Apple in the US courts, Samsung has lost none of its zeal in marketing itself up against Apple's latest and greatest. Now that the iPhone 5's full feature list has been detailed, Samsung has taken it to task with its own, highly objective, spec sheet comparison. On the Apple side of the equation you'll find such items as "a totally different plug," while the Samsung portion is padded out with pretty much every software feature the Korean company's been able to give a name to.

The cherry atop this cake of provocation is the slogan "it doesn't take a genius," which simultaneously pokes fun at Apple's Genius store employees and implies that choosing the Galaxy S III over the iPhone 5 is a no-brainer. Given the speed with which Apple sold out of its first batch of iPhone 5s, there are evidently quite a few people out there who'd disagree with Samsung's premise, but more importantly, isn't there room for both the GS III and the iPhone 5 in the modern smartphone market? Can't we all just get along? 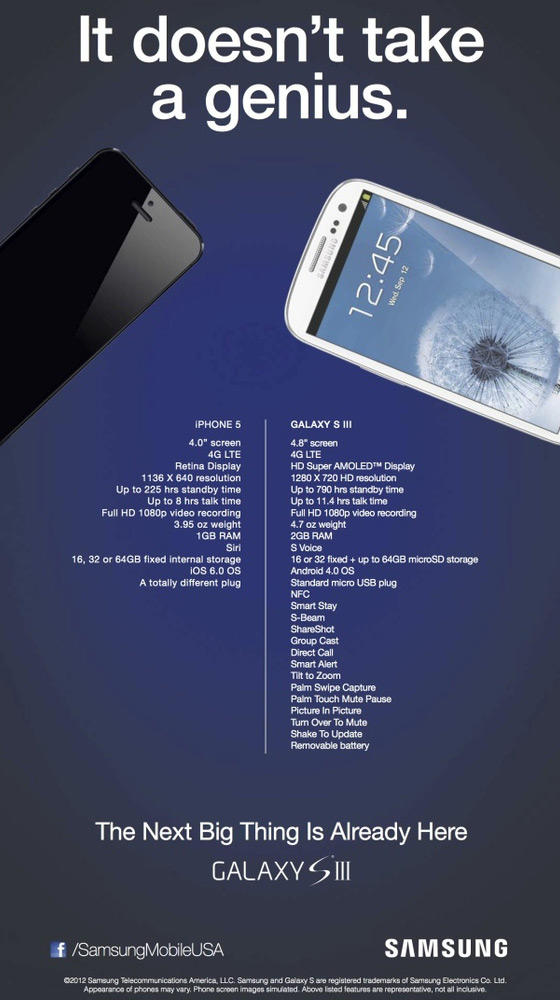 The #GalaxySIII is packed with 4G LTE, a 4.8" screen, and so much more. It doesn’t take a genius to choose The Next Big Thing.