There's an unending siege of fake name trends on Facebook. It has been cool at various times to insert an adjective for a middle name, abbreviate your initials, or remove vowels; legions of tween girls have changed their last names to "Bieber" to imply marriage to the pop star. In 2008, a journalist found more than 500 "Mike Hunts" and "Ben Dovers" each.

But as the general population gets more comfortable with the internet, subversive users are turning to subtler tricks that are nearly impossible for Facebook to detect: using a middle name as a surname, borrowing a fictional character’s last name, inventing a real-sounding name, and other distortions that violate Facebook's strict real-names policy.

"The name you use should be your real name as it would be listed on your credit card," Facebook says. "Pretending to be anything or anyone is not allowed." Unsurprisingly, many Facebook users continue to ignore these rules. Catching them is a growing headache for the social network as it attempts to build a business, but the crackdown on real names reflects a greater tension: the battle for control between a virtual government and its 950 million citizens.

Just as China's netizens use code words to evade government censors, Facebook users are finding ways to wriggle out of their constraints

"Facebook's mission is to give people the power to share and make the world more open and connected" has been the company's tagline since 2008. Founder and CEO Mark Zuckerberg believes that privacy standards are evolving toward a future in which people will want to publicize everything they do.

But at least for now, many users still want more privacy than Facebook's rules allow for. Just as China's netizens use code words and homonyms to evade government censors, Facebook's users are finding ways to wriggle out of their constraints and still enjoy the voyeurism, ease of communication, and other perks of being part of the social network. Use a pseudonym on Facebook? You're part of the resistance.

Drew Mason*, a 25-year-old Brooklynite who works in cosmetics, dropped his last name on Facebook after one of the site's well-publicized privacy kerfuffles. "Stories about employers checking Facebook for dirt on prospective employees were inescapable," he said.

He now uses his middle name, which is also a common surname. "I figured it would be a decent way to maintain a small degree of secrecy in my online identity without becoming totally unrecognizable to my friends," he said in an email. "At this point, I can't imagine putting my real last name on Facebook. I've gotten very used to my 'fake' name and it would creep me out to see my full real name up there." Mason estimates that 10 to 20 percent of his friends use modified-but-plausible names on Facebook.

His girlfriend Rachel, 24, uses her grandmother's maiden name as a surname. Like Mason, she finds her pseudonym doesn't interfere with using Facebook at all. "I debated going back to just using my real name, but at this point I don't need to," she said.

Chris Cason, 32, has gone by Chris Ca on Facebook since he registered in 2009 in order to make himself harder to find. He uses Facebook to stay in touch with international friends and post "rants and raves" about politics. Members of his family have started calling him "Ca."

Over the past year, he's noticed more friends subverting Facebook's real name policy. "I have seen a growing trend of people who will shut down one page, let you know that they're opening a new one, and then they'll use an alias," he said. He rattled off a few examples; one friend uses a split first name, another uses an abbreviated middle name. "It's usually some play on their first or last name, so you're like 'yeah, I see where they got that from.'"

Facebook estimates that nearly 83 million registered users are actually duplicated accounts, spammers, or non-people, like that profile you made for your puppy. That's a staggering number, and Facebook has acknowledged such "inauthentic" accounts as a potential threat to its brand and business. Facebook has also made its effort to crack down on nicknames and pseudonyms pretty public, allowing users to display "alternate" names only in parentheses.

There is no estimate for people who go by a realistic fake name, although the phenomenon could potentially pose trouble for the social network that wants to own your real identity on the web. 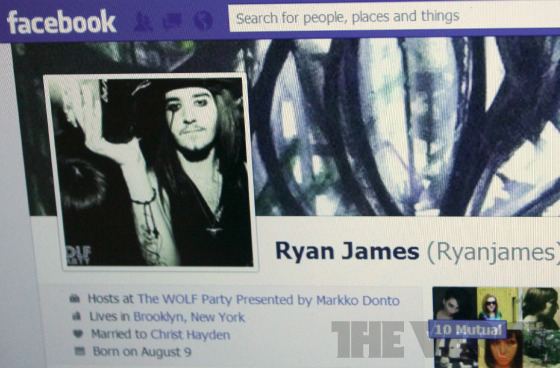 Ryan James, a Brooklyn-based promoter, uses his middle name as his last name on Facebook. "People will think it's my last name," he said. "They'll introduce me as 'Mr. James.'"

Facebook depends on its users to be honest. With 239,000 users for every Facebook employee, it's logistically impossible to verify all the information that is submitted. Fake names, fake ages, fake interests — all these inaccuracies interfere with the company's ability to accurately target advertisements. Facebook wants to build the world's most comprehensive database of people. If the information is current and correct, Facebook could eventually become a place where people bank or vote or even file taxes. If it's filled with errors, it nears uselessness — at least, as far as advertisers are concerned.

Real names are key to keeping the integrity of that database. By forcing people to use their real names, Facebook pressures users to mirror their offline identities. That’s why Facebook, now a public company, has made enforcing its real-names policy a top priority. Employees and automated systems trawl the site for fakers, sometimes sweeping up genuine users including Pulitzer Prize-winning author Salman Rushdie by accident.

"Facebook is a community where people use their real identities. When everyone uses their real first and last names, people can know who they're connecting with. This helps keep our community safe," a Facebook spokesperson said in an email. "It’s a violation of our policies to use a fake name or operate under a false identity, and we encourage people to report anyone they think is doing this."

Facebook has a dedicated investigations team that reviews user-reported aliases, and the company has also built and is constantly working on "complex technical systems that flag potential fake accounts for review," the Facebook spokesperson said. As a last resort, Facebook asks users to submit a form of government-issued identification.

Unfortunately for Facebook, there's little reason to dissuade users from tweaking their names. The strongest argument for using a real name is so that you can be found, but many users in the US and other mature markets have already built up large networks and are less anxious about connecting with new people. If you want to keep in touch with someone new, it’s easy enough to tell them what pseudonym to look for.

It’s obvious why you’d want to use your exact real name for something like LinkedIn or email. But for Facebook, the value proposition isn’t totally there yet. Google, which has positioned Google+ as a network of real people, has had some of the same problems; eventually, the company agreed to allow users to post under "established" pseudonyms (think Lady Gaga) as long as they verify their true identities first.

A video explaining a simple hack to get around Facebook's name change limit.

Michael Woodsmall, the 24-year-old managing editor of the newspaper where this reporter used to work, took the vowels out of his name in college when he noticed his friends taking precautions to avoid being found. "I didn't want any unnecessary attention," he said. "I did so in a way that I thought was, for lack of a better term, 'cool.'"

About half his friends use falsified names on Facebook, he said, with the middle-as-last-name gimmick prevailing, and he’s never found the practice to be inconvenient or annoying.

If Facebook tried to force him to add the vowels back in, he claims he’d quit. "I just don’t care enough," he said.

If there were some compelling reason to be himself on Facebook, he would. "Paying my bills on Facebook would scare the shit out of me," he said. "But if it translated into the rest of my life... perhaps being engaged in an organization I care about, where maybe being on Facebook helps to some extent."

Facebook will always have rebellious users who don't want to live in public. Those users will always find a way around the rules, even as Facebook builds increasingly sophisticated technology to police its grounds. The real-name resistance could be significantly reduced, however, if real names benefited users as much as they benefit Facebook.

The pseudonymous users we spoke to said they’d be willing to go by their given names if it made Facebook more useful — except for Mason. Even if Facebook were "an all-encompassing interface for life," he still wouldn't want to use his real name, he said. "If they tried to kick me off on account of my name, y'know, I'd quit before I was fired."

He’s temporarily deactivated his account several times, but can't seem to cut the cord. "Gotta keep up with my former acquaintances' terrible life choices," he said.