Large and in charge

When Samsung released the Galaxy Note, it was met with some skepticism. Do people want a huge phone with a huge screen that barely fits in your pocket, people wondered? Turns out they do, and the Note has sold gangbusters since it was introduced. It's been left mostly without competition, too â at least until LG unveiled the Optimus Vu, a 5-inch phone with a super-wide 4:3 aspect ratio.

The Optimus Vu is now known as the LG Intuition, and it's now available on Verizon. The logic for the phone seems clear: people are obviously willing to trade small size for convenience and features, so LG is taking that tradeoff to its extreme. The $199 phone has some serious competition on Verizon, though, from the also-large Galaxy S III, the newly larger iPhone, and more. Plus, there's another Note coming soon. Is LG giving the people what they want, or taking a good idea too far? Read on.

Editor markup for LG Intuition review pictures. This is only visible in the story editor.

When I showed it to people, everyone's first reaction to the Intuition was exactly the same: "What?!"

That's about right. The Intuition feels like someone measured a 7-inch tablet wrong, cut it a little small, and said to their boss, "let's just make it a phone." A 5-inch display is big, sure, but not overly so — the real culprit here is the 4:3 aspect ratio, which makes the Intuition so large you can hardly even hold it one-handed. The 3.56-inch-wide body is slightly wider than a credit card, so you can try this for yourself: grab a credit card from one side, and try to reach your thumb over and touch the other side. I certainly can't do it.

If the Galaxy Note is the middle ground between tablet and phone, the Intuition is six parts tablet for every part phone. You absolutely have to use this device in both hands, like a tablet; it really doesn't fit comfortably in a jeans pocket, also like a tablet. The only thing it does that resembles a phone is, well, make phone calls, and it's not really suited to that either. Galaxy Note-toting friends have told me they quickly acclimated to holding the big slab up to their face, but I doubt you'd ever get used to talking on LG's monstrous device.

For what it is, though, the Intuition's not a bad-looking phone. It has curved sides, a flat top and bottom, and a roughly textured back. There are four capacitive Android buttons below the display, styled like the on-screen buttons would be — it's a slightly odd choice, but I like having the persistent buttons. The phone is well-built, and solid. If you sliced a third of the phone off you'd have a device similar to the Optimus 4X HD, and I wish Verizon were carrying that phone instead of this one — the 4X HD's 4.5-inch screen is plenty large, but I can actually use it. 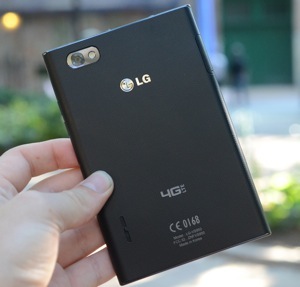 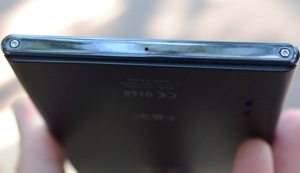 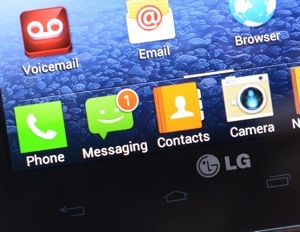 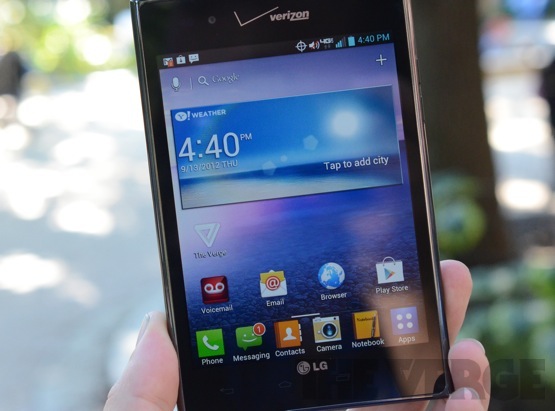 It may be humungous, but at least the Intuition's 5-inch display looks good. Its 1024 x 768 resolution equals that of the first two generations of iPad, and the LCD panel is sharp and clear. Text is crisp, without some of the jagged edges I've seen on other phones; at 256 pixels per inch the screen is plenty dense, though not quite in Retina territory.

Having a 4:3 aspect ratio fluctuates between useful and utterly pointless, depending on what you're doing. If you're reading or looking at websites, having some extra width is nice, and you also get an extra column for icons or more space for taking notes. But any time you try to watch a movie, you lose so much screen space to black letterboxes that you might as well be on a 4-inch phone. If you're a Netflix junkie, the Galaxy Note (and really any other good-sized Android phone) is a far better experience.

The Intuition's anemic mono speaker doesn't help, either — it's not very loud or impressive to begin with, and since it's located smack in the middle of the phone's back it's really easy to cover or muffle. 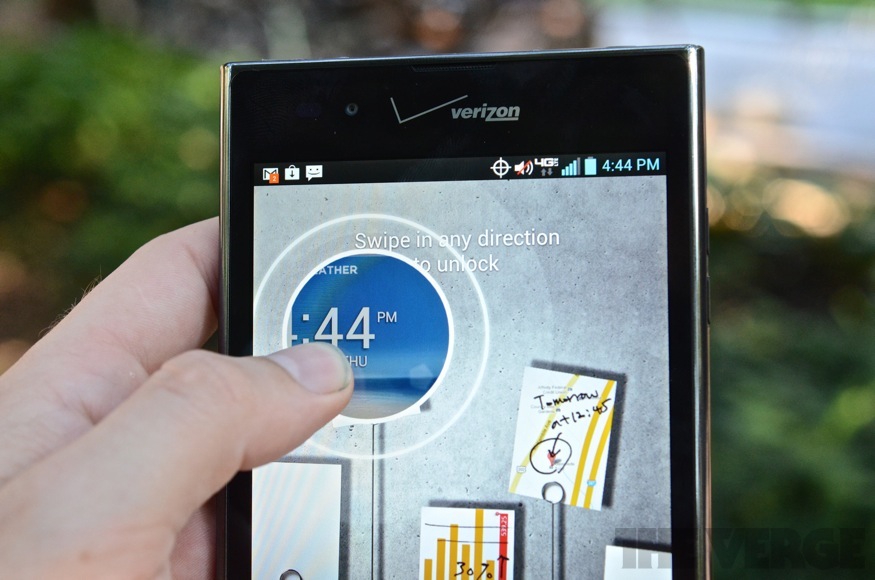 Remember on the original iPad, when you could choose to view an iPhone-optimized app at its native size in the middle of the screen, or blow it up so it would look blurry as all hell but at least take up the whole screen? The Intuition gives you similar options. When you open an app, the phone will automatically tweak it to fit your screen — mostly that means stretching images to make them fit the whole width of the device.

For text-heavy apps like Gmail or The Verge it looks okay, but anything more graphical looks warped and awful. You can long-press the home button to return the app to its normal aspect ratio, which puts black stripes on either side of the app, but the Intuition has trouble rendering that too. Text looks jagged in this view, some elements get cut off, and everything looks squished despite the fact that it's showing at its proper resolution.

That's why, for once, it makes some sense that LG redesigned nearly every core app on the device. The Intuition's messaging, mail, and browser apps all look fine at 4:3, and the calendar app has enough space to show a huge amount of information. LG's Notebook app (which is exclusively available on the Intuition) also takes advantage, giving you lots of space to doodle and take notes. 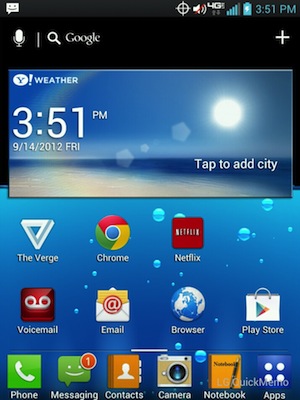 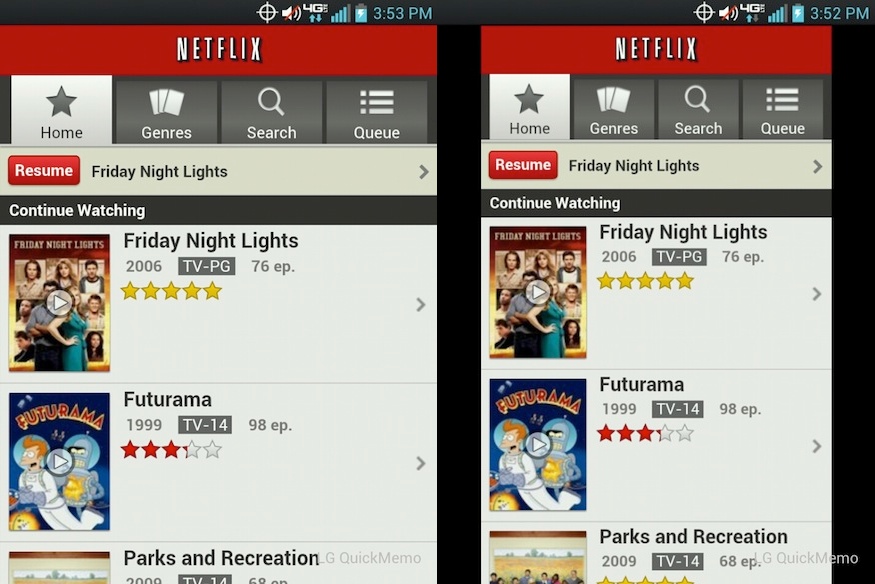 The Notebook app, incidentally, is where the advantages of the Intuition's design appear: having a wider, bigger canvas for taking quick notes or drawing is really nice. There's even a dedicated button on top of the phone, which you press to take a screenshot and immediately open it in Notebook. The app lets you create scrapbooks with images, video, screenshots, drawings, and the like — it's a pretty clever app. There's an optional pen accessory for the Intuition, but it's nowhere near as powerful as the S Pen. It's just a stylus, and LG reps told me your finger works at least as well.

I liked the Intuition most when I was typing on its keyboard. It's so big that it's absolutely perfect for holding in two hands and typing with two thumbs — I've never typed so quickly with an on-screen keyboard. It's not so good as to make me forget everything else I can't stand about the phone, but this giant handset is definitely a messaging powerhouse.

For more on the software running on the Intuition, I'll point you to our review of the Optimus 4X HD, because the two phones are virtually identical. The Intuition runs Android 4.0 plus LG's hyper-aggressive skin, which changes every color, icon, and menu it sees. I hate the look, but appreciate some of the added functionality — like the power and wireless controls in the notification pulldown and the cool NFC capabilities.

The only real software change is the Verizon-inspired bloatware, and it's quite a list. From NFL Mobile to Slacker Radio to Viewdini to all the red-icon carrier apps, Verizon's partnerships make themselves very clear on the Intuition. Verizon is nearly always the worst offender when it come to bloatware, and that's no different here. 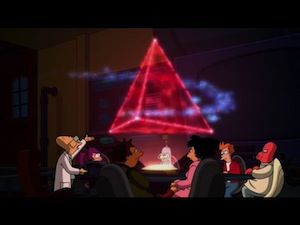 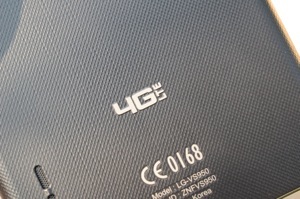 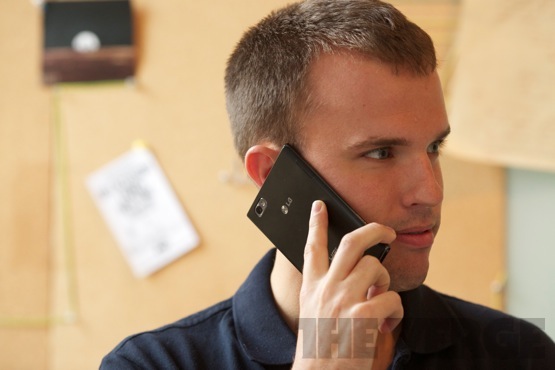 Qualcomm's Snapdragon S4 processor powers the Intuition, and I'm always happy to see that on a spec sheet: I've never seen an S4-powered phone not run fast and smoothly. The Intuition does nearly everything well, from gaming to video streaming to taking pictures, and LG's intense skin doesn't seem to cause any problems. There's some Android-caused lag in things like screen rotation and scrolling through apps, but nothing new or hugely problematic.

Browser performance was the lone exception, and it's a frustrating one. The Intuition's browser is slow, clunky, and has some serious problems with things as basic as scrolling. I downloaded Chrome and it helped a bit, but as a third-party app it's subject to the Intuition's stretched-or-scrunched conundrum.

For a while, I honestly forgot to test the Intuition's phone capabilities, because there's exactly nothing on the device that makes you think it's a cellphone. If you do decide to make calls on the monstrous device, it's fairly average: I could hear and be heard, but the earpiece is a little quiet and the microphone muffles sound slightly. Speakerphone sounds great, until you get more than an arm's length away from the phone, at which point you become totally inaudible to the other caller.

The 8-megapixel camera on the Intuition takes good photos for a cameraphone, certainly on par with the One X or the Galaxy S III. Photos are detailed and well-exposed, and even in bad lighting came out slightly more usable (though still far from good) than many other phones I've tested. Like many cameraphones, it's much better in decent light than in great light — too much sunlight overloads the camera and it can't expose properly. The camera can also shoot 1080p video, and it's exactly the same situation.

The 2,080mAh battery inside the Intuition is enough to get you through a full day, barely, as long as you use LTE sparingly — a two-hour Netflix movie over LTE drained nearly the whole thing, but with normal use (and lots of reliance on Wi-Fi) getting though a day was easy enough. Still, I long for a bigger battery inside the massive chassis. 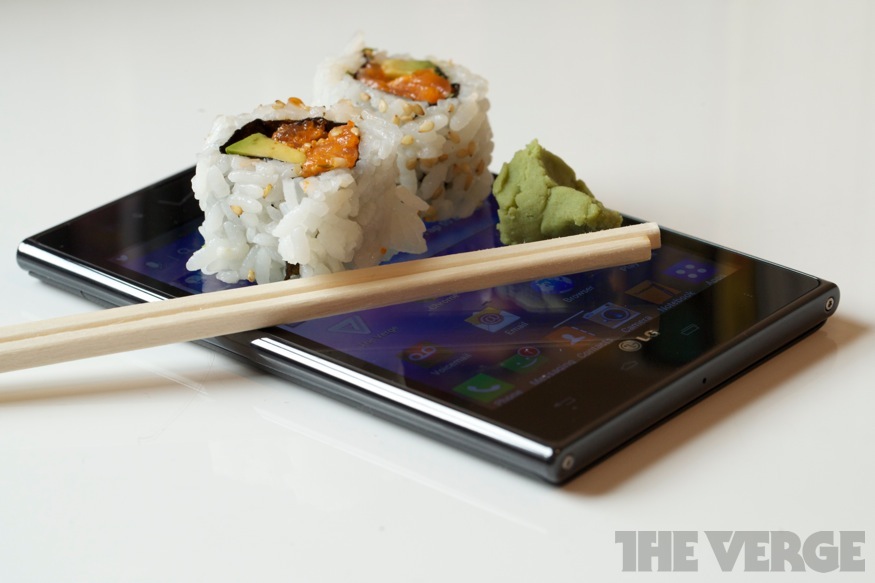 Our review of LG Intuition 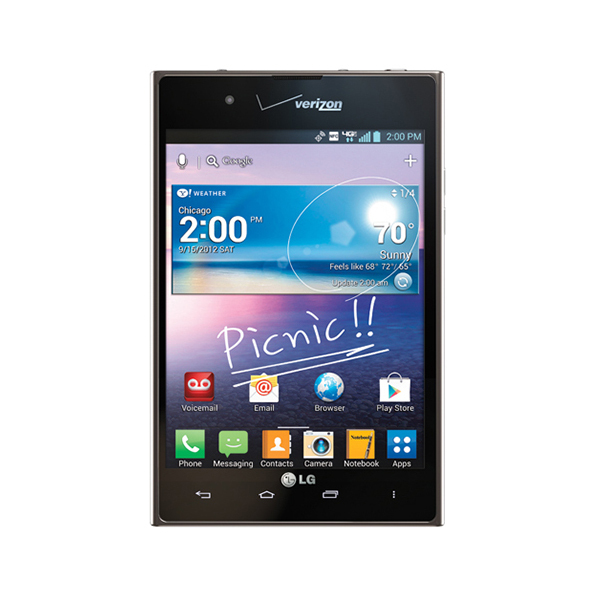 Don't buy this phone. Yes, it has a big roomy screen for all your note-taking needs (if those exist), but you make constant sacrifices just to get another column of icons on the screen. LG's skin is far from the best one out there, and the way the phone manages its 4:3 aspect ratio makes the third-party ecosystem a much worse proposition. Even pen input, which seems like the only way to functionally use this thing, isn't fully thought-out or implemented.

But beyond all that, the Intuition just doesn't work as a phone. It's too big to be comfortably used in one hand, or held up to your face for a phone call. If you want a big screen, get the Galaxy S III and its 4.8-inch display. If you want a giant screen, switch to AT&T or T-Mobile and get the Galaxy Note, which seems excessively usable after spending a week with the Intuition.

As I write this, LG's own Optimus 4X HD is sitting on my desk, and that phone would have a chance on Verizon's shelves. The Intuition doesn't.