Fitbit Zip launches today for $59.99 with Bluetooth 4.0 synchronization with iPhone 5, iPhone 4S, and new iPad. Fitbit One costs $99.95 when it goes on sale next month as replacement for Fitbit Ultra.

Today Fitbit is announcing the Fitbit One and Fitbit Zip activity trackers with Bluetooth 4.0 support. The company is also releasing an updated version of its iOS app that will allow both new Bluetooth Smart devices to synchronize directly with the iPhone 4S, third-generation iPad, and new iPhone 5 when it begins shipping later this month. The Android app, like the iOS app, is being updated with a more complete view of your data but it does not allow for direct device synchronization (a limited number of Android devices will be supported "soon"). Like the $149 Nike+ FuelBand and now defunct $99.99 Jawbone Up, the new Fitbit trackers are meant to motivate people towards their health and fitness goals by making them aware of their daily physical activity.

The $99.95 Fitbit One Wireless Activity + Sleep Tracker will go on sale later this fall (likely mid-October, we're told) when it replaces the Fitbit Ultra. Like the Ultra, it tracks steps, distance, stairs climbed, calories burned, and quality of sleep when worn on the wrist at night. The smaller Fitbit One, however, adds a silent vibrating alarm like the Jawbone Up, black and burgundy color options, and brighter LED screen. Importantly, the new two-piece sleeve design is said to clip onto your clothing more securely to help prevent loss of your hundred dollar accessory — a common complaint from Fitbit Ultra owners (I personally, have lost two Ultras after the trackers slipped off my clothing).

The $59.95 Fitbit Zip is on sale today as an entry-level device. It's available in five colors — magenta, lime, blue, charcoal and white — and features a new tap interface that lets you toggle between your daily steps, distance, and calories burned by simply tapping anywhere on the Zip tracker. The diminutive Zip offers a similar two piece sleeve design as the Fitbit One but opts for a non-rechargeable coin battery good for about four to six months of charge. 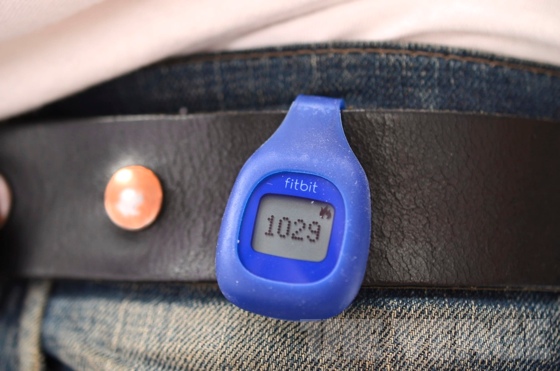 I've been using a Zip tracker for the last few weeks and found it to function exactly as I had expected given my previous experience with both the original Fitbit and the Ultra followup. While the iOS app wasn't available for direct to device Bluetooth 4.0 testing, the small USB dongle for PC and Macs that ships with the Zip automatically synced the Zip data to fitbit.com whenever the two were within a 15-foot range.

The new water-resistant design held up to rain and sweat without any issue. And while the material is certainly stickier than the hard plastic of the Fitbit Ultra, the Zip still came loose from my belt and pocket three times during everyday use: once while seated in an airplane, once while bending over to unlock a bicycle, and a third time while getting out of a chair. Fitbit could solve this by introducing a wristband to better secure the tiny Zip module but it's not announcing any such accessory today. 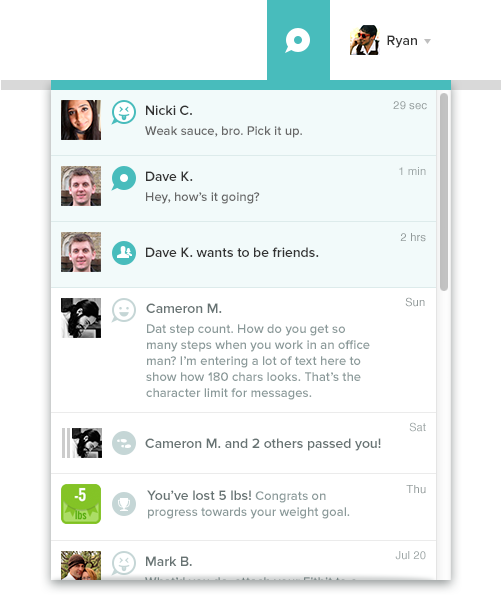 I was also treated to a preview of friend-to-friend messaging and iOS notifications in future updates to the Fitbit app. F2F messaging allows you to cheer (or jeer) in response to your Fitbit friends' activity, whereas Notifications keep you abreast of your most important milestones. While none of this is revolutionary, the new features do enhance the motivational and community aspects of Fitbit's pioneering effort in personal fitness tracking, which you can now join for as little as $60.