The new Panasonic DMC-GH3 Micro Four Thirds mirrorless camera has a host of new features aimed at the professional user.

The Panasonic Lumix DMC-GH2 of 2010 was never marketed or intended to be a camera for professional users, but its solid video quality and compact design made it a favorite of many pro videographers (including the video team here at The Verge). Two years later, the Japanese camera company is hoping to capitalize on that interest with the new Lumix DMC-GH3, a bigger, badder version of the GH2 with a host of pro-friendly features. A member of Panasonic's Micro Four Thirds family, the GH3 is the highest-end mirrorless camera the company has ever produced, and is loaded with top-level features.

The GH3's Live MOS sensor features the same 16-megapixel resolution as the outgoing GH2 (though Panasonic insists that the Micro Four Thirds sensor is all-new), but nearly every other aspect of the camera has been upgraded. It has an improved contrast AF autofocus system, better low-light sensitivity (up to 25,600 ISO in extended mode), and a faster burst rate of 6 frames per second (with optional 20 frames per second at a reduced 4-megapixel resolution). All of these new features are packed into a new magnesium alloy chassis with splash-proof and dust-proof weather sealing — both of which are firsts for Panasonic's Micro Four Thirds line. The GH3 has an all-new three inch, variable-angle touchscreen OLED display with 614k-dot resolution and a new OLED electronic viewfinder with 100 percent field of view and 1744k-dot equivalent resolution. Also new for the GH3 is built-in Wi-Fi connectivity, which lets photographers transfer images directly to a computer or smartphone, as well as control the GH3 with Panasonic's apps for Android or iOS.

A bigger, badder version of the GH2

In addition to all of the new still photo features, Panasonic has equipped the GH3 with a host of new professional video features. The camera was designed with the pro videographer in mind (see filmmaker Philip Bloom's new short Genesis below) — the company says that 70 percent of the features requested by pros in the GH2 have made it to the GH3 — and it includes niceties like Time Code support, 3.5mm microphone and headphone jacks, and higher-bitrate HDMI output than before. The camera can shoot up to 1080p video at 60 frames per second, and videographers can also opt to record at 30 or 24 frames per second if they wish. The GH3 can record ultra-high-bitrate files of up to 70Mbps for an unlimited amount of time thanks to its ability to automatically generate multiple seamless files. The camera has stereo microphones for audio recording in addition to the external microphone jack, and supports Dolby Digital in AVCHD modes and linear PCM(LPCM) in MOV mode. Video shooters can take full manual control of exposure, as well as shoot in slow or fast motion modes. The touchscreen display also affords Touch AF, which Panasonic claims offers "professional-like rack focusing" to go along with the continuous full-time AF, AF Tracking and Face Recognition modes available.

From first glance, the most noticeable thing about the GH3 is just how large it is. Dwarfing the GH2 and other cameras in Panasonic's range, the GH3 is much closer in size to a Canon Rebel T4i or Nikon D5100, making it quite large for a Micro Four Thirds camera. Panasonic is quick to point out that the GH3 is significantly smaller than other pro-level cameras, however, and it notes that demanding users appreciate the larger size and improved handling that comes with it. The camera is littered with buttons and dials, making it very easy to make adjustments while on the fly, and the solid feel of the GH3 inspires confidence when you are using it. The company is also planning to release a host of professional accessories for the GH3, including an optional battery grip, external microphone, and external flash unit.

Along with the launch of the GH3, Panasonic is also introducing a new 35-100mm f/2.8 Power OIS lens to accompany the existing 12-35mm f/2.8 Power OIS lens. The new lens offers a 70-200mm equivalent field of view, constant f/2.8 aperture, and has a silent zoom and autofocus system ideal for video recording. Panasonic has not yet revealed how much the new lens will cost.

Panasonic says that the Lumix DMC-GH3 will be on shelves in time for the holiday shopping season, but don't expect to see it at your local Best Buy or Target. The company will only offer it online or through specialty photo shops, which isn't terribly surprising given its expected price tag of just under $2,000. 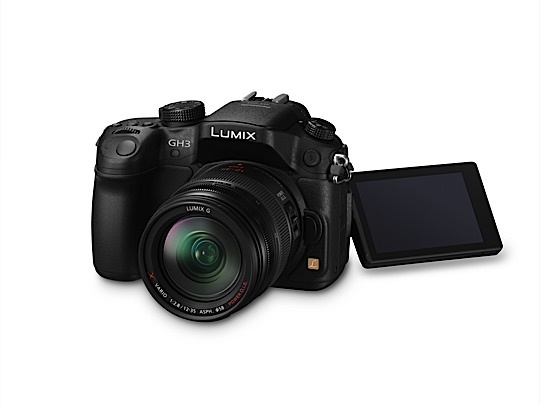