Canon's schizophrenic 6D can't decide whether it's for amateurs or pros

Just what does the Canon EOS 6D want to be?

Share All sharing options for: Canon's schizophrenic 6D can't decide whether it's for amateurs or pros

Just what does the Canon EOS 6D want to be? Reading the company's press release would suggest the answer's obvious — it's Canon's lightest, smallest and cheapest full-frame DSLR yet, squaring up against the similarly lauded D600 from Nikon — but viewed in the cold light of day, this camera just doesn't seem to add up. Yes, it matches the D600's $2,100 price point, but it falls behind almost immediately with a limited 11-point autofocus system, slower burst mode, lack of headphone jack or integrated flash, and a single (rather than double) SD card slot. More importantly, the 6D doesn't appear to be a clear-cut upgrade over Canon's venerable 5D Mark II, which continues to sell for around $1,500 in the US. If the poor man's 5D is still the older-gen 5D, where does the 6D fit in?

The EOS 6D won't be an outright replacement for any product in Canon's portfolio, though it's clearly a combination of multiple well-liked older models. Physically, it's about the same size and weight as the cropped-sensor EOS 7D, plus it's about as rugged thanks to a magnesium alloy frame and a similar level of weatherproofing. The control scheme is altogether different, however, as the 7D's column of left-handed controls have been dismissed in favor of a more frugal button layout that puts the emphasis on right-hand operation. Handling the 6D feels like an odd mix of the 7D and the smaller, more consumer-oriented 60D. 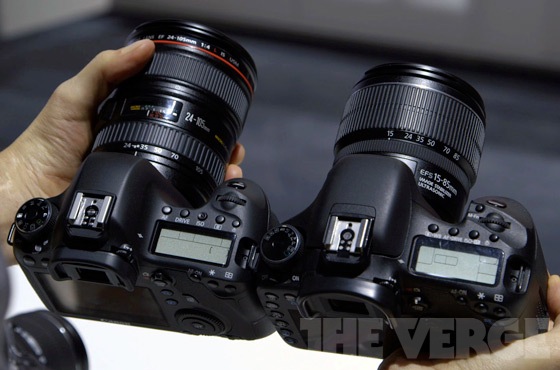 The DIGIC 5+ processor inside the 6D can be considered a trickle-down feature from Canon's flagship 1D X and 5D Mark III DSLRs, though it'd be unfair to depict it as purely a Frankensteinian concoction of older Canon hardware. The 6D's 20-megapixel sensor is altogether new, its AF system rather embarrasses Nikon in the low-light sensitivity stakes by being able to focus right down to -3 EV, and it breaks new ground among high-end cameras by integrating Wi-Fi and GPS into the body instead of requiring separate dongles. The question the 6D doesn't seem able to answer is whether it wants to compete in that high-end professional realm. Its neat novelties are offset by weird cutbacks — most infuriating among which is the lack of a headphone jack, severely hampering its utility as a pro video camera.

Canon's EOS 6D is a full-frame DSLR that's still priced just outside the reach of most consumers, but it has a definite consumer appeal. Ultimately, if there's any one particular group that Canon is targeting with this camera, it's the moneyed enthusiast looking for a step up from the 7D and 60D. That'll be something the 6D surely delivers, if only by virtue of its larger sensor.