We spent some time with the new Nikon Coolpix S800c, and came away unimpressed.

Two companies lead the Android camera charge, and at Photokina in Germany both are going way out of their way to talk about it. Samsung held a press conference nominally to announce two lenses, but mostly to talk about the new Galaxy Camera; Nikon's event introduced no new products but spent a long time telling us about the Coolpix S800c, and why Android is the future for digital cameras.

The S800c piqued our interest perhaps even more than the Galaxy Camera, because it's a much bigger departure for Nikon. Samsung already makes plenty of Android devices, so slapping a big lens on a 4.8-inch Galaxy Player doesn't seem like much of a stretch. Nikon, on the other hand, is a photography behemoth, and we've seen it and its competitors mostly stay their technological course. Nikon's also one of the few companies that can bring a feature to the photography mainstream by sheer force of will, so if it can make a great Android camera others will undoubtedly follow suit quickly. Unfortunately, though, if our first impressions are any indication then Nikon's first Android effort is pretty seriously lacking.

The S800c may be a nice-looking point-and-shoot with a big touchscreen and a slender body, but the end result is more reminiscent of a two-year-old phone than a modern digital camera. The S800c runs Android 2.3, and using the camera brought back the lag- and crash-filled memories of our phones from 2010. The operating system has hardly been customized, either, save for Nikon's adding quick access to camera functions and removing most other icons. 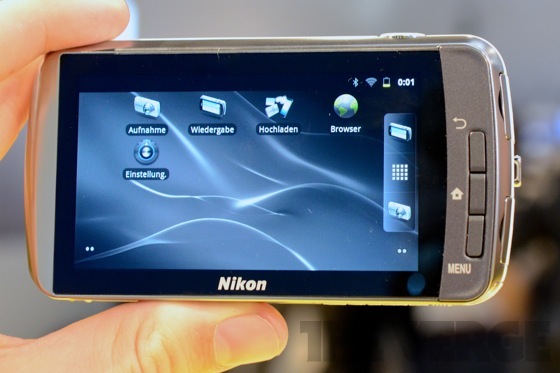 The biggest issue in my time with the S800c was simple: it's slow. And slow is one thing on a phone, but it's far worse on a camera. Your camera needs to take a shot as soon as you want it to — every miilisecond of lag is a perfect shot you didn't get. So the fact that the S800c won't even launch the camera app from anywhere but the home screen (pressing the shutter release does nothing otherwise) is a huge problem. So is the fact that it took two or three tries to turn the camera on every time, and that it took five seconds or more each time before it was ready to take a shot.

I assumed these problems were native to Android, that it just wasn't a good OS for cameras. But the Galaxy Camera is fast and responsive, and feels as if its version of Android were tuned for the use case, whereas the S800c's OS feels haphazardly applied. Samsung built a clever, intuitive camera interface that reminds me of Sony's NEX cameras — it's not as fast as a DSLR, certainly, but it's easy to change settings and move through menus. Plus, when you hit the shutter button it jumps straight to the camera app no matter where you are.

Speed and responsiveness are critically important for a camera, and Nikon delivers neither

The only time Android feels like a positive for the S800c is after you've taken a picture. Sharing shots is in fact fantastically simple — just the fact that it only requires a single device is wonderful. The S800c also seems to take pretty good pictures, though we haven't been able to review them carefully yet.

When talking about the S800c, Nikon talks constantly about sharing — Android provides fast, easy ways to get pictures off your camera and onto the web. But for an Android camera to work, it must provide more: it needs to be fast, intuitive, and optimized for photographers. Sharing is good, but only if you've got great pictures to share. Samsung seems to understand that, but Nikon's lagging behind.