Life after Twitter: StockTwits builds out its own ecosystem

As Twitter transforms from an open web platform to a more traditional media company, startups that built on top of it, like StockTwits, are leaving in search of new ways to grow their business.

As Twitter transforms from an open web platform to a more traditional media company, startups that built on top of it are leaving in search of new ways to grow their business. StockTwits founder Howard Lindzon doesn't mince words. "We've moved off the platform and so will everyone else. If we hadn't done that, we would be dead in the water."

StockTwits is a real-time micro blogging service, but one devoted to discussion of finance, markets, and the economy. It began largely as a community of users on Twitter, where it pioneered the use of the $ sign to collect conversations around certain stocks — a convention which Twitter recently copied, much to Lindzon's dismay."It’s interesting that Twitter has hijacked our creation of $TICKER ie. $AAPL. It only took four years to ‘fill‘ this hole, though a few months back they told me in a detailed email it was not a hole they wanted to fill. You can hijack a plane but it does not mean you know how to fly it."

StockTwits has created its own technology platform independent from Twitter, and Lindzon says that 70 percent of the messages flowing through its service are now made off Twitter, generated by users who have signed up for StockTwits itself.

"You can hijack a plane but it does not mean you know how to fly it."

Real-time sentiment data from financial experts is a particularly valuable commodity. StockTwits sells its feed in several different ways: hedge funds and other money managers pay for access to its data. Media companies like Bloomberg, Reuters and Yahoo Finance draw on the StockTwits feed for real time opinion and context on news. And the company has also quietly released an API which is being used by financial startups like Estimize and Trading View. "We're building out our own ecosystem with a broad range of partners across finance, media and tech," says Phil Perlman, StockTwits' executive editor.

Up until today, StockTwits' sentiment analysis was based on the text that appeared in users' messages. This morning, StockTwits announced a new sentiment button, which lets users declare themselves as Bulls or Bears when discussing a certain stock. "This is just the first baby step in creating the best source of quantifiable, real-time sentiment data around the markets," says Lindzon.

Twitter is clearly many times larger than StockTwits. But Lindzon believes the quality of the conversation around finance will be the difference. Searching $IP on StockTwits, for example, produces a long stream of messages about International Paper. Searching the same $IP on Twitter produces a mish-mash of tweets, some about International Paper, but many from users like Dogg Man and Oh Ok, who use the dollar sign as a form of slang. The problems only get worse around $HIT (Hitachi) and $WAG (Walgreens). 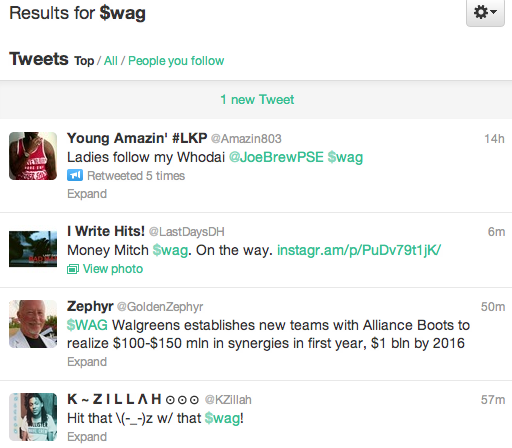 Lindzon believes that StockTwits' departure from its parent platform is a trend that will continue, with tightly focused communities moving off Twitter in search of better conversation. "After seeing what happened with StockTwits, I've invested in startups like Witstream, which is like Twitter for comedians. The same thing could happen for politics or sports. For Twitter, its going to be a death by a thousand cuts."