Sprint will begin selling the iPhone 4 as an online-only item starting this Friday.

Share All sharing options for: Sprint will only sell the iPhone 4 through its online store starting Friday (update)

Sprint customers looking to get a free iPhone 4 this Friday may be disappointed, at least for those planning to pick one of from a local store. 9to5Mac has received a leaked internal document suggesting that the provider plans to remove the handset from its retail floor plans starting September 21st, the day the iPhone 5 will be released. Considering that the document only makes reference to in-store displays, and also mentions a $100 price drop for both the iPhone 4 and iPhone 4S, customers may still be able to get the two-year old device online. Apple's site, for example, is currently offering it for free from the carrier. 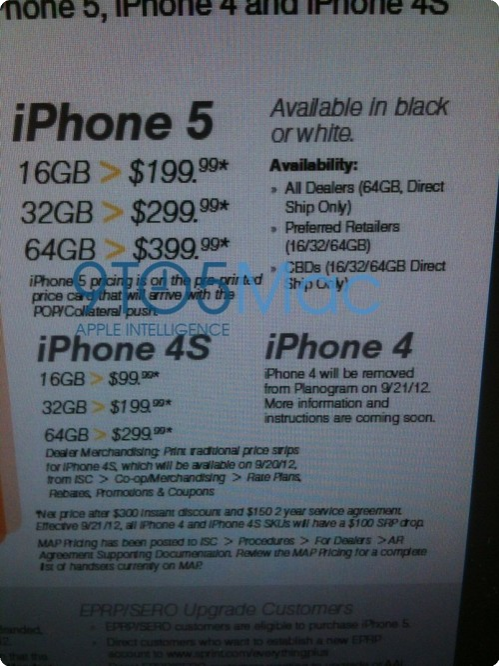 With every release of a new iPhone, the two previous models have received a $100 drop in price, and this year doesn't look to be any different. Apple's press release for the iPhone 5, however, does mention that availability for the discounted models will vary by carrier. So while the extra-affordable iPhone 4 may not be sitting in a Sprint store come Friday, it appears that customers will still be able to pick one up directly through Apple.

Update: CNET has received confirmation of the change, with a Sprint spokesperson stating that "iPhone 4 will become a Web-only device effective on September 21. We will certainly still be selling it." The move could put Sprint at a disadvantage when compared to other carriers, should the likes of Verizon and AT&T continue to offer the device in their own retail locations. Then again, Sprint made a notably costly deal to carry the iPhone in the first place, and by reducing shipping costs to retail stores — as well as cutting down the need for store shelf space to carry the phone — it may be turning to online-only sales in order to maximize its iPhone 4 profits.