Share All sharing options for: HTC rekindles its old Microsoft romance and bets on Windows Phone 8

High Tech Computer (HTC) has grown up with Microsoft, from the old HTC-built iPAQ's running on Microsoft's Pocket PC operating system, to the Orange SPV — Microsoft's first Windows smartphone. The Taiwanese company has always been a loyal aid to the software giant, but lately that close relationship has started to feel a little dated. HTC's investment in Android and its Sense user interface has taken precedent over its initial work with Windows Mobile, and the company's Windows Phone flagships have been impressive, but overshadowed by Nokia's colorful Lumia range and partnership with Microsoft. That all appears to be changing though.

"We're super excited about being there for the next launch."

Speaking to The Verge recently, HTC's Graham Wheeler, tells us that the company is "super excited" about Windows Phone 8. "Our first phones were Windows devices, we've been there with every major launch," says the EMEA Director of Commercialisation Product Management. This excitement stems from a direct instruction from HTC CEO Peter Chou, who asked his team to focus on a Windows Phone 8 handset. "Peter started a briefing with us," he explains. "He just asked us to look at the device and start afresh with the Windows Phone 8 OS and actually design a phone that's inspired by the Windows Phone 8 OS." 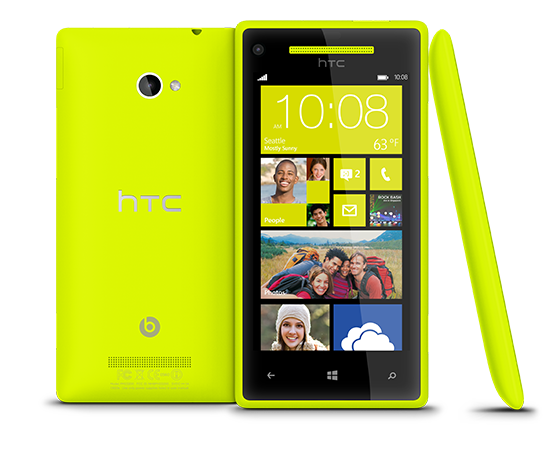 The result is two Windows Phone 8 smartphones — the 8X and 8S — that are designed to mimic the Live Tiles of the Windows Phone 8 operating system, with the 8X the flagship design. "We started with a clean sheet of paper and the designers actually took inspiration from the Start screen and actually Live Tiles," says Wheeler. "So they thought about a Live Tile and how that would look if it was actually…something you hold." The 8X doesn't look like a Live Tile per se, but it's clear from holding the device that HTC is serious about Windows Phone 8. With a 4.3-inch super LCD 2 display, Beats Audio, and a front facing camera that will capture 1080p video — HTC has created a beautiful and lightweight Windows Phone 8 device that will rival Nokia's own Lumia devices.

"Peter requested us to start afresh."

Under the direct instruction from Chou, HTC's team of designers and engineers created mockups to start showing to operators. "That's how we started showing it around, getting really great reception from operators, but also, which was really good for us, we got great reception from Microsoft," Wheeler explains. "They really loved our designs and actually said it really embodied what they were trying to show with the Windows Phone 8 OS."

HTC's 8X look and feel — with bold colors and a curved design — is designed to represent the colors that are found in Windows Phone 8. "We have looked at the color palette and actually harmonized the color palette of the software on the inside with the actual the color of the outside." If you buy a California Blue Windows Phone 8X then you'll get blue tiles throughout the OS too. "It is taking its inspiration from a Live Tile, tapering the edges so allowing us to actually make sure it feels thin in the hand and actually keeping the actual thickness of the phone feeling a lot thinner than it is when you hold it."

"Our devices will be the signature devices."

The close partnership between HTC and Windows Phone is surprising given Microsoft's focus on Nokia, but the software giant, like a doting parent, seems to be equally happy about HTC's Windows Phone 8 devices. "Pairing HTC’s beautiful new Windows Phone 8X and 8S with our brand is a big milestone for both companies," says Microsoft CEO Steve Ballmer. "Together we are offering customers a clear choice and a truly unique experience. I’m thrilled to take our longstanding partnership to the next level."

"Windows Phone has clearly emerged as one of the top mobile ecosystems and is competitive against any other smartphone platform in the world."

HTC remains committed to Android and Windows Phone, with CEO Peter Chou commenting that "Windows Phone has clearly emerged as one of the top mobile ecosystems and is competitive against any other smartphone platform in the world." Likewise, Wheeler feels that things have moved along since the original Windows Mobile devices. "You almost had to take the sales assistant's word that it was a Windows device because they didn't look anything like Windows, whereas the advantage is now obviously with Windows 8 and Xbox looking very similar, you have a consistent feel."

A unified platform may well assist Microsoft with its Windows Phone efforts, but we'll have to wait for Windows 8 and Xbox to deliver this holiday season to judge that further. The vision is in place for Microsoft, but its execution has to be precise with a modern marketing campaign. HTC has clearly bought into that and rekindled its romance — will former fans of Windows Mobile who abandoned the platform for the relative green fields of Android and iOS follow too?