An in-depth comparison between the latest Windows Phone 8 smartphones from Nokia and HTC.

If Nokia was hoping it would face minimal competition for the Windows Phone crown this holiday, that notion was quickly squashed with today's announcements from HTC. In fact, HTC's pairing of the high-end Windows Phone 8X and mid-range 8S seems like a direct counter to the approach Nokia is taking with its Lumia 920 and 820. It's hard to believe we still don't know the final details of what to expect from the operating system that will be running on these devices when they ship in the coming weeks, but with Nokia already having fired the opening salvo, we can at least compare the hardware directly.

No shortage of colors to pick from

There's a major decision facing those who've been eagerly awaiting the next generation of Windows Phone hardware, and that's which flagship device to go with. Physically the HTC 8X and Lumia 920 are alarmingly similar in design philosophy. Both are encased in finely-crafted plastic shells and available in a number of vibrant color tones. In terms of raw size, the 8X is taller but also less wide owing to its slightly smaller 4.3-inch display. That could carry the benefit of easier one-handed use compared to the Lumia's 4.5-inch screen. It's nearly a draw when it comes to resolution, though, with the 1280x768 panel on the 920 edging out the 720p panel on the 8X. Again, that's attributable to the extra real estate on the 920 more than anything else, and we expect most users will have a tough time picking a clear winner. Each of the lower-end handsets feature identical WVGA resolution, so that's essentially a wash. 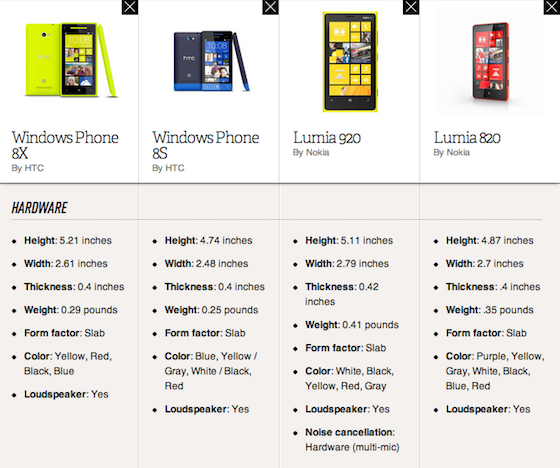 We've certainly grown familiar with Nokia's prized PureView camera technology utilized by the Lumia line, and HTC is also promising good things from the 8X's 8-megapixel shooter. If videoconferencing is of particular importance — and 720p video somehow doesn't meet your standards — it's worth pointing out that HTC has included a 1080p front-facing cam in the 8X. For the mid-range couple, the Windows Phone 8S ranks below the Lumia 820 thanks to a lesser 5-megapixel sensor and 720p video constraints.

Internals that are much the same

There are significant differences in the storage department, as each Nokia device provides twice the built-in capacity of its respective HTC rival. With expandable microSD as an option in both cases, that might not matter much to you. But what about processing power and memory? There's just not much to say on the topic. Thanks to the guidelines Microsoft has set for its Windows Phone partners, you're met with four phones that all contain Qualcomm Snapdragon S4 chipsets. Speed and responsiveness have always been strengths for Microsoft's mobile OS and performance should improve markedly in these upcoming devices, but their internals likely won't be the deciding factor in which handset you pick. The 8S does have a slight disadvantage in terms of RAM, offering only 512MB in contrast to the 1GB found in the Lumia 820. That could play a role if you're frequently playing demanding games, but shouldn't impact day to day usage.

So which will it be? Are you still loyal to Nokia's Windows Phone cause, or will HTC's extensive carrier availability seal the deal? For the full spec rundown, check out our database comparison below!

More from this stream HTC's new 8X and 8S with Windows Phone 8: the full story