Apple has just pushed out OS X Mountain Lion 10.8.2 just moments after releasing iOS 6 to the general public. The update makes available a variety of features that put OS X on par with iOS, namely Facebook integration inside Notification Center, Game Center, Contacts, and photo-sharing. 10.8.2 also includes Power Nap support for late 2010 MacBook Airs, as well as consolidated AppleIDs and phone numbers — which means that iMessages sent to your phone number will now also appear in Messages on your Mac.

There are also a variety of bug fixes and feature updates, like Passbook support inside Safari and Mail, shared Reminder lists, and URL shortening when tweeting from Notification Center. Apple even fixed up the Save As... function many people lamentedin Mountain Lion's previous verison. Also, here's our full review of Mountain Lion in case you're still considering the upgrade.

On a final note, Apple also released OS X Lion 10.7.5 which includes bug and stability fixes as well as Gatekeeper, which aims to protects you from apps not signed by Apple. Open up Software Update on your Mac to grab the update, and see below for an image of the entire change log. 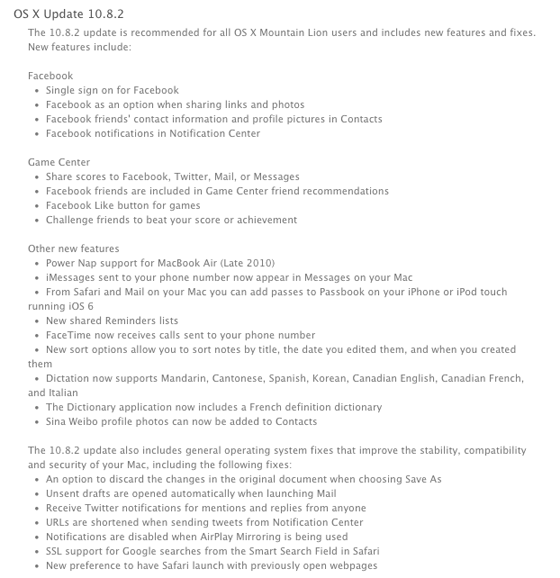