HTC, Nokia, and the Live Tiles that bind

Though HTC and Nokia are competing companies, they are aligned against common enemies in the smartphone market through their partnerships with Microsoft.

Share All sharing options for: HTC, Nokia, and the Live Tiles that bind

HTC made a bit of a splash today when it and Microsoft announced the new Windows Phone 8X and Windows Phone 8S smartphones. The 8X and 8S represent a new focus on Windows Phone for HTC — at least for today — and rekindle the relationship Microsoft and HTC have had for the better part of 15 years.

In fact, Microsoft's influence on these new devices is so strong, it literally named them for HTC. Putting "Windows Phone" right in the name of the smartphones sends a clear message to consumers: if you want a Microsoft smartphone, this is where you go. Microsoft has committed to a heavy promotion of HTC's new devices, and it's even gone so far as to call them the "Signature of the Windows Phone 8 brand."

If you want a Windows Phone smartphone, this is where you go

But that raises some questions about Microsoft's relationship with its other big Windows Phone partner, Nokia. Until this point, Windows Phone was synonymous with Nokia's Lumia line, and the new Lumia 920 has been positioned as the flagship device for the platform. Now that HTC and Microsoft have reignited their long lost love, it seems that Nokia is not Microsoft's only darling child. The Finnish company might have acknowledged that, given its terse statement concerning HTC's announcement today.

And frankly, Nokia should feel ripped off. Looking at the 8X and 8S, with their loud color schemes and boxy designs, Nokia's design influence is apparent. It's almost as if HTC took Nokia's playbook, lifted the pages about design, and then made some strikingly Lumia-like devices. All of this with Microsoft's blessing, approval, backing, and on-stage support from Microsoft's CEO. 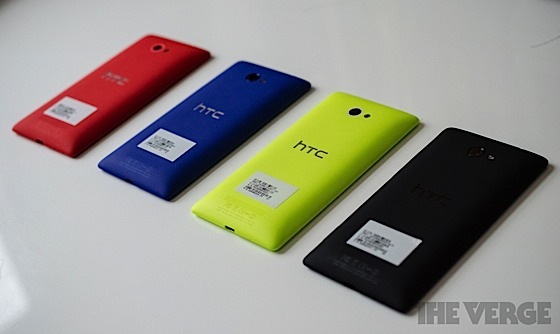 But in the long run, this family feud may not matter all that much: both Nokia and HTC are aligned against common enemies. One, of course, is Apple — and the other is Samsung, an occasional Windows Phone entrant more concerned with selling as many phones as possible than with selling phones carrying the Microsoft logo. The only problem? Two years on, no matter how colorful, Windows Phone has yet to prove that it can turn any of these companies a profit.