The dream of the internet is alive in Portland: inside the XOXO Festival

The dream of the internet is alive in Portland: inside the XOXO Festival

In Portland last weekend, the first-ever XOXO Festival offered a heartwarming affirmation for 2012: despite the noise of profiteers, ranting analysts, and social media douchebags that saturate the internet, the most powerfully innovative force in modern culture comes from artists, hackers, and creative entrepreneurs.

In Portland last weekend, the first-ever XOXO Festival offered a heartwarming affirmation for 2012: despite the noise of profiteers, ranting analysts, and social media douchebags that saturate the internet, the most powerfully innovative force in modern culture comes from artists, hackers, and creative entrepreneurs. Skipping the middleman is no longer a dream — it's the default setting for an entire generation. New authoring tools, changes in digital distribution, and platforms like Kickstarter, Steam, and Etsy make easier than ever to find your audience, trust your passion, and make the things you want to make.

You can offer that affirmation online, but it sure works better in meatspace.

Everyone who came to Portland last weekend really, really wanted to be there. When the XOXO Kickstarter project launched last May, founders Andy Baio (of waxy.org) and Andy McMillan introduced their event by asking for trust. They promised to create the kind of conference they'd always wanted for attend — a conference for people who care about the internet. All 400 badges sold out in two days, largely to folks in their extended social circles. XOXO attendees were uniquely connected before the conference ever began.

I've known Andy Baio for a long time, and his vision for this thing promised to fill a void in my heart. Geeks, makers, bands, artists, video games and food trucks? Take my money.

"This is insane. This shouldn't exist," said Andy Baio during Friday's introduction. "There are no gatekeepers for this. It happened because of you." Both Andys were an unassuming, personal presence at the event, more camp counselors than conference organizers. They asked us to talk to each other and to make the event our own. The festival belonged to all of us.

Of all the threads in the snuggly hand-knitted scarf that was XOXO, three dominant themes jump out.

Everyone should make art

Over and over, the message of XOXO was clear: take a risk and make your thing, whatever it is. The old established systems are falling apart, and the sky's the limit.

For the conference schedule, the Andys avoided group panels, opting instead for two days worth of carefully-crafted solo talks peppered with a couple of interviews. And it's clear the speakers took it seriously.

Saturday was the artist's day. Archivist Jason Scott interviewed James Swirsky and Lisanne Pajot, praising the independent digital distribution approach they've taken with their documentary, Indie Game: The Movie. Singer / songwriter Julia Nunes walked through a step-by-step story of making her own luck by seizing opportunities, from the days toting her ukelele to awkward luaus, through building an audience on YouTube, to performances with Ben Folds and Weezer and on Conan. MetaFilter founder Matt Haughey shared twelve years of web projects, and outlined the challenges of turning them into small, sustainable businesses.

"Money became — like all young heroes do — an old villain." @danharmon at #xoxofest

In his hilarious Saturday keynote, Community creator Dan Harmon encouraged the crowd not to let the kind of greed that's common in Hollywood infect "our greatest people connector": the Internet.

The Sunday schedule focused on platforms. At an event powered by Kickstarter, the power of Kickstarter was an obvious running theme. Chad Dickerson chronicled Etsy's challenge to become a company that makes the world a better place. 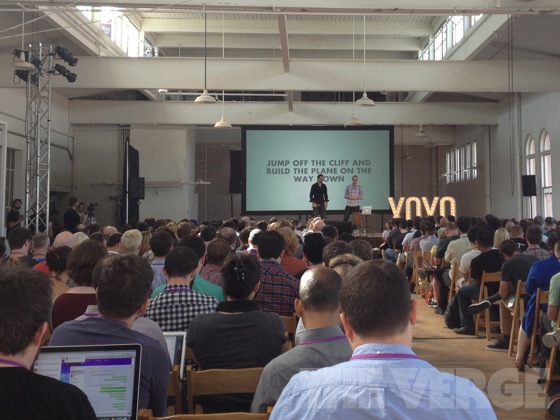 One presentation came from Josh Reich, of banking startup Simple. Instead of talking about the (rather impressive) UX of his beta product, Josh spoke about his own personal development as a hacker and creator, starting with his first computer and early days tinkering with fractals and later software. His talk was an implicit call to action to push against the systems around us and make the change we want to see. He was a true believer, and never once mentioned his company. XOXO was like that.

Every talk was worth watching. Until all the videos are available at xoxofest.com, check out Anil Dash's outstanding liveblogs.

Everyone took payments with Square — of course

The venues, market, music, food trucks and pub crawl all celebrated Portland's independent, DIY scene. The Andys passed on the convention centers and hosted the festival at the Yale Union Contemporary Art center, a building with remarkable character that was once an operating laundry. The YU building itself was decked out with giant wooden signs, fabricated by a local shop. They parked a surprisingly luxurious mobile bathroom (floor-to-ceiling stall privacy!) out back by the patio. People floated around the first floor, checking out handmade pillows and letterpress prints, drinking Stumptown Coffee Roasters coffee, and playing with the MakerBot. The food trucks were convenient and delicious. Everyone took payments with Square. Of course. 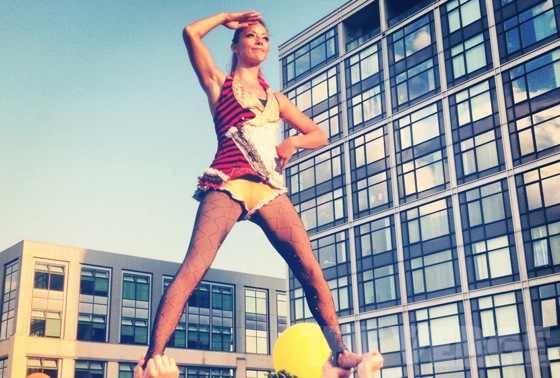 Every hour through the evening was a different Portlandia sketch. At Friday's opening party on the Weiden+Kennedy roof, I stood chatting with new friends, eating a spicy Thai PB&J, drinking a "Whiskey Tamer" out of a Ball jar through a jaunty paper straw while acrobats performed to circus music in the sunny rain. Then the lovely Willo O'Brien appeared and showed off her locally-sourced laser-cut felt earrings. This actually happened, and we all actually giggled.

We drank beer at the retro arcade Ground Kontrol, and danced to MC Frontalot and The Kleptones at Holocene. At Union Pine, where I found myself banging a plastic hammer on some kind of illuminated real-world Minecraft block (this was a game, and I think I was losing), I realized something: all 400 of us were bouncing through the fun, obsessive corners of Andy Baio's mind, some kind of wonderful sugary 8-bit fantasy.

Long time fans of Waxy.org will know what I mean. On Saturday, as I munched free popcorn and Dan Harmon answered questions about unaired pilot "Heat Vision and Jack" (starring Jack Black as a smartest man in the world and Owen Wilson as the voice of his motorcycle), I half-expected the Star Wars Kid and Afro Ninja to emerge and take everyone out for Boba tea, supercuts and cookies, Andy Kaufmann-style. There was geek magic in the air.

I'm quite positive that I had more conversations with strangers during my four days in Portland than I've had cumulatively during the past four years of my life. The attendee list reads like a Who's Who of internet past and future.

"Banter? Are we bantering now?"

With their thoughtful intros and unplanned stage chatter, ("Banter? Are we bantering now?"), the Andys set an intimate tone of openness and generosity that was contagious. Nearly everyone kept their laptops closed during presentations. I saw folks helping by cleaning up random trash. Since the daytime schedule included plenty of breaks, and everything (including food trucks) was spread right around the YU building, casual encounters were constant. And the intrinsic connections between people had everyone ready to talk. 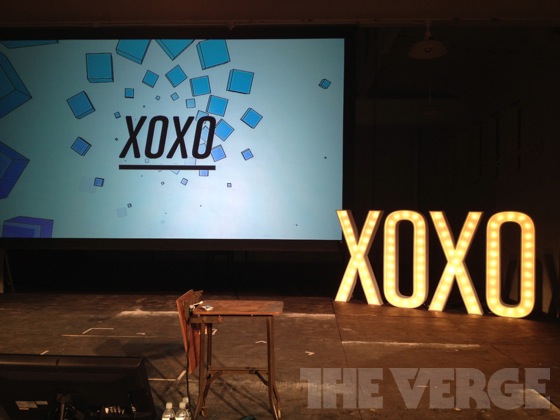 The connections also meant trust was in the air. At some point on Sunday afternoon the guys selling Cards Against Humanity abandoned their table downstairs in the XOXO Market area to check out Mythbuster Adam Savage. They left an envelope for cash and an iPad with a Square reader sticking out alongside stack of their games, and went upstairs. This was a perfectly reasonable thing to do at XOXO.

There were a few minor problems, of course. The shuttle to the hotel seemed unreliable, and the chairs were a bit uncomfortable. When it got hot upstairs, the organizers set a big tub of water bottles in the aisle. But no one complained. As Chris Poole (better known as moot from 4chan) said during his Sunday presentation, systems with rough edges often result in more compelling experience; he'll take drive-in movies and 4chan over IMAX and Facebook any day.

After the closing party on Sunday night, a few of us sat in the lobby of the Westin and tried to digest what we'd experienced.

I feel like crying. Shaking a little. This is better than we’d hoped and dreamed, because of YOU. #xoxofest

Should XOXO happen yearly, or never again? Should current attendees have first dibs on future festivals, or be discouraged from returning to make room for new people and ideas? My friend Leonard Lin imagined an OLPC model, where those who can afford to attend help pay the way for new makers, to ensure that the next Julia Nunes or Super Meat Boy can have a better chance to blossom. I might like to see more hands-on activities, more attendee diversity, and more Q&A sessions. These are standard questions for exciting new events: How do you keep the energy going? How do you reach more people?

But maybe the usual questions miss the point of XOXO. You go to summer camp to see old friends, to make new ones, and —if you're in Portland — to eat locally sourced, organic s'mores. Summer camp isn't supposed to scale, and you don't always come away with merit badges or a clear plan of action. But you re-energize the best part of yourself. You share ideas, stay up late, find a new crush, eat pizza or poutine, and laugh. You depart PDX inspired, with a head full of ideas, a belly full of tacos, and a heart full of Twitter handles.

XOXO wasn't really a conference. It was a face-to-face reminder of what's possible, a Sex Pistols gig of legend for modern creative geeks to run with. That's the internet we should all live in.

Ryan Gantz is director of user experience for Vox Media and The Verge.
Photo support from Warren Schultheis.