StackExchange has teamed up with the U.S. Patent office to create a community for discussing prior art. It's part of a push to improve a software patent industry plagued by trolls and lawsuits.

Share All sharing options for: Stack Exchange and Google partner with US government to battle bogus patents

The tech industry has been plagued over the last decade with an explosion of patent trolls who collect very broad patents and use them to sue corporations and startups alike. The recent American Invents Act sought to remedy this by opening up the process, giving everyone access to recently-filed patents and a six-month period to respond with prior art that would invalidate the new patents under consideration by proving them to be full of obvious and existing ideas.

The U.S. Patent and Trademark Office (USTPO) realized that if this new process was going to work, it needed help from some savvy tech firms. So it reached out to Stack Exchange, a "There are probably hundreds of patent applications every week that aren't true inventions."New York startup which has built some of the most robust question & answer sites on the web, especially around subjects like programming and computer science. Stack Exchange is building a new community, Ask Patents, where patent officers and interested parties can exchange information.

"The escalation of the patent wars has lead companies to try to patent everything in sight, so they can build up a portfolio of patents to "defend themselves." And the imperative to get a lot of patents means that sometimes they submit things which aren't exactly inventions per se," said StackExchange co-founder Joel Spolsky. "When I started looking at this project, I thought finding prior art would be tricky, but the truth is, there are probably hundreds of patent applications every week that aren't true inventions."

The community site will be tied in with Google's Patent Search, which last month added a prior art function. When searching for prior art around a specific patent, users will now see a "discuss" button which links to Stack Exchange's Ask Patent's site, where they can go to debate whether a certain patent is worth contending. There will be direct links from Ask Patents to the USPTO's submittal engine, along with instructions on how to proceed, and links from each discussion will pull in relevant information from Google's archive of patent data.

The USPTO had tried a limited form of crowdsourcing before, but it was only open to a few hundred users. The results were encouraging, explained Alex Miller, the general manager at Stack Exchange. "While small, it proved that crowdsourcing prior art could work and now we're opening it up to everyone." 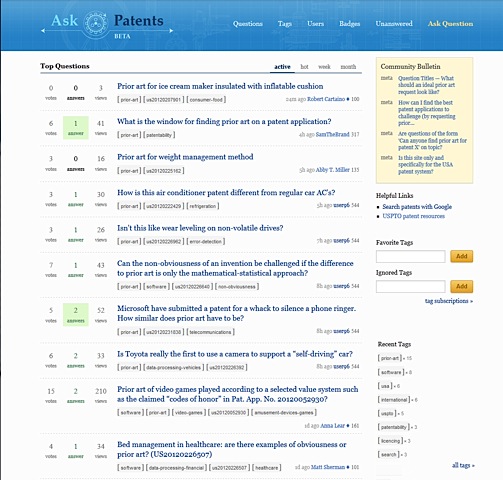