A new feature in the iOS 6 Betas, called Wi-Fi + Cellular, was like a personal gift to me, waiting to be unwrapped. It's as if Apple had said, "Yes, we use iPhones too and we also run into this very problem."

Imagine you're just got in your car and are pulling out of your driveway. You ask Siri for directions, only now you're at the end of your driveway and your home Wi-Fi connection is down to one bar. It struggles for far too long as you drive away. It's still trying to download information off of your Wi-Fi router. It's not until it finally gives up and switches you over to Cellular Data that it looks up your information. Well that's where the Wi-Fi + Cellular feature comes in. 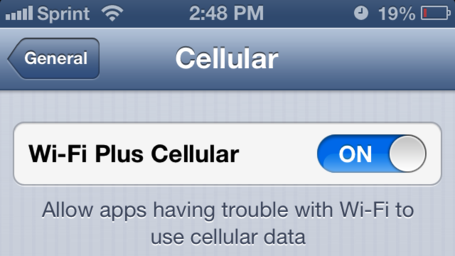 With such a feature, iOS would recognize the Wi-Fi struggle and instantly download the information from your cellular 3G/4G data connection instead. Now that's smart! Would also be very handy if your router was having troubles, and even though you might be right next to it, your internet connection would just fail to do anything.

But if you've downloaded iOS 6, you can go to Settings > General > Cellular and see that the option has been removed in the final build. I wonder why they decided to pull such a great feature that I was so excited about? Haven't seen any tech sites covering this either.