The major new feature of the company's new iOS 6 mobile operating system is a new mapping module developed by Apple itself — a replacement for the Google-supplied maps that have been standard on the iPhone since it debuted in 2007. It is a change borne not of user demand, but of corporate politics: Google's Android platform is the biggest competitive threat to the iPhone, so Apple is cutting ties with Google. iPhone owners might have loved Google Maps, but Apple has no love for Google.

By Nilay Patel and Adi Robertson

Apple has a maps problem.

The major new feature of the company's new iOS 6 mobile operating system is a new mapping module developed by Apple itself — a replacement for the Google-supplied maps that have been standard on the iPhone since it debuted in 2007. It is a change borne not of user demand, but of corporate politics: Google's Android platform is the biggest competitive threat to the iPhone, so Apple is cutting ties with Google. iPhone owners might have loved Google Maps, but Apple has no love for Google.

"It's going to be messy for them."

Unfortunately, Apple's new maps are simply not as good as Google's. The release of iOS 6 yesterday was immediately followed by users complaining about the new maps, which lack a significant amount of detail and omit public transit directions. Access to high-quality maps is a critical feature for modern smartphones, and Apple's decision to swap out Google Maps is a rare example of the company openly placing its own interests above those of its customers. "There was no problem to solve," says Rene Ritchie, editor of iMore. "They're going to get hammered by mom and pop who want to find a store. It's going to be messy for them."

The problems are particularly bad outside of the US. Map detail might be lacking in some American cities, but London, Beijing, and Tokyo are virtually blank, and several major landmarks are labeled inaccurately or wildly misplaced. Satellite views are on par with Google in the US; internationally, they may well be obscured by clouds. "It's national news" in the UK, says Verge senior editor Tom Warren. Politicians have seized the controversy to puff themselves up: Ireland Minister for Justice Alan Shatter issued a statement saying he was concerned that a 35-acre garden and farm called Airfield in his district had been mislabeled with an airport icon. "Clearly the designation is not only wrong but is dangerously misleading," said Shatter. "I have arranged that Apple be informed of the error and requested that it be urgently corrected."

The Statue of Liberty? Gone. The Brooklyn Bridge? Obliterated.

Even Apple's highly-touted 3D "flyover" feature is somewhat broken: it frequently displays comically distorted images that look like major landmarks and structures have been destroyed. The Statue of Liberty? Gone. The Brooklyn Bridge? Obliterated. Twitter users quickly started collected examples using the hashtag #ios6apocalypse, and a Tumblr called The Amazing iOS 6 Maps quickly filled up with examples of bad data. Apple's 3D maps make for "a great commercial," says Ritchie. "But they're nowhere near as useful as Google's Street View."

To be fair, Apple's new maps are starting at a disadvantage with users: Google maps are the industry standard, and users are familiar with their quirks and limitations after years of use. Head-to-head, both Apple and Google's systems have similar issues: searching for a Lexington Avenue location while in Manhattan brings up a Brooklyn street in Apple's Maps, while Google first found a result in New Jersey. Searching for a specific restaurant or shop will usually work in either case — especially if a city name is also entered — and both maps do well when searching general terms like "Italian restaurant" in a well-populated area. When a search goes wrong, it's often equally wrong on both, even if the results are different. But Apple isn't doing itself any favors, either: a search for "Apple Cube" fails to find Apple's iconic Fifth Avenue store in New York. 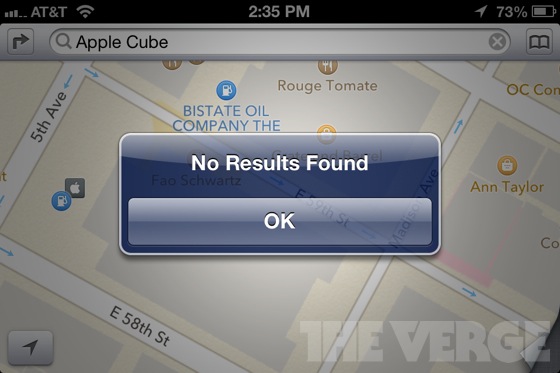 "It takes a long time and effort to figure out how to do this right."

Why all the bad data and broken features? Building maps is extremely difficult — there are only a handful of mapping data providers in the world, and they've all been gathering information for years. Sources tell The Verge that Apple began work on the iOS 6 maps system nearly five years ago — not coincidentally when Google launched Android — and the company has had to buy smaller mapping companies and piece together maps from several vendors to even get this far. That's why the US maps are better than the international ones: Apple's using TomTom data in the US, but other services abroad. It's a patchwork, and the rough edges are clear compared to Google's offering. The search giant has been refining its maps for years now: not only has it been running its quirky StreetView cars all over the world, it's been collecting location data from millions of iPhone and Android users to gain even more precision. Apple's just getting started.

"It takes a long time and effort to figure out how to do this right," Google maps VP Brandon McClendon told The New York Times yesterday. "Experience is important." Other companies of Apple's size aren't even trying: Amazon simply signed a deal to use Nokia maps on its Kindle Fire devices.

Apple's piecemeal approach to mapping is evident when simply browsing the map: instead of including locations directly on the map like Google, it uses an overlay of data from Yelp to show restaurants, gas stations, or bus stops. This is often beneficial: you can tap them directly to see Yelp ratings or head to a detailed address page. But Yelp is crowdsourced, and the results can seem random. In New York or DC, there's not a dramatic difference between Google's annotations and Apple's icons, but in many rural areas Apple seems to only place a handful of icons even when more are discoverable by searching, undermining its promise of a better browsing experience. And Yelp, popular mostly in the US, doesn't seem to have been replaced by similar tools in other countries.

The loss of mass transit directions is a major blow

And Apple simply didn't have time to match other Google features: the loss of mass transit directions is a major blow. Google Maps Senior Product Manager Manik Gupta told us that Transit "became an integral part [of Maps] very soon after it launched. It’s a very typical use case. Especially if you’re a city-dweller, living in Europe or Asia, where you have a very good Metro system... look at Tokyo. The whole city runs on transit." Selecting the familiar bus icon in iOS 6 when searching for directions now brings up a list of local transit apps that are either installed on the phone or available on the App Store. If the app is installed, Apple can feed it information, ideally minimizing the extra work. But while transit apps have come a long way over the past few years, they still can't replicate the fluid integration of bus, train, commuter rail, and foot traffic that Google offers at its best. And transit apps are often local to individual cities, meaning you may have to install multiple tools with multiple interfaces if you travel.

Apple's new maps do have some benefits — especially in larger American cities, where Apple's software can claim rough parity with Google's app. Apple maps don't have annoying features like sponsored listings and ads, and the company now offers free turn-by-turn navigation, a feature Google has long offered on Android phones. But those are benefits that only shine in the light of a great core maps experience, and most users appear to be willing to accept a few ads in return for solid, reliable data.

It is a precarious position for Apple, which is on the verge of an all-out media blitz when the iPhone 5 goes on sale tomorrow. Unlike years past, iOS 6 has few major features besides the swapped-in new maps — there's no headline-grabbing feature like Siri or multitasking or AirPlay. "Maps is a non-trivial effort," says iMore's Ritchie. "It took a lot of time that they could have used for user-facing features."

"iOS 6 is mostly about Apple — they wanted to get Google off their phone."

That means Apple won't have much else to lean on as it begins to market the new iPhone. "Maps is definitely the highlight feature of iOS 6," says Ross Rubin, principal analyst at Reticle Research. "We can expect the new maps to be a signature feature of Apple's new iPhone ads." It's also an interesting opportunity for Google: the company was widely expected to release its own maps app for iOS to coincide with the iPhone 5, but as of yet it has said and done nothing except quietly remind people that Google maps are still available and being updated on Android. 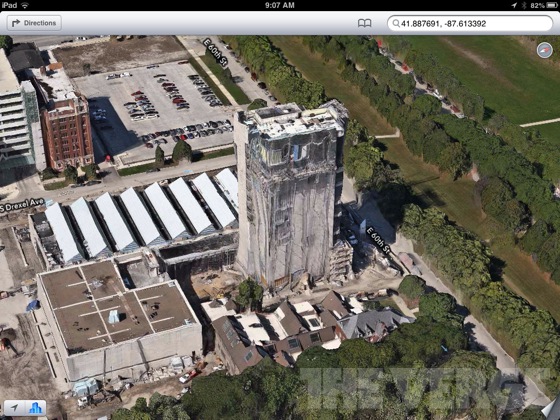 Ultimately Apple created this problem for itself. Ritchie is blunt in noting criticism that Apple's new iPhone 5 and OS feel like iterative updates to previous products. "iOS 6 is mostly about Apple — they wanted to get Google off their phone," he says. That's been accomplished: Google Maps and YouTube, beloved by users, are both gone from the default iPhone homescreen. The real question is whether these victories for Apple are victories for its customers.