With pre-processing and a new Smart Page feature, does Opera Mini 7.5 for Android provide a compelling reason to ditch Chrome?

When it comes to browsers, Android users have long been spoiled for choice — aside from the default, pre-installed Browser app, options include the ubiquitous Chrome, which left beta in late June, the popular Dolphin, which markets itself on the basis of added functionality such as gestures and text-to-speech, and the mobile version of Mozilla's Firefox. Opera Mini, which has recently seen the release of a major new 7.5 version for Android, aims to compete in this crowded market by offering something completely different, using pre-processing on Opera's servers to slash loading times. Does its latest iteration provide a compelling reason to switch?

Rightly or wrongly, Opera Mini will be associated in most users' minds with older smartphone operating systems on QWERTY devices, where it represented the peak of web functionality — the last time I used the browser was on Nokia's Symbian-powered E71. Unfortunately, the Android version could hardly be called "touch-optimized." Internal navigation in the browser is handled through a 3 x 3 main menu, which, while relatively easy to manage on a touch screen, was clearly designed for a D-Pad and keyboard. Away from the Start Page, where bookmark tiles can be rearranged relatively easily, drag-and-drop is completely absent, a lack most obvious when trying to use the browser's small tab organization window. 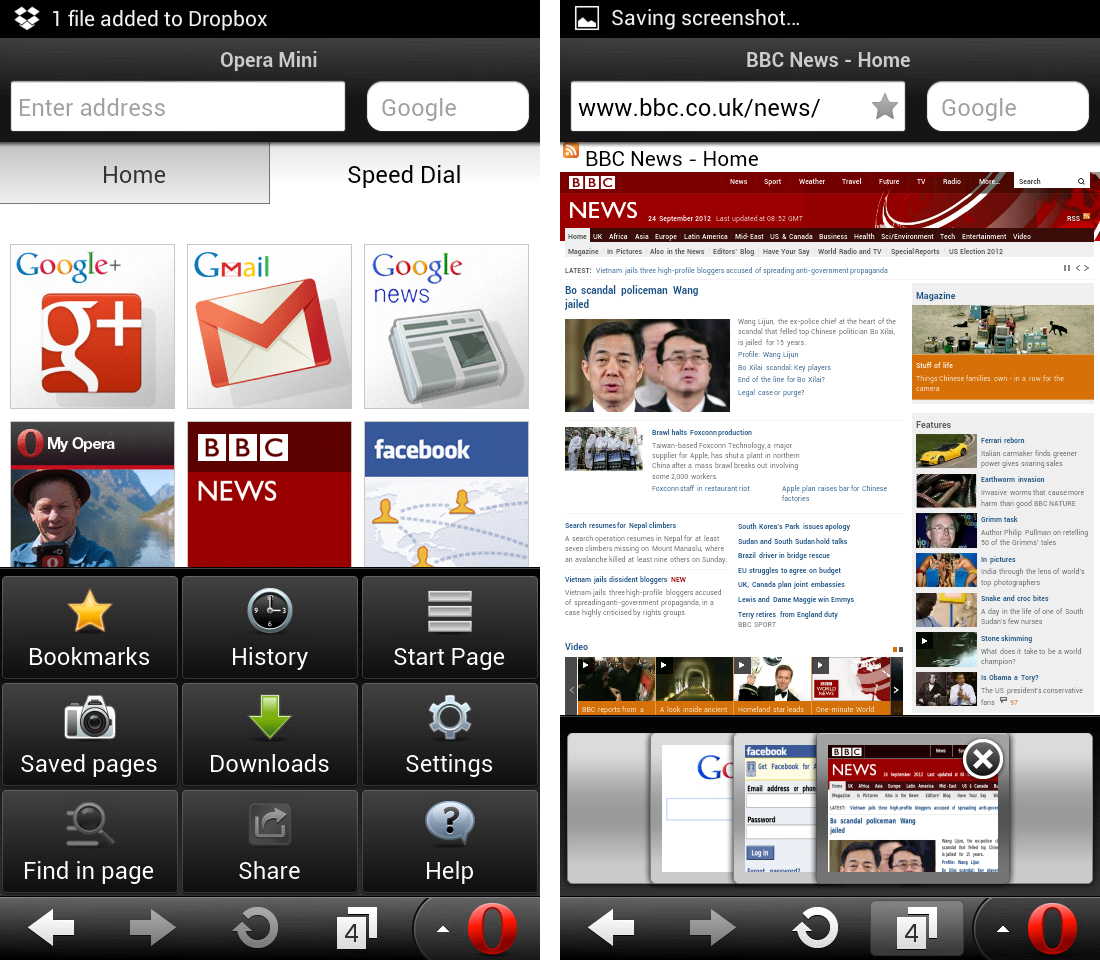 The headline feature of this latest Android release is Smart Page, an alternative to the familiar, nine-tile Speed Dial interface shown above. An ambitious concept, Smart Page provides a personalized jumping-off point for every user, displaying customized news stories based on data collected through the browser's pre-processing system, as well as social media activity pulled from Facebook and Twitter. In my short time using the app, I wasn't able to build up a particularly detailed profile, but the user interface was enough to put me off using the feature entirely.

The design and navigation can only be described as painful

Laying aside the fundamental question of why users would need this sort of social news start page on devices that are already socially-integrated to the hilt, the design and navigation can only be described as painful. To take one example, links and @mentions in tweets aren't independently clickable from the main page — what's more, when a user taps on an entire tweet, they are taken to Twitter's mobile site and forced to log in, despite having already authorized the browser to access the service's API. 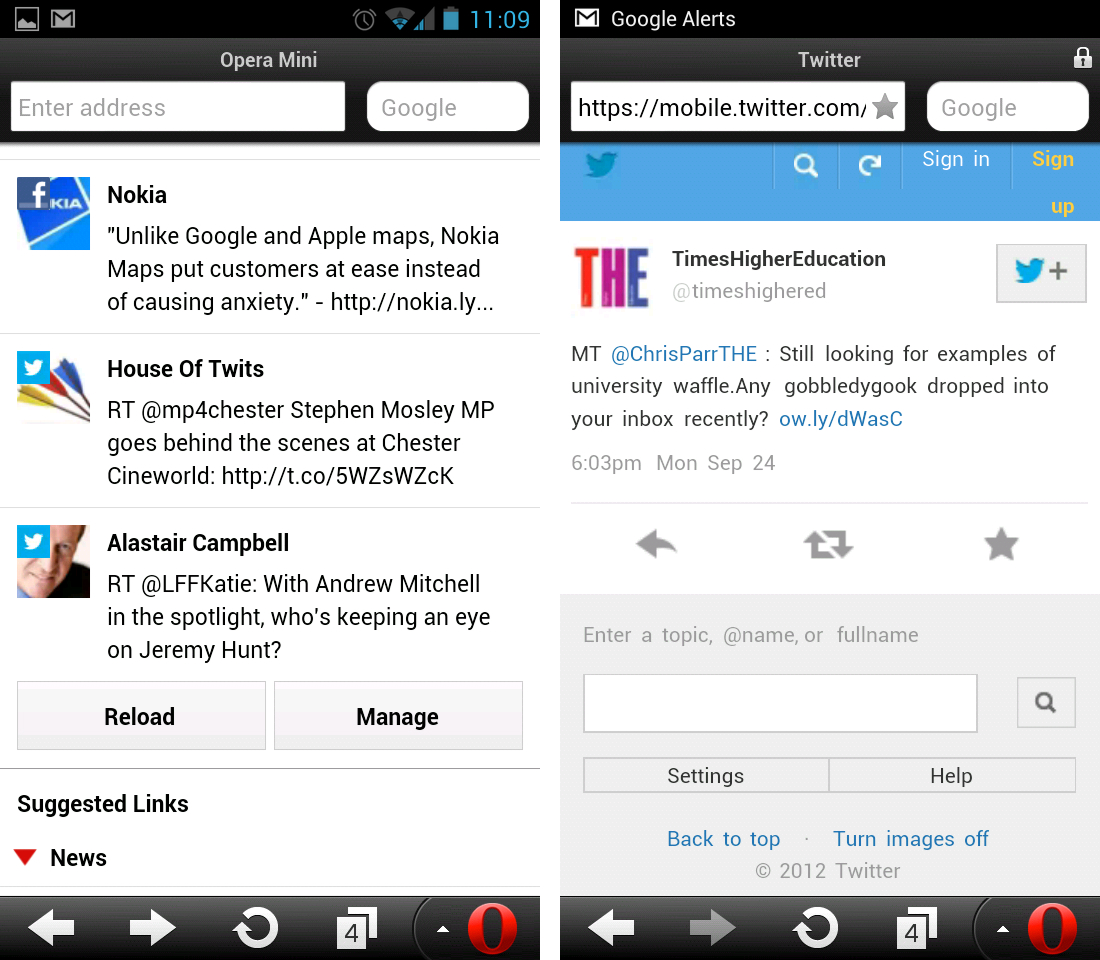 Perhaps the most damning aspect of Opera Mini for Android is its speed, or lack thereof. The browser uses the same pre-processing system as in other versions, similar to the architecture employed by Amazon's much-lauded Silk browser for the Kindle Fire. Still, for one reason or another, it doesn't provide any discernible boost over, say, Chrome — many sites actually take longer to load in Opera Mini. And while Opera's rendering and compression services no doubt help to squeeze down the size of graphics-heavy pages, expanding data allowances are making this sort of megabyte-pinching increasingly irrelevant, not to mention the fact that web browsing makes up a miniscule portion of most users' data usage when compared to things like music streaming, maps, and app downloads.

Opera Mini was, and is, a great browser for Symbian / S60, providing an interface far superior to the default option and offering the added benefits of reduced loading times and a smaller data bill — I'm sure the same goes for its BlackBerry version. If it hopes to compete as a proper browser on Android, however, it's going to need a much more comprehensive overhaul, something which is also true of its bigger brother Opera Mobile, which uses the same UI. As Silk has shown, pre-processing can work wonders on Google's system, but it needs to be combined with platform-specific optimization to ensure that both local and remote parts of the browser are working in sync. Sadly, Opera Mini isn't quite there yet.