At its Create the Web keynote, Adobe has announced a full suite of tools for building web content that will work on a range of browsers or devices. Adobe Edge includes Edge Animate, which allowed users to create cross-browser animated content with HTML5, CSS, and JavaScript. Animate was introduced last year, and now it's moving out of beta: it will sell for $499 up-front or $14.99 a month, though it's temporarily free. It's also included in the subscription-based Creative Cloud, along with other Edge products.

TechCrunch reports that Edge Animate will be joined by six other products, including Edge Reflow, a web-based tool to translate site graphics for PCs, tablets, and phones. Several of the other components are either existing apps — font library Typekit is one — or renamed products: the current Brackets code editor has been turned into Edge Code, and HTML preview tool Edge Inspect was built on the project codenamed "Shadow." It's also introducing Edge Web Fonts, a free online font database created with help from Google, and PhoneGap Build, for packaging mobile apps. Except for Reflow, all products are available to either buy or preview now; full pricing is below. 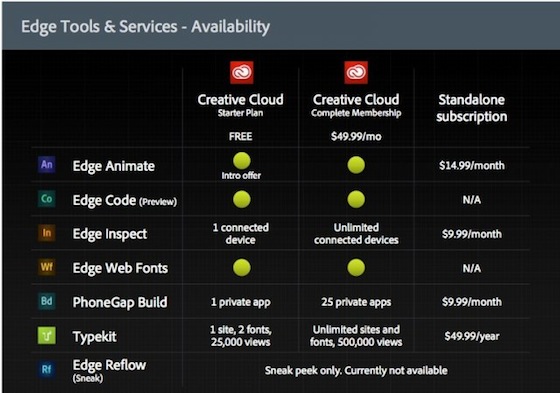