Eric Schmidt appeared in Tokyo today to show off the Nexus 7 to a Japanese audience for the first time. The tablet is available now from the Play store at ¥19,800 (about $254) for the 16GB model, and Google Play Books has also launched in Japan with a fairly solid selection of local content. Schmidt was quick to express his enthusiasm for the Japanese market, saying that it has the third highest number of Google Play installs worldwide and, at 75 percent, customers in Japan proportionally make more purchases on their devices than anywhere else. From October 2nd the Nexus 7 will also be available at major Japanese retailers such as Bic Camera, Yodobashi Camera, and Joshin — likely an essential move for any success in the country.

Japan is a potentially huge market for Google

The move continues Google's effort to expand beyond its home base of the United States, following a recent push into Europe. This is an area where Apple thrives and Amazon consistently stumbles, with seemingly no-one able to match Cupertino's global reach. Japan is a potentially huge market for Google and Play Books in particular, with a large, affluent population that has so far proven difficult to crack in terms of ebooks. Amazon has announced plans to launch Kindle products in Japan, but they have so far failed to materialize, and the most credible competitor to date is Rakuten's recently-launched Kobo Touch. 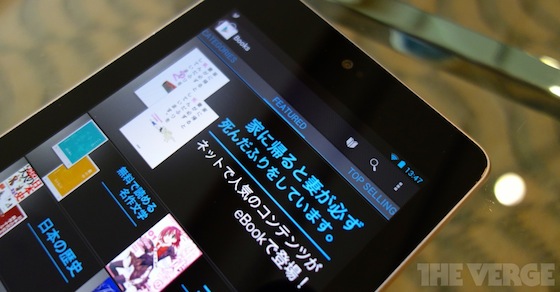 Surprisingly, in launching Play Books in Japan Google has even managed to beat out Apple, whose Japanese iBookstore remains a public domain wasteland over two years after opening. The Nexus 7 is a strong product at an undeniably attractive price point and, coupled with a library of Japanese-language content, could well catch Apple by surprise. Japan's fragmented publishing houses are notoriously conservative and make it difficult to secure rights deals, but from all appearances Apple hasn't even made the effort. While literary giants such as Haruki Murakami are predictably absent from Play Books for now, Google's selection could well expand if the Nexus 7 succeeds — not to mention Play Books on the countless Android devices already out there in Japan.

Google isn't as ubiquitous here as it is elsewhere

That said, Google will have its share of challenges. Android phones are popular in Japan, but as a brand Google isn't as able to rely on its ubiquitous status as it is elsewhere. Japan is one of the few countries in the world where Google isn't the number one search engine, with Yahoo Japan (a SoftBank-owned separate company to the US Yahoo) having held the top spot for several years. The Galaxy Nexus, for example, failed to make much impact here despite a prominent "Pure Google" advertising campaign and a release on leading carrier NTT Docomo. Google may have entered the Japanese market with a splash, but it remains to be seen if there will be any lasting waves.