Why is Verizon's iPhone 5 unlocked? Don't thank Google or the FCC

Even if the special rules on Verizon's LTE spectrum are enforceable, Big Red has little incentive to care

Share All sharing options for: Why is Verizon's iPhone 5 unlocked? Don't thank Google or the FCC

As the largest wireless provider in the United States, Verizon isn't exactly known for championing the principles of an "open" network — look no further than a long line of bootloader-locked Android phones (occasionally accompanied by no-subsidy "developer" models) to underscore that fact.

So when speculation arose this week that Verizon's GSM-unlocked iPhone 5 was forced by FCC rules surrounding the 700MHz spectrum that it uses for its LTE service, the notion made sense: by all accounts, allowing subscribers to use the phone with any GSM carrier in the world is not something that Verizon would encourage of its own accord. Verizon, like other American carriers, has agreements in place with specific operators worldwide that lock its subscribers into profitable global roaming plans; customers in good standing can typically call to have their phones fully unlocked after some period of time.

The specific spectrum that Verizon uses for LTE — the 700MHz "C Block," the largest and most lucrative of five blocks in the 700MHz range auctioned in 2008 — is well-known for the special rules that the FCC promised to attach if it hit its reserve auction price of $4.64 billion. In theory, the rules were intended to usher in a new era of openness in cellular by requiring that any compatible device or application be permitted to connect to it unless such use "would not be compliant with published technical standards reasonably necessary for the management or protection of the licensee's network." At the time, the rules — seen as a big win for consumers — were celebrated by virtually everyone outside of the traditional cellular providers actually bidding on the spectrum, and Google famously bid it up beyond the reserve price to make sure the rules would go into effect.

The reality has barely moved the "open" needle, however. Because the rules only apply to a single block of spectrum in a complicated mishmash of bands (and blocks within bands) employed by Verizon and other US carriers, its potency as an enforceable policy has often been called into question. One small victory came recently when the FCC levied a very small fine over Verizon's blockage of tethering apps in the Android Market, but the ruling was little more than symbolic: by the time it occurred, Verizon had already stopped charging for tethering and no longer had a vested interest in blocking the apps.

Another section of the C Block's open access provision effectively specifies that Verizon-branded handsets using it can't be locked:

It all depends on how you read the rules

This is where we enter uncharted territory — this particular rule has never been enforced, challenged, or questioned in practice. Do these handsets only need to be carrier-unlocked on the C Block, or do they need to be completely unlocked across every band they support? "If you assume a strict reading of the rules, then GSM has to be unlocked along with everything else. If you assume a loose interpretation of the rules, then GSM doesn't need to be unlocked since it's not C Block," says Public Knowledge's John Bergmayer, who advocates for the strict interpretation. "Let's say a device only used the C Block for sports scores. Sorry carrier, I'd say, the device has to be completely unlocked." 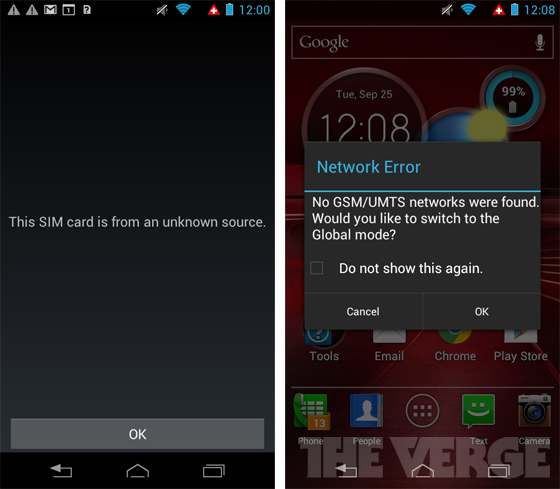 But even if that's the interpretation that ultimately won out in the inevitable drawn-out court battle, does Verizon care right this second? iPhone 5 aside, we tested a Droid RAZR M (which can roam on GSM networks) with an AT&T SIM and found that it didn't accept it. Regardless, the phone is bootloader-locked in its standard version, which would seem to fly in the face of the spectrum's requirement that customers be allowed to "use the devices and applications of their choice." And the miniscule FCC fine over the tethering apps — an investigation that lasted over a year — suggests that Verizon has little to fear, even if it's in violation of the letter of the law.

So the question remains: if Verizon isn't being compelled by a healthy fear of the FCC, why is its iPhone 5 unlocked? "They're not going to lose anyone to AT&T," notes The Verge's Nilay Patel. "I think Verizon just doesn't [care]." And without consistent government enforcement of what was once seen as groundbreaking regulation, it's hard to see what might make them care in the future.