FCC chairman says we need faster internet sooner, defends role as a 'cop on the beat'

FCC chairman says we need faster internet sooner, defends role as a 'cop on the beat'

In a policy speech given today at Vox Media's headquarters in Washington, DC, FCC chairman Julius Genachowski reiterated the agency's vision for broadband in the United States, and defended its role in preserving and promoting free markets. The chairman's message is a familiar one: he's been pushing the Commission's National Broadband Plan for some time, which aims to bring fast and affordable internet to all Americans. Genachowski says that while the US has come a long way in recent years to deploy fast and affordable broadband, the country faces real challenges in meeting its goals and staying competitive globally. So the question remains: how will the FCC take action on its well-known plans?

"These are the kind of challenges America wants to have."

In his remarks, Genachowski highlighted the need for "capacity, ubiquity," and "speed" in broadband markets, emphasizing their effects on innovation and the role of the US as an international leader — but he says there's still work to be done in keeping the US competitive. "Challenges to US leadership are real," he says, and "some of these challenges are a consequence of our own success." Genachowski says that innovations in recent years have caused demand for broadband services to explode, putting pressure on internet infrastructure (yes, the FCC believes in the oft-cited spectrum crunch). But the FCC chairman believes the stakes are high: he says "broadband is a ticket to economic success," and that like with the 20th century space race, success in the race to deploy high-quality broadband service "will go a long way to determining who leads in this century."

"We need to get faster, sooner."

Despite the challenges, by the FCC's metrics, the US is already ahead in many areas. Genachowski says that the US has emerged from the shadows of Asian and European broadband innovation to become a "testbed" for global 4G LTE services, and innovative high-speed services like Google Fiber. In fact, the FCC chairman mentioned Google Fiber repeatedly, highlighting the "positive developments" coming out of Kansas City from Google. And he pushed for the creation of more "innovation hubs," which he defines as areas in the US with ultra-fast broadband: "speed measured in gigabits, not megabits." But Kansas City isn't enough — Genachowski says that we need "a critical mass of communities that have the most robust bandwidth."

So how can we get there? Well, that really depends on who you ask. Companies like AT&T and Verizon, along with some members of Congress, will tell you that the FCC has too much power and interferes in the marketplace with regulation. But Genachowski is, unsurprisingly, bullish on the FCC's role in the broadband market. He says that we "must drive massive private investment in networks and applications," and that ultimately the FCC's role is like "a cop on the beat" in the broadband industry. "Some say government has no role to play here, that government should just eliminate existing rules and policies." But, he says, "we don't have to choose between having broadband policies that drive global leadership and leading a free market — it's a false choice." 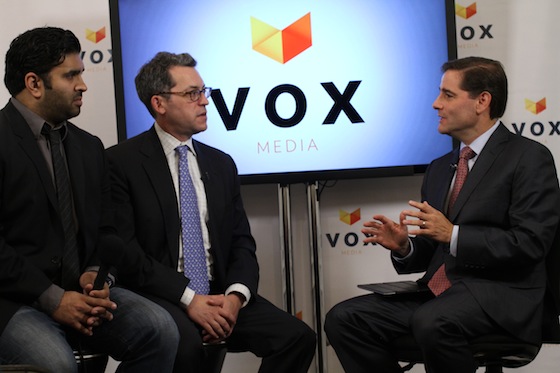 "Government has a role to play, limited but vital. Light touch, not no touch."

Genachowski says that there are three key areas in which the FCC needs to act: to drive improvements in broadband infrastructure and accessibility, to lower the cost of building out that infrastructure, and to deploy more spectrum fairly and effectively. "We need to protect and promote competition," he says, and "when it comes to competition in the communications sector, the FCC needs to be a cop on the beat." He says the FCC has an obligation "to consider all options," and to "vigorously enforce conditions on transactions so companies can't flout their obligations."

While the FCC's chief was generally upbeat about the country's prospects in the broadband sector today, the agency has some serious decisions to make ahead — especially in the realm of its Open Internet rules, which have come under fire from both sides of the political spectrum either for being too weak or too meddlesome in a free market. And in the meantime, companies like AT&T, Verizon, and Comcast are testing the bounds of those rules with controversial measures that appear to undermine them. Our challenges in broadband may be a result of success, but by the FCC's own admission, that success won't last forever if it doesn't take action now.