During the iPhone 5 announcement keynote, Apple demoed a few apps like CNN and OpenTable that had been redesigned for the device's larger 4-inch screen. OpenTable added a image carousel, and CNN has "more space to present its stories," Apple SVP Phil Schiller said. "They don't want to just make it bigger," he added, but that's exactly what most developers have done thus far. Since the iPhone 5 launched last Friday, thousands of apps have been updated to take advantage of its larger screen. In the interest of time, most developers have simply expanded their apps' midsections and left everything else the same.

Is a "taller" app a better app?

"Simply extending the screen for Djay would have been bit of a cop-out," Algoriddim CEO Karim Morsy says. "We've actually added functionality and re-filled out the interface." Landscape-oriented apps like Djay require a bit more work, since its buttons, sliders, and dials were packed with pixel-perfect detail to fit into the iPhone's 3.5-inch screen. Algoriddim's new version of Djay, launching today, finally lets you see both of your decks, along with BPM sliders and Sync buttons onscreen at one time. "It changes everything," Morsy says, "because you can really perform with the app now." Until today, these features were hidden inside a menu since there wasn't enough room onscreen. "The challenge was the design and making sure we utilized the extra space efficiently while providing functionality," Morsy says. 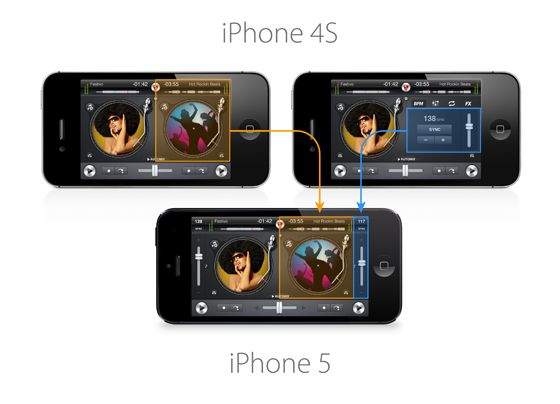 Algoriddim went a step further and implemented multi-route audio, an iOS 6 feature nobody else has taken advantage of yet. Multi-route audio allows your iPhone to output two separate stereo channels: one through the dock connector, and another through the headphone jack. This means DJs can now preview one track through headphones while playing the other track through a set of speakers, which until now required an adapter and only worked in mono.

To Algoriddim, the device's hardware is worth a lot more than a bigger screen. Apple demoed Djay during its iPad 2 announcement, and perhaps should've done it again at its iPhone 5 event — because so far, Djay is the only app we've seen to truly create a better (and much more useful) experience for users that's only possible with new software and a larger screen.