This Halloween, a company you've probably never heard of will begin selling a product that sounds positively mad: a $499 Android 4.1 tablet with a detachable game controller. It's called the Wikipad. When you can buy the latest Apple iPad for the same price and a competent Android tablet like the Nexus 7 can be had for less than half the cash, it's easy to dismiss a new competitor out of hand. Today, however, we got to try the Wikipad for ourselves, and I have to admit it has a surprising amount of potential.

Sure, that Nexus 7 has a capable Tegra 3 processor, but how do you plan to play serious games on its 7-inch screen? Even if your thumbs are dexterous enough to work the capacitive touchscreen, you'll be blocking part of the image with your hands. You could buy a wireless Bluetooth controller for the device, but you'd be dealing with a little bit of latency, and more importantly, you'd need to have a convenient surface and a ready stand to prop up your tablet at a distance. What Wikipad promises for $499 is a large 10-inch screen you can hold right in front of your face and intuitively control with your hands, thanks to a surprisingly lightweight tablet that balances perfectly inside of a (included) game controller frame with an Xbox 360-like gamepad layout.

In order to achieve a weight of under 560 grams, both parts are made primarily of plastic, but they feel surprisingly well designed in spite (or perhaps because) of that. I was immediately impressed with how comfortable the controller attachment felt in my hands, the soft-touch rubber surfaces carefully sculpted to fit, and all the controls laid out within easy reach of my thumbs and index fingertips. There's also a square-shaped ridge that oddly sticks out of the back of the tablet, but it's actually a rather ingenious design.

First, the ridges act like rails to align the tablet with the controller dock, and firmly snap it into place with a locking mechanism. Second, they act as fingertip grips, so you can hold the Wikipad with a single hand at any position around the bezel, and not worry about dropping it to the ground because of the extra purchase. Lastly, when you set the Wikipad on a flat surface, they give the tablet's stereo speakers room to bounce off that surface and neatly amplify the sound. I can attest to the improved results. The controller also pipes that sound through chambers in the attachment to direct the sound out front. 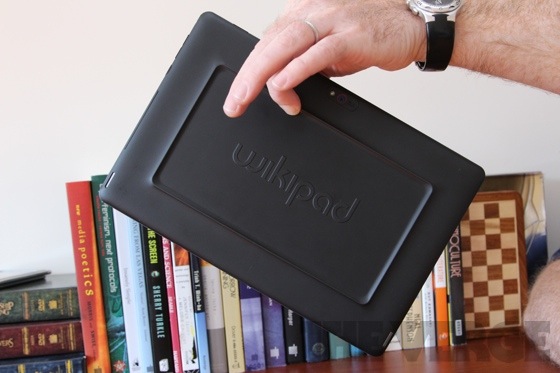 Otherwise, the tablet has some fairly standard specs for the price, including a 1.4GHz Tegra 3 chip, 1GB of DDR2 RAM and 16GB of storage, but there's also a microSD slot for expansion, twin cameras including an 8 megapixel shooter around back, and a space for an optional cellular radio if you want to tack the Wikipad onto your mobile data plan.

The company's utility-first approach means that the Wikipad isn't the prettiest device in the world (though the 1280 x 800 IPS screen isn't bad), and the hand-built prototype samples we tried weren't without their flaws. The tablet was literally a little rough around the edges, and seams were visible on both. The shoulder buttons and triggers don't yet have the final mechanisms and rubber stoppers inside to give them that solid, responsive pull, the directional pad has a pretty short range of motion (about the same as an original Xbox 360 controller) and the right joystick seemed to have a touch too much initial resistance. 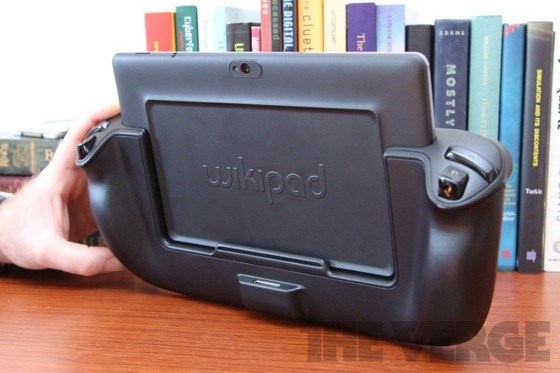 Fraser Townsley, president of sales, told me that the final product will have these things right for launch, with a larger ball under the D-pad, as well as a chrome finish on the buttons. If a gamepad alone isn't enticing, though, the company's also planning to eventually release a docking station with HDMI, USB and power, as well as a Transformer-like keyboard assembly to turn the tablet into a makeshift laptop. 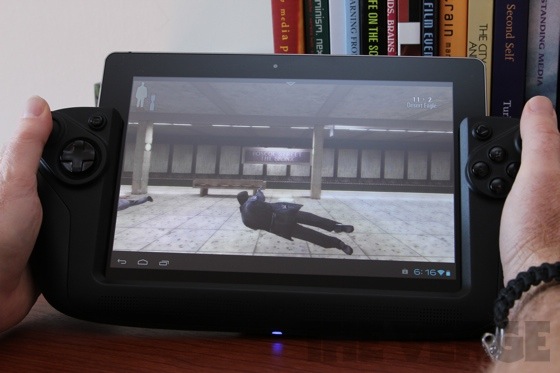 Whether the Wikipad gets a following depends more on software than hardware, though. With the right games, it's a huge improvement: titles like Dead Trigger and Max Payne are a bear to play on a touchscreen, but with the responsive Wikipad controls, it feels more like a portable Xbox. Getting an Xbox's worth of content won't be easy, though. Right now, Wikipad's approach is to put controller-friendly titles suggested by retail partner GameStop, Sony's PlayStation Mobile, Nvidia's Tegra Zone and Google Play into a custom launcher with fancy 3D effects that runs on top of Android 4.1, and that automatically updates lists of suggested games whenever the tablet connects to the internet. 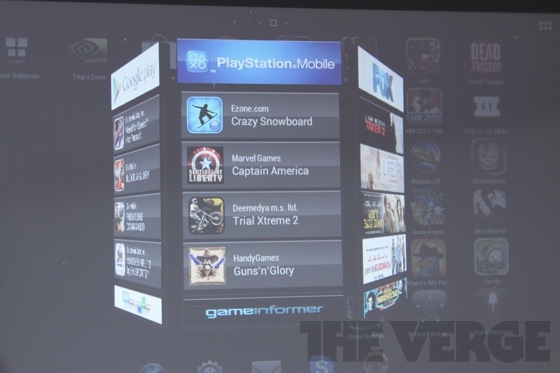 It's a neat trick, but convincing developers to build games that work well with controllers might be hard, considering that mobile gaming, driven by Apple's iOS ecosystem, is so touchscreen-centric right now. The more interesting possibility is that we'll all be playing bona fide console games through our tablets anyhow — thanks to cloud gaming services like Gaikai, which got bought by Sony back in July. Wikipad says that Sony's cloud gaming service will run on the device, but can't share any kind of timeframe for when it might be ready for use.

If tablets with game controllers become a trend, and it seems they might, Wikipad might have a good one ahead of most anyone else. If not, the Wikipad will quickly be forgotten... like a certain PlayStation Phone.