The megapixel wars are over, but a new battle's just beginning

Much has been made of the death of the point-and-shoot camera, obviated by the ubiquity and improving imaging power of the smartphone. At Photokina 2012, there was evidence of that everywhere: only a few entry-level cameras were even announced, and all were afterthoughts displayed off in a remote corner of the companies' giant booths. Some of them even ran Android, if the inspiration wasn't already clear enough.

But the rise of the cameraphone has impacted more than just cheap cameras. It's forced manufacturers to make the case for every product it makes, to convince consumers why it's so much better than a smartphone that it's worth your money. Manufacturers have also turned their attention upward, to products with obvious advantages over your cellphone. "The DSLR is becoming much more important for people," said Nikon Product Manager Sander Van Velzen. "The market is growing, and we have a lot of enthusiasts… they want to step up, they want to make even better pictures." In today's market, if you're buying a camera you expect a huge upgrade in quality over the devices you already carry, and you want it for a price you can afford. Those two things — affordability and quality — have long been diametrically opposed, but at this year's Photokina in Cologne, Germany, they're coming together inside a series of small, affordable, decidedly consumer-friendly full-frame cameras.

The bigger the sensor, the better the picture

Full-frame sensors are one of the key indicators of image quality. In simple terms, larger sensors mean better pictures, and full-frame is as big as it gets for a consumer-level device. Full-frame is so called because it matches the "full frame" of 35mm film, meaning you can see and capture the entire picture instead of dealing with crop factors. Full-frame sensors offer huge improvements in depth of field and low-light performance, and allow you to shoot wider angles.

"From an image quality point of view," says Canon Marketing Director Steve Marshall, "the larger the sensor, the larger the pixels, so the less the signal to noise ratio, which allows better performance in low light." Nearly everyone we spoke to — from NIkon, Canon, Sony, and others — agreed that full-frame sensors are an unmitigated improvement over APS-C, DX, and every other sensor format below. At least in this case, bigger is inarguably better.

But with big silicon comes big prices: full-frame cameras have always been effectively professional-only, with even the cheapest new models costing $3,000 or more. They've also always been big and cumbersome, to give pros the controls and features needed in a high-end camera. 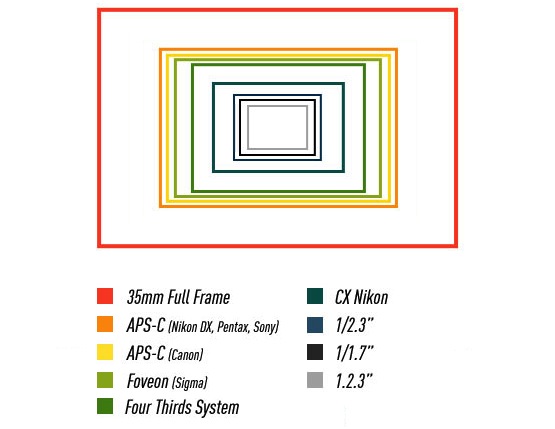 At this year's Photokina, however, full-frame found a new market. For the first time, manufacturers proved that full-frame cameras don't have to be huge, and they don't have to be prohibitively expensive. Nikon and Canon released full-frame DSLRs within four days of each other — Nikon's D600 came out just before Canon's EOS 6D — and both came with the same $2,100 price point. That price may still be out of reach for most amateur and budding photographers, but these full-frame models now occupy a price that only smaller sensors had seen before.

Sony and Leica's new full-frame models are far from affordable, but they prove something else: a high-end, full-frame camera doesn't have to be big and ugly. It can be pocket-sized and incredibly beautiful. Leica's gorgeous new rangefinder, dubbed simply "M," fits its full-frame sensor into a body closer in size to a mirrorless camera than a DSLR. The company does have a bit of a head start in these matters, since it was the first to use 35mm sizes in its cameras, but its sensor size to body size ratio has long been unmatched. Until Sony launched the Cyber-shot RX1, anyway, which makes Leica's beauty look giant and unwieldy. That the RX1 is technically a Cyber-shot is fitting: the camera looks and operates more like a point-and-shoot than any other full-frame camera we've ever seen, even if its $2,800 price tag does still scream "professional."

Canon's Marshall says the new products are just a function of progress. "It's a bit of a natural evolution with technological development," he said. "You could draw comparisons with computers and CPUs — you have the performance of last year's professional product, in this year's consumer product."

The full-frame battle is just beginning

Full-frame is now less expensive than ever, though calling it "affordable" might still be a stretch. But now that Sony, Canon, and Nikon have proved that the format's previous restrictions don't really apply anymore, how far can we go? When we asked reps from each company, what we heard back was a chorus of "no comment" and "we don't comment on future products." The implication as we spoke, however, was that there's no telling how small or how cheap full-frame cameras will get. Sensors are getting cheaper, manufacturing is getting better, and the demand for something cheap that's meaningfully better than your cellphone is growing louder and louder.

Will we ever see a small, cheap, full-frame point and shoot? No one would rule it out, though no one would tell us it's coming, either. But if and when it does happen, point-and-shoot cameras are going to make quite the comeback. At least until your smartphone goes full-frame, anyway.