Barnes & Noble fires back at Amazon with new Nook HD and HD+ tablets, starting at $199

Barnes & Noble fires back at Amazon with new Nook HD and HD+ tablets, starting at $199

Back and forth, back and forth. So Amazon and Barnes & Noble have gone, in an endless game of one-upmanship over the last few Kindle- and Nook-filled years. That's why when Amazon announced the Kindle Fire HD, the clock started ticking toward its rival's inevitable retaliation. And retaliate it has, as Barnes & Noble announced today two new tablets aimed head-on at the two Kindle Fire HD models: the Nook HD and HD+.

The 7-inch Nook HD is aimed primarily at readers, while the HD+ is a 9-inch device intended more for shared, home use. In both cases, reps were full of superlatives for the devices, and evidence to back them up. When they bragged about the Nook HD being the "lightest 7-inch tablet on the market," reps produced a Nexus 7 and a Kindle Fire HD for comparison. (At 11.1 ounces, it's very light.)

Comparisons to Google and Amazon's devices abounded — the Nook HD's 1440 x 900 display is higher-resolution than either, and Barnes & Noble claims the display is better laminated to the glass as well. The HD+ bumps the resolution up to 1920 x 1080 1280 on its 9-inch screen — reps brought an iPad along for comparison — and also looks fantastic.

It's not about library size anymore — it's a spec battle

Rather than tout its ecosystem or retail reach, Barnes & Noble gave us a surprisingly technical demo of the new devices. In addition to the high-res displays ("pixel density" was the phrase of the day), there's a new dual-core OMAP 4470 processor inside both devices (clocked at 1.3GHz on the HD and 1.5GHz on the HD+), plus 1GB of RAM. Both devices advertise over 10 hours of reading on a charge, or nine hours of video. They each have soft-touch backs and good-sized plastic bezels, which are intended as a place to rest your thumb but also make the devices look somewhat inelegant. The Nook HD+ also carries over the odd cut-out corner from the Nook Tablet, just in case you've got a carabiner handy. Both are good-looking, though, and solidly built — it's clear Barnes & Noble took care in their design.

There's also a lot of new software in the Nook HD lineup. The devices are based on Android 4.0, but as always with Barnes & Noble it's totally unrecognizable as Android. Barnes & Noble's skin is minimalist and reading-focused: there's a carousel of recent books and apps at the top of the screen, for instance, plus an omnipresent button for jumping to your library. There's a clever My Nook Today icon on the home screen, which you tap to bring up the weather and a couple of recommendations for things to read. That same recommendations engine is being used in the Nook Store, which is adopting a Pandora-like approach to try and figure out what you might want to read, watch, or buy. Amazon's recommendations system is based totally on purchase history, but thanks to its vast retail history Barnes & Noble thinks it has a better idea of what you actually want to read next. The tablets also have a smart solution for shared devices — you can set up multiple accounts, a la a PC, and one administrator can manage what books, apps, and settings each user can access.

Unfortunately, even though it's Ice Cream Sandwich you don't get the whole Google Play ecosystem; you're stuck with Barnes & Noble's curated list of apps. The app store is considerably larger than it used to be, and we're told porting apps to the new Nooks takes little to no effort. In general, the new software is a solid upgrade, though we'll have to wait and see how the devices perform: the models we tested were pre-production devices and were prone to plenty of stutter and lag, but reps promised the kinks would be ironed out before the Nooks go on sale at the end of October.

Video was a big missing piece for Barnes & Noble

Content may not have been the focus of the devices, but there's also a lot more to read and watch with the new Nooks. There's the new Nook Video Store, which fills a huge hole in Barnes & Noble's ecosystem; you can rent or buy HD movies, and Barnes & Noble even has a Whispersync-like feature that lets you sync your place across devices. Magazines are also being updated to HD sizes for the Nook HD+, and flipping through pages of National Geographic or GQ looked great on the big, bright screen. A new Catalogs app lets you browse through stores' offerings on your tablet — you can tap on an item to go to its purchase page or swipe down with two fingers to "rip" a page out and save it to your "scrapbook," and brutal skeumorphs aside it's a pretty clever feature. 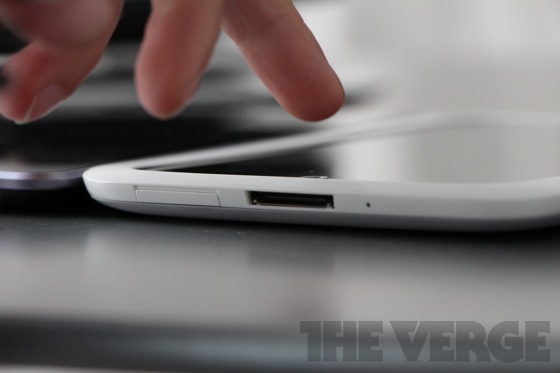 At the end of our time with Barnes & Noble, company CEO William Lynch sat down to give us the big reveal: the Nook HD starts at $199, for 8GB of storage (there's also a microSD slot for adding more space). For $229, you get 16GB of storage, and Lynch agreed with us when we wondered aloud why anyone would buy the cheaper model. The larger Nook HD+ costs just $269 for 16GB of storage, and $299 for 32GB. And, Lynch made sure to tell us, those prices are for ad-free devices that actually come with AC adapters (few opportunities for potshots at Amazon went unseized on this day). The future of the now-outdated Nook Tablet isn't totally clear — Lynch said the company's considering keeping it available as a lower-priced option, but a final plan hasn't been made.

Barnes & Noble's made no bones about its competitors now — it's after Amazon, Apple, and every company in between. The new Nooks best the iPad on price and the Kindle Fire HD on specs, but whether that's enough to overpower the two huge tablet brands remains to be seen.