Microsoft has revealed its Xbox Music service pricing through the Windows 8 Music app, at the same time as pushing out a beta Xbox dashboard update that gives testers a chance to try out the on-console interface. The service, which has yet to be fully unveiled, will offer unlimited streaming for £8.99 per month — the same price as a British Zune Pass — or £89.90 per year. We expect US pricing to mirror the UK's in matching the current Zune Pass pricing. To use the service on Xbox, you'll need to have an Xbox Live Gold subscription. A forum post on NeoGAF has also revealed that Xbox Music will offer a free advert-supported service similar to Spotify, along with a scan-and-match locker service — something we've independently confirmed to be true. There's also mention of a "single tier dual subscription streaming service," which could refer to a unified music and video package.

A unified music and video package could be on the way

A tipster that signed up for the Xbox dashboard beta program sent us photos revealing a 14-day free trial offer and parts of the Xbox Music interface. The UI doesn't throw up any surprises when compared to the current Xbox Zune app, and the planned additional features don't appear to have been enabled just yet. One thing that is new is a cloud icon labelled "Save To Playlist," which implies that you'll be able to sync playlists across all of your devices. Our tipster also told us that, at present, there's no backgrounding: music stops playing once you navigate back to the dashboard. We expect the service to launch alongside Windows 8 and Surface on October 26th, but hopefully we'll get a full feature list and pricing tiers from Microsoft before long. 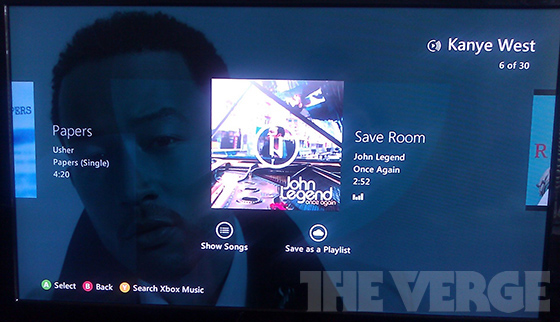